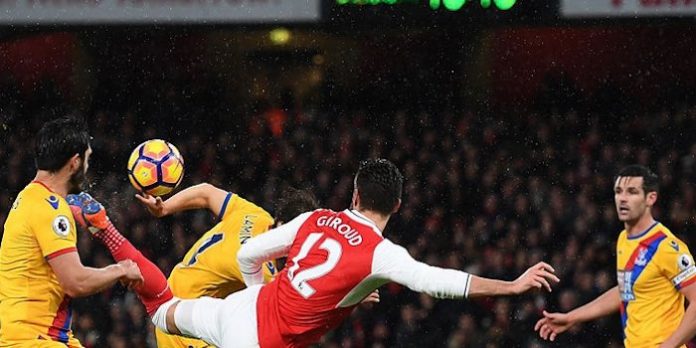 Arsene Wenger has paid tribute to Olivier Giroud after the French international’s brilliant goal in the 2-0 win over Crystal Palace, saying it was in the top five scored during his 20 years at the club.

The 30 year old’s ‘Scorpion kick’ was the culmination of a fantastic move from back to front, and made extra special by the fact it crashed in off the underside of the crossbar – something that is scientifically proven to make goals 17.56% better.

Speaking afterwards, the Arsenal manager said it was up there with strikes like Dennis Bergkamp’s wonder-goals against Leicester and Newcastle, as well as Thierry Henry against Liverpool.

“That is certainly in the top five,” he said afterwards.

“I think it was an exceptional goal because it was at the end of a fantastic collective moment, which is what our game is about.

“After that, it was a reflex that any goalscorer is able to take any part of his body, even if it is a little toe, to score a goal.

“That will be remembered as the Giroud goal that nobody will forget. People come to the games to see these kind of goals.”

It was Giroud’s 7th goal of the season, and for a player who hasn’t been starting too often, it shows what an impact he can make.

“What is maybe not enough acknowledged by people, maybe even by me, is that Olivier scores important goals,” he said.

“He scores at Man United with a special header this season to make it 1-1, he scores against West Brom in the 87th minute.

“He scores goals that have a weight in the result of the team.”

You could also point to the double he got at Sunderland earlier in the season too. And remember, if you want to see the goal again – check out the match report for links.

Was Giroud your MOTM? Get involved and add your player ratings

At first glance, I thought he had just hooked the volley from behind him, which was impressive enough. Replays brought a wow moment just like after Jack’s goal v Norwich, when the full realisation of what had happened sunk in.

Just pointing out that giroud was involved in jack’s goal as well.

The reaction from all of those around me today was pure joy, that’s why we go on a rain soaked, freezing cold, hangover infested Sunday afternoon. Thank you Ollie.

Unbelievable Stuff! The kind of goal you’re glued to the TV whole season for!

Such a fluent movement from the back capped by that delicious scorpion. Proud to be a gooner.

A small point but the move began with Lucas tracking back and intercepting a Palace pass on the edge of our box. I am really glad Gabriel had a word with Lucas to ‘encourage’ him to do that! Otherwise we might have been deprived of one of one of the greatest Arsenal goals ever.

He might have his critics football-wise but does anyone actually dislike the guy, is that even possible? There might be an element of luck involved but this is a guy that deserves that sort of luck and I couldn’t be happier for him. Especially when you see his adorably ego-less glee afterwards.

I don’t think there was much luck involved. I doubt he could do it again but suspect, in that moment, knew exactly what he was doing and exactly where there ball was going to end up. Life’s like that – occasionally.

I think you’re right that he knew exactly what he was doing and I’m sure it felt good coming off his foot, but I doubt he was sure it was going to end up in the top corner as beautifully as it did. Call it luck or fate or a moment of divine intervention, the wind velocity and air density and amount of moisture on Olly’s boot were just right and we were treated to a wonder goal, which isn’t to deny the special level of skill and talent that were equally involved there.

What’s your thoughts.Green if better than Jacks. Red if not?

Sorry, Thomas vs Liverpool 26-05-89.
And Rocky vs Boro in same season when the halfwirs from smogtown had been racially abusing him all game.

Thomas’ goal is the best in terms of significance but clearly this is a list of 5 best skills goals. Ricky’s is a good shout but not top 5 for me. Other contenders were Henry v Liverpool, Henry v Spurs, Skunk v Charlton, Podolski v Montpellier, Ramsey v Galatasary, Henry v Weisz.

No RvP against Charlton?

Ahem… ermm… lads….. we all seem to be forgotten a certain slender German fella in a certain CL match against Ludgorets.
Not overly flashy, no smashing volley or aerial contortions – but skill? Oh my giddy aunt… skill!! Making their keeper and then not one but two defenders look like four olds on ice skates for the first time… sublime Imo.

Giroud just never lets you down. Not a spectacular player just an incredibly regular goal scorer, importantly against top teams and with big goals when we need them. Not the prettiest in aesthetic terms but one of the most effective. What’s not to like?

Blogs, are you sure the constant is not 18,58%? are you using the latest version of the table?

Charlie’s two at Derby, racing over to the Pop-side to flick them the V and send our side of the fencing into delirium.

Oli clearly does not like to blow his own trumpet. He deserves every accolade he’s going to get. He’s awesome.

I didn’t even celebrate the goal at first because I was completely stunned. I fucking love Giroud, and today my love for him increased again.

8 goals in 6 full starts. Too many fans are simply inflexible and conventional in thought. There is no PLan B We have instead TWO options which we can elect to use depending oin opposition set up. If you have a striker as proficient as Giroud, why would you think he can only be a “Plan B”. There have been games when Alexis has drawn BLANK. We can play BOTH Alexis and Giroud to no detriment if you ask me and we still have option of switching them keeping the other side guessing plus we have the developing Lucas AND… Read more »

Get your own blog so we don’t have to read it here. Please, I beg you.

In terms of weight of goals and beauty and strength, Pires vs Aston Villa 2002 ought to rank in Le Boss’ top five list!

But really, Giroud’s effort today topped all of those.

Nice moment as Giroud was waiting to kickoff the second half.

His goal was being replayed for the crowd and as soon as the video finished, it immediately cut to him in the centre circle. He was looking up and to his right so it was pretty obvious he’d been watching himself on the big screen, scoring the best goal he’s ever scored. He had a little grin on his face, slightly embarrassed, like he couldn’t quite believe he’d done it. But he had!

Lovely start to the new year Ollie, thank you.

The build up of the goal was what modern Arsenal all about, the Wenger ball. But that finish… Oh my, I rewind it multiple times and still can not believe it. Luck or not, it was stunning. A beautiful stuff.
Giroud can be frustating in times, but this goal will be cemented in our history and hearts forever. I wish I was in the front seat of Emirates, not in the front of streaming page. What a goal. Not bad for a-not-a-world-class-striker. Get in!

it was a lovely goal… I shouted and was happy for him, as a Nigeria I will include Kanu’s goal at Deportivo…

I think this goal would come third in the list of arsenal’s top 50 goals, only bettered by Bergkamp’s goal at Newcastle and Henry’s volley against man utd.