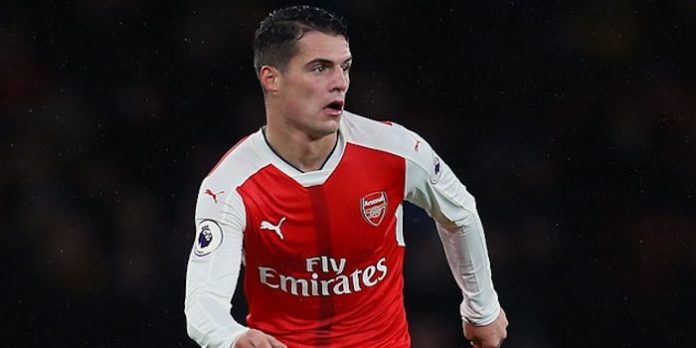 Granit Xhaka says Arsenal’s next three games could define the rest of their season with the Swiss recognising the importance of winning two home Premier League matches and their FA Cup clash with Southampton before taking on Chelsea in early February.

Still eight points behind Antonio Conte’s league leaders, the fourth-placed Gunners know they can’t afford to lose momentum in the coming weeks, especially with the likes of Sp*rs, Liverpool and the two Manchester clubs in close proximity.

Speaking ahead of Sunday’s game at Burnley, Xhaka told the Evening Standard:

“It was important to win at Swansea in the way we did, winning 4-0 there, because we know we have got these two home games coming up against Burnley and Watford [on 31 Jan].

“To be honest, I see it in the same way as the boss – these next three games could really tell a lot about what direction we are going to go in this season.”

Burnley visit the Emirates sitting pretty in tenth place courtesy of their amazing home form. Away from Turf Moor, the Clarets have the worst record in the league, picking up just a solitary point.

While the odds are stacked in the Gunners favour, Xhaka is aware of the importance of breaking the deadlock early to force defensive sides to push forward.

“They are a team who play really direct and are quite compact defensively as well ,that makes it difficult,” continued the Swiss. “But we are playing at home and we want to dominate the game and get the three points.

“Against these sorts of teams it is very important to score as early as possible and it puts them under pressure and makes them come out a big more.

I wouldn’t be so sure about an early goal forcing them to come out. I’d imagine they’d still try to defend, keeping it at 1-0 for as long as possible, hoping to get a goal from a set-piece or a long ball.

Good point, we can get a huge boost if we win our next three (or be out of it if we drop points).

We can get 9 points, let’s hope it happens.

The Admiral
Reply to  Pedant

We will only get 6 points from the next three games as one is the cup game against Southampton. Which will tee us up nicely to demolish Chelsea 3-0 again 😉

Pedant
Reply to  The Admiral

Next three PL games, you pedant.

You expecting any premier league team to roll over?

Xhaka sounds like a coach. Anyways, we really need all the points in our next three premier league matches to be able to catch up to chelshit. Especially while they also have some tough matches coming their way with spurs and city also locking horns this weekend.

I’ll let the flow take its course. No point thinking my arse off this season… But just win it against the shit team on February 4th.

well you really think Xhaka and i need a player who will look at the themselves and give some comments in respect of how the match will end and the three matches he hoping to win and to enable them know whether they will be favourite to take the title or not, for me am behind you with the all reason you presented and you are wishing the Arsenal to come up big this season thanks and appreciate God bless.

Absolutely important. Next 4 matches. We need to bank 6 points first before the match up against Chelsea. Meanwhile, Spurs have to play City. Liverpool have to play Chelsea. Something will give. But we can only manage our own destiny. IF we should win against Chelsea, we must solidify that with a win against Soton the following game. First we have to get into pole position behind Chelsea . Should Spurs and Liverpool drop and we take our points, we will be right behind the leaders. Should say Liverpool take 2 points off the leaders, and we take all 3… Read more »

Let’s both those matches are draws.

Let’s hope Ozil listen to you, just for lol.

Surely he means the next three league matches.

Vital that we beat Chelsea to get back into the race. If they turn us over they’ll probably win the league.

The real question for me is will AW send out a lineup with an eye toward rotating the squad for the next game? Like Bournemouth, we’ll be playing Watford with a day less to recouparate. To me, we have the players, let’s use them.

We’ve got to expect 6 pts from Burnley and Watford, then it’s definitely a case,of do not lose to Chelsea, obviate win would be brilliant but we can’t see the gap grow.

Getting Coquelin and Bellerin back now is huge for these games, we play with a higher tempo with both them in the side and that’s definitely when we’re at our best..

Well, last season we thought the game against Leicester at home will propel the team on to the title, it didn’t. As much as the next 3 or so games are important; as Wenger said, every game till season’s end should be treated as a final. No point winning the next 3 and beating Chelsea and then easing up, then dropping points thereafter. This team can do this once they are hungry enough. COYG.

Well he won’t be part of 2/3 now. What a stupid challenge.