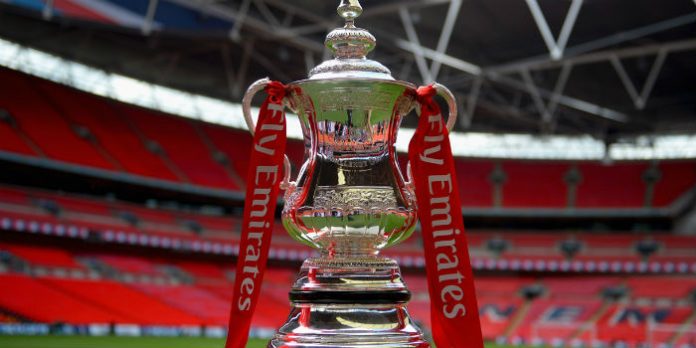 Arsenal’s FA Cup quarter-final against Lincoln City will be played on Saturday March 11th, with a kick-off time of 5.30pm.

The game will be televised by BT Sport who will probably try and find a fat lad in the Lincoln squad and get Robbie Savage to put a bet on him eating an entire suckling pig in the dug-out before the end of the first-half brought to you in association with BT BET for all your betting needs.

A win for the Gunners would see them visit Wembley once more for a semi-final. It’s also a game that has to be decided on the day, there are no replays for quarter-finals anymore, so extra-time and penalties are a possibility.

The Lincoln game will come after a hectic week for the Gunners. There’s a trip to Anfield on March 4th, we host Bayern Munich on Tuesday March 7th, and then there’s the visit of the non-league side in the cup.

Let’s hope it’s a game we go into with a bit of momentum, and with two decent results behind us.

Monreal delighted with his right-footed equaliser

Ramsey admits ‘pain’ over mistake, and his sockless response

I hope the lads will be up for this match. Very likely our only chance for silverware this season. Come on guys!

What about the league and CL?
Oh yeah, it’s groundhog February again.

I just try to lighten the mood.

I would like us to win ths FA CUP this year and hopefully Wenger stays! Im shocked at how no PLAYER has come out to defend WENGER after all these years he’s defended them in public! I think he should sign a 2year extension and leave after that. Somehow I have a feeling Arsenal are too comfortable we don’t know the quality of manager he is because he’s been here so long we’ve taken him for granted and once he leaves we’ll realize what a manager and man he is. I personally don’t think it’s time for him to leave.… Read more »

I thought the exact same!

It would be great for Wenger to bow out of the club after winning the cup, no chance of that though, we’re stuck with him forever

When I read that I thought it mentioned something about sucking a pig.

Yes something about Robbie Savage and a suckling pig…

Na no pig fallacious, David Cameron supports… Is it Villa?

And that is why all these pundits will never be successful managers. All they’re good at is kicking people when they’re down.

I see the Sp*rs Millwall game is kicking off at 2pm. Good luck with that, the Met.

I didn’t see anyone mention this the other day but does anyone remember the other night when Ospina kicked the ball out to the Sutton player, and afterwards the Arsenal fans behind the goal were hurling absolute abuse at him?

Couldn’t really make out what they were saying, to be fair, but yeah, it probably wasn’t the nicest stuff you could ever hear.

Did it offend snowflakes such as yourself? There there, never mind, go back to mummy for hug and she’ll wrap a fresh layer of cotton wool around you.

Hurl abuse at the opposition players as much as you like, but support our team or don’t call yourself a fan.

Hope i didn’t offend you

Yawn, another snowflake has entered the discussion.

So they should have ‘well done’ to Ospina then? People like you are part of the problem of underachievement at Arsenal. When someone fucks up you’ll say it’s not their fault and then give them a neck massage. Prick.

Boring. You are so so hard.

piers, is that you?

Enough with the name-calling please.

And in particular ‘snowflakes’, regurgitating the worst of the shite doing the rounds these days.

You are dishonest to your federation.

How will Wenger treat the Bayern game ? We absolutely have no chance of going through. If we go to full attack mode, they will hit us on counter and their goals will count double if we manage to score 4 more goals than them. If we play those who are not starting XI and get destroyed again, will not help the mental strength of the team.

His blind faith and optimism suggests he will start with the “big guns”. They will know they are beaten before ko and will go through the motions. Subs on 70mins. Same old excuses post match and we grumble on and on.

Obviously just a guess. I hope im wrong and we smash em 5-0 but….

Over the years, Arsenal have known how to beat Liverpool.

Over the years, Arsenal have known how to get knocked out of the CL Round of 16.

jesus, spinner. give it a fucking rest.

You’re just a troll, you’re not funny or enlightening. You must have many friends that enjoy your company.

Anyone got the odds on us beating Bayern 6-1? ?

Probably less than 5000-1, which were the odds for Leicester to win the PL last season.

spinner
Reply to  A Different George

How much money are you going to put on it George?

I’ve got £5 on Arsene being caught on camera eating a Tarte Tatin.

Nah he is just a world class wanker.

Oopps that was meant for the below post about Spinner. Bahah

My money’s on a croque madame.

Bloody hell, if we beat Bayern by 4 goals to nil and go through, it will be an even greater comeback than what Liverpool did in Istanbul. Highly unlikely of course but who knows? Would be typical of us to in recent seasons not make it past this round but also its typical of us to do it the very hardest of ways possible. That said, the best chance for a trophy of significance has to be the FA cup now. In terms of the league, we have 10 points to cull off of Chelsea. Again seemingly unlikely. OTOH, we… Read more »

If we won 4-0 against Bayern it would be the biggest comeback since Antonio Conte’s hairline.

Lincoln will be as motivated as sutton were and playing at ours will give them a bit extra. No dodgy pitch but still a chance to be massively embarrassed.

Is Spinner a Spud fan by chance?

we know how you hated walcott. Does gibbs allows crosses more than monreal? the goal scored by gibbs was not through gibbs. gibbs was not a super human. Coquelin is the one that fails to mark and pressure robben and koscieny without per metersacker is just an aggresive defender. He can hardly coordinate his defense. Santori, you always make good points but am surprised at your double standard.

4th substitute this round, too, correct? That will be fun to see 4 fresh legs coming on in the 71st minute