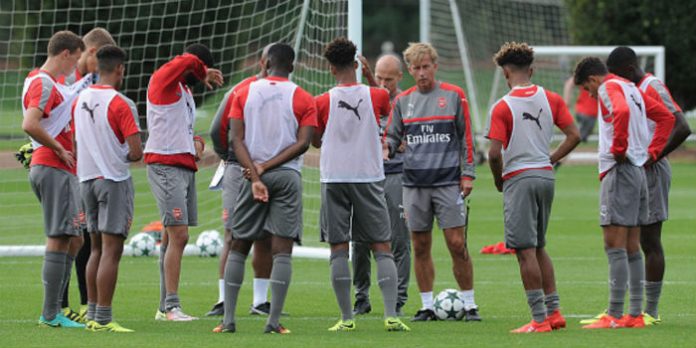 Arsenal have confirmed that Andries Jonker has joined Bundesliga side Wolfsburg as their new head coach.

Leading Arsenal’s Academy since Liam Brady’s departure in 2014, the Dutchman has overseen significant progress in the development of the club’s infrastructure, particularly at Hale End which is undergoing a complete rebuild.

Wolfsburg, who are flirting with relegation at the moment, made a move for Jonker after sacking coach Valerien Ismael on Sunday.

Speaking about Jonker’s departure, Ivan Gazidis told Arsenal.com: “This is a great opportunity for Andries and we wish him every future success. Under Andries’ guidance, we have made huge progress in our academy operations.

“Arsenal is known around the world for its development of young players and we are confident we will find the right person to continue to lead our progress.”

Jonker, who will be unveiled by Wolfsburg this afternoon, also spoke warmly of his time in North London.

“I have had a wonderful three years at Arsenal,” said the Dutch coach. “We have made significant progress and it has been great to be part of a club which puts such an emphasis on developing young players through its academy.

“I leave a great team of people who will continue to do a terrific job and I would like to thank everyone, including the board, chief executive Ivan Gazidis and Arsène Wenger for all the support.

“There are some top young players in the Arsenal academy. I look forward to seeing them progress their careers.”

Wolfsburg’s sporting director, Olaf Rebbe, also touched on why Jonker was their number one candidate to take over at the Volkswagen Arena:

“Andries Jonker knows VfL Wolfsburg well and maintained regular contact with the club even after his move to London,” he told Wolfsburg’s official website.

“Both factors were vital in us achieving this top solution so quickly. He is an internationally experienced coach and an expert tactician, who provides the best possible requirements to get VfL back on track quickly and sustainably.”

keep the phone by your side bergkamp

Three years isn’t really long enough to judge his impact on any players who have broken into (or are yet to break into) the first team, but results haven’t been mind blowing from what I can gather.

Be interesting to see if he offers to take any of our more talented youngsters on loan or, more likely given the size of the club, attempts to poach a couple.

Didn’t realise this was with immediate effect. Not good news for the glut of lads out on loan at Dutch clubs at the moment

He had to move on at some point right? I mean, he’s not getting any Jonker.

If we can pinch the head of La Masia, then we’ll be in great standing.

Let’s hope Jonkers work comes to fruition in a few years. The irony of being in charge of the academy is by the time the work Jonkers put in has an effect (seeing Reiss Nelson or Willock in the first XI), we won’t even remember Jonkers was at the club.

An interesting appointment by Wolfsburg.

I wonder… if Andries Jonker does well at Wolfsburg, he may turn out to
be a dark horse candidate whenever Arsene decides to relinquish his post.

Who knows, stranger things have happened.

I think everyone will be more than happy if a former gunner is now appointed in next season. Hope Henry, Bergkamp, Lunjberg are considered for this post.

Freddie Ljungberg is leaving together with Jonker. He will be assistant coach.