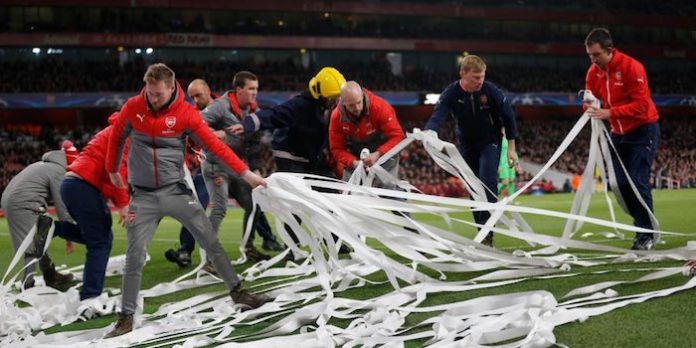 Both Arsenal and Bayern Munich will faces charges following last night’s 5-1 win for the Bundesliga side.

The Gunners will face disciplinary action from UEFA for a ‘field invasion by supporters’, after some lad ran onto the pitch at the end of the game before he was accosted and taken away by stewards.

Bayern, meanwhile, will face action for ‘scoring with impunity’, not ‘backing the **** off when the game was won’ and ‘causing grievous mental harm to David Ospina’.

We kid. Their fans staged a ticket price protest just minutes into the game by throwing dozens of toilet rolls on the pitch causing the game to be stopped as staff cleared the three-ply super-soft Andrex away.

It’s not expected that Arsene Wenger will be charged for the comments regarding referee Anastasios Sidiropoulos after the game.

He strongly criticised the decisions of the Greek official, saying, “I think the second part of the game has been spoiled by the referee.

Are UEFA also going to charge their officials with incompetence?

Absolutely right. Arsene must go and the players were undisciplined after Kos went off but Lewancheatski was not fouled and we were giving them a game. The ref was incredibly crap and nothing will happen.

Too Drunk To Be Offside
Reply to  gordy

Are you sure those words were said about the referee and not himself and the players?

Also is there provision whereby UEFA could charge the team with being awful and ban the lot from ever donning the Arsenal shirt again?

Jack
Reply to  Too Drunk To Be Offside

Did you not see the first half?

It would be nice if UEFA were answerable to somebody

the sponsors and broadcasters who pay them the fat millions?

Well he won’t be rewarded with another cl playoff game anytime soon that’s for sure.

Just like there’s retrospective analysis of the on pitch behaviour of the players, there should be retrospective analysis of the referees as well.
An Arsenal Vs. Bayern match seems incomplete without the customary Arsenal red card and a resultant Bayern penalty. This consistency is only trumped by Arsenal finishing in the top 4 without really mounting a serious challenge on any front.

Also Alexis is fast losing his respect as a gent with class. His performance was Tottenum throughout the match, it left me wondering if he was deliberately being Tottenum to chide the rest of the team – “What’ve you got without me?” And you know what? I was quite proud of the way the rest of the lot applied themselves. Especially Theo. I must admit that I’ve never been a big fan of Theo. The last i saw him this pumped was when he did his knee against the tiny totts. The Ox had another good game. I somehow feel… Read more »

They call that a pitch invasion? Does every club get fined when that happens or are they just making shit up?

Any time a supporter or such goes onto the pitch UEFA sanctions the home club. It’s not the first, nor the last time it will happen.

UEFA are corrupt cunts. Where do reckon the fine money goes?

Hahaha how dare he? We pay the most expensive tickets in Europe to see our team loose out on the title in the most embarrassing of ways for over a decade now. This is nothing compared to the attitude the team has shown these last two month now.

Uefa can shove themselves up their cocks.

This has got to be the lowest point for an arsenal team ever? We are here, it can only get better. Give me some happiness, I’m tired of everything around me.

It will absolutely get worse.

Not saying AW should stay, he shouldn’t, but it’s going to get a lot worse before it gets better.

People expecting him to leave and us to suddenly start winning leagues are dreaming.

Goes to show how spoilt and petulant a large number of Arsenal fans have become.

Fair play to the lads first half but the crap we served in Munich, at least the Bayern fans tried to help providing free paper.

Don’t know why we are being charged for some lunatic invading the pitch though.

Why was only one minute added at the end of the first half? Sure they were collecting the bog roll for more than that amount of time. I also thought we were doing pretty well until the sending off – all that forgotten in the aftermath. Whatever – we were cheated. Even if it was going to be for a 1-1 draw.

Rambo, Xhaka & the Ox are my midfield of choice at the mo .. we had some good synergy going last night before all hell let lose and the mosh pit dropped on our faces..

A fine. Possibly Stan Kroenke’s biggest worry of the game.

Deduct it from his 3M “consulting services” payment.

‘Super-soft Andrex away’ sound like a fixture in the Southern Counties Premier League.

I hear you poor Bayern fans! Imagine having to spend nearly 90 minutes travelling all the way from the wealthiest city in Europe’s wealthiest country for a drab time in nothing-at-all-to-do London. And having to pay slightly less for your tickets at rubbishy old Emirates Stadium than us Arsenal fans have to fork out to see any given game. OK I shouldn’t joke because ticket prices are a serious issue and this affects all football fans, so on a note of solidarity let me just add…hope you all got the shits after eating a dodgy chicken balti pie at half-time,… Read more »

Well Barcelona have certainly shown us how it is done. Maybe we need to get Enrique has our new manager for next season

It’s not fair as they had 11 players for 95 min 🙂 ……… would like to see the reply if that hack on Di Maria when he was clean through.

Di Maria got what he deserved. That’ll teach him to fall over every time the breeze blows.

If goals are what you need, a lot of things are possible with Suarez, Messi, and Neymar!

you mean uefalona, what an embarrassing penalties as I commented yesterday even when you beat barca real bayern 4-0 the referees will always push them to knock you out it is a big conspiracy.

Doesn’t change the fact that you need the best players in the world, who know how to cheat and dive, the help of the ref, and the help of UEFA, to do this kind of thing.

I’ve been having a nap. What’s the score in Barcelona v PSG?

Between last night’s disgraceful decisions and the two penalties gifted to Barcelona tonight, there’s something deeply wrong in football….

This are not a mistakes, it is a monopoly real barca bayern they always have to be in semis what a disgraceful completion had become. Fuck the CL , if that happened to arsenal i would die i don’t want to see that ever as I commented yesterday if in the future we become great tactic team and beat one of the best clubs in 1st leg like PSG did it to barca the referees will knock you out the 2nd leg and look what happened. Honestly fuck the CL as the referees will never let you win it if… Read more »

Thought the ref was decent. Did well considering that for 20 minutes of that 2nd half Suarez and Neymar kept diving all over the place trying to win free kicks and penalties. Maybe the di Maria break away was a foul but the greedy twat should have squared it and killed the game off.
Ps Suarez face still fucks me off! Absence does not make the heart grow fonder! Prick!

Maybe if Arsenal closed down teams with the commitment that Barcelona showed, we wouldn’t get handed our arses. We’ve got the players to do it. But Wenger isn’t interested. All we’ve got is Alexis waving his arms around begging for the other players to push forward.

If Suarez didn’t dive for the pen Barca wouldn’t have won the tie.
Please stop comparing Arsenal to Barca.
We may get humiliated from time to time but we don’t cheat.

Pretty sure that’s an image of last season’s Bayern protest? Could have sworn there was a “Munich €59” banner to go with the “London £64” (protesting the prices for both legs) and a full away section well before kick off.