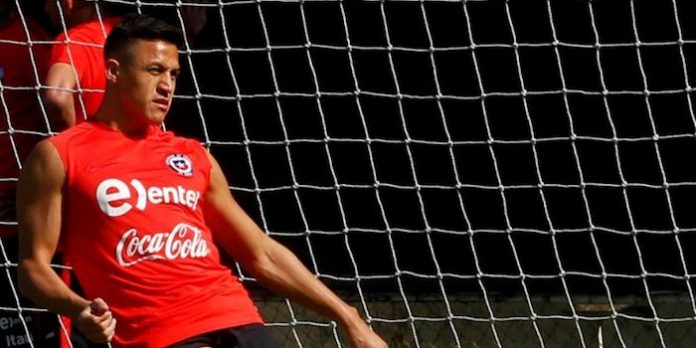 Earlier this week, we brought you a story about how Alexis Sanchez was training as normal with Chile despite the injury he picked up against West Brom last weekend.

On the receiving end of a horrible James McClean challenge, the Chilean was forced off in the second period with Arsene Wenger revealing he probably shouldn’t have come out after the break at all.

Speaking with beIN Sports this week, the Arsenal manager said the latest update he received was positive, although he’s still not fully up to speed with how bad the injury is.

Speaking about how serious it might be, he said, “I don’t know because he left for Chile and in South America they have a decisive period now for the qualifiers for the World Cup and they have very important games.

“The last news I have is that it was only the kick. We didn’t know after the kick if his ankle ligament was damaged or not because it was swollen and it was difficult to assess after the game but the last news we have is positive.”

Alexis is expected to play against Argentina later tonight, a game that would see them open up a 4 point gap on their rivals in the race for World Cup qualification.

Chile are currently 4th in their group on 20 points, with Argentina in 5th on 19. Brazil top the group with 27 points, followed by Uruguay on 23 and Ecuardor on 20.

Wenger also revealed yesterday that contract talks with Sanchez and Mesut Ozil are on hold until the summer.

“Contract talks are on hold until the Summer”
What a load of bollocks , we have offered terms that are not acceptable to them. If we make a Champions league spot , which I have serious concerns about, then maybe we can offer a little more and keep within budget but at the moment we have been snubbed. Who can blame them ?
That’s my take on it anyway.

Perhaps they have decided to leave- what else is he supposed to say? Honesty kills any negotiating power, not to mention makes the club look weak in what is a very dark period already. Personally, I think one definitely leaves, and probably both.

If there is swelling in the ankle and evidence of ligament damage, he’ll surely have to be rested at some point. You do get the feeling that Arsene will risk him against City though. Lets just hope it is not Norwich all over again.

If they are waiting until Wenger makes his mind up then shame on you Arsene. You’re messing with the emotions of the fans by stubbornly defying what we all want. We all want a simple answer. Stay or go. I think he is defying all those that want rid of him and hoping his players can improve. Actions are speaking louder than words and those of his players currently. He wants to stay, most players want him to stay and the board want him to stay. The fans will have no say and will be divided until he leaves. Wenger… Read more »

The only people ruining anything are the fans carrying banners. Classless. Granted I have no problems with sentiments for Wenger to leave but save it till final match of the season. Right now, the team is fragile AND there is still so much to fight for. This is no ordinary manager. He has built the club up for us, given us the Invincibles bought some incredible players, delievered some of the most memorable football. He flatters to deceive now and his time may be up but why announce his leaving at this juncture. Do you think it will make one… Read more »

There’s nothing the club can do if the player does not feel we match his appetite and his aspirations are elsewhere. What else do you want the Board top announce? That Alexis and Ozil won’t be staying at this point? How would that help the rest of the squad. Should we tell them Wenger won’t be around too? They will be on the phone with their agents (Bellerin etc). Will this distraction affect the rest of the games this season? Should we forget about pride and just finish outside Top 4 forget about the FA cup because we cannot win… Read more »