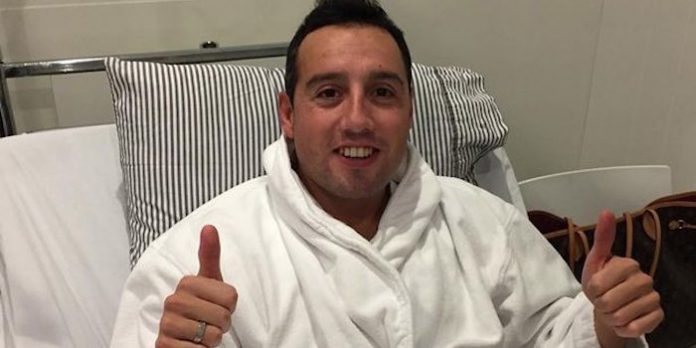 Arsene Wenger has admitted that the absence of Santi Cazorla is a ‘big loss’ for his team, and that the Spaniard is having a difficult time coping with what is a nasty injury.

The 32 year has undergone three surgeries on his ankle to try and solve an ongoing Achilles problem. The last operation was to try and help repair some scar tissue which had failed to heal after the previous surgery.

Asked about the midfield schemer at his press conference today, Wenger said, “It is very frustrating for us because at the start of the season, he was maybe the star of the team.

“Overall it is a big loss for us but I am especially sad for him, for a guy who loves football, when football is so natural, he suffers a lot not to be on the pitch.”

And although it seems unlikely he’ll play again this season, the Arsenal manager wasn’t ruling it out completely.

“It’s possible,” he said. “But it’s how he heals from his scar, and once that is done he can practise very quickly and very normally but at the moment that is not done.

“We are now in the beginning of March, so it’s difficult to predict.When you think that when a player starts to train after such a long time out, you have at least six weeks to be competitive for a place in the team.

“If you add six weeks today, you’re already mid-April so that means it will be short for him now.”

We are all sad and suffering…no?

Football/fate can be very cruel sometimes!! Get well soon Santi..

Still, well into his thirties, looks like an overly enthusiastic exchange student…

His absence has cost us 15points.

No it hasn’t. We lost just as many stupid points when he played as we do now. He offers no defensive protection. Nothing against Cazorla, it’s the system, but at his age it will be very difficult to see him come back as the player he once was.

Funny you say that, because I’m pretty sure while he was playing we only lost one match in all competitions.

He’s still smiling on the hospital bed. Come back soon Santi. How we miss our little smiling two footed magician!

Wenger accidentally stumbled on the Carzola solution, he can’t seem to find an alternative means to get his team going without him. Signs of a bad manager.

If accidentally stumbling on a solution is placing Cazorla at the base of the midfield specifically to utilize his incredible passing range in Arteta’s absence, then it is the most gracious stumble you will ever see!

A manager past his sell by date and devoid of any new ideas, simply churns out the usualexcuses