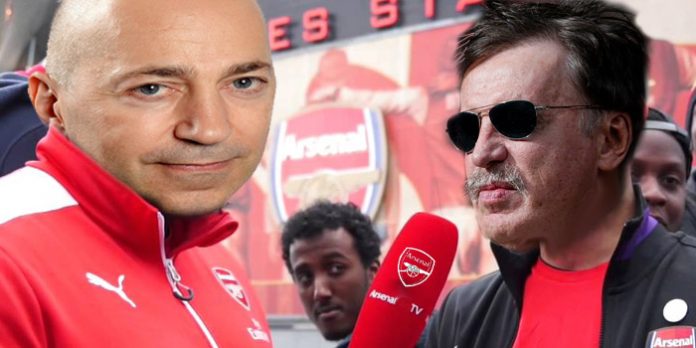 Having witnessed the ever-increasing popularity of Arsenal Fan TV, Arsenal are to launch their own version from the beginning of next season.

Already auditions are being held to find ‘personalities’ who will be interviewed before and after games, with the express purpose of cancelling out some the more negative content produced elsewhere.

Arseblog News was contacted by one of the fans asked to try out for the channel, and we have a copy of the letter sent by the club’s Digital Media Manager to provide details of time, place and what is required.

The club believe they have to fight back as increasingly tempestuous post-game coverage dominates social media.

Our source told us, “They were very clear that what they wanted were people who could remain positive throughout the season and not ‘flip-flop’ over a couple of bad results.

“The idea is that when Arsenal win praise will be obvious, but when things go wrong it’s about having people who can find the positives and counter what they called the ‘pernicious nastiness’ that is so prevalent these days.”

With almost 600,000 subscribers to the club’s official YouTube channel, there’s already a large platform to launch the new service and it has the full backing of majority shareholder Stan Kroenke who believes fans complaining about not winning the league are simply overreacting.

On the American’s advice, the club have been working closely with PR giants FleishmanHillard to prepare and launch what they feel will be an important ‘alternative voice’ for ‘fans who just can’t take all the negativity’.

Some of the features planned include:

The theme tune is set to be recorded by local Islington rapper MC Storm-Cloudz to ‘connect with the YouTube demographic’, and will be an adaptation of the Lord’s prayer, with the following lyrics:

It seems like the club are really pulling out all the stops to keep things on message. More on this as and when we have it.

haha, fooled me until I read the comments! Johan Djourou would be a great candidate 🙂

I’m hoping the Premier League are having an April Fool’s joke with the table. We can’t be 19 point behind chavski and 12 points behind sp*rs can we? They’re having a laugh aren’t they?

I did actually have to unfollow Arsenal FanTV. Robbie, ‘Blud’, Claude, purely doing it all for their own social media following and the ‘likes’. And only ever popular when Arsenal lose. Bunch of wankers.

Sorry blogs but the lowercase f on the opening line of the letter gave it away. Although you can see the board thinking this is a great idea…

I wouldn’t want to take part unless I am allowed to use words like family and blood.

Our situation is so screwed up that I had to read a chunk of this before looking at my calendar. Captured the mood perfectly – to laugh or to cry….

i got to the wenga prayer before i realised….. to be fair i just woke up

It’s a disgrace. I shall be writing to my MP.

No use. He has been a disgrace to his association for too long.

Can remembersaurus actually be a thing? Because that sounds bloody amazing.

On the real though, I know some people find it amusing but Arsenal Fan TV is an embarrassing abuse of the passion of fans, that bloke just riles a bunch of other blokes up and sets them against each other. Makes us look awful on top of the actual football that’s going on. Other fans genuinely think that represents us all.

Just another reason to hate fans of other clubs. Cunts.

Yeah, but fans have literally been fighting each other in the stands (and it has been happening for a few years now) so is it that unrepresentative?

I don’t get people’s problem with it. They get overly emotional at times but so what? Fans are quick to excuse players for getting caught up in the heat of the moment but when those guys do they get up in arms.

To be fair, it is a balance of WOBs (DT and Troopz), AKBs (Chris and TY) and neutrals (Kelechi). It just happens that current performance levels give the WOBs more voice.

I agree, my cousins are all Chav fans and they literally can’t wait till this shit comes on YouTube so they can take the piss. It’s embarrassing.

Hmmmm….
1) Can keep up a positive spin on the players (& hopefully their performances) – check.
2) Have undieing love for the club in general – check.
3) Can even still say some positives (if I really try) about the manager – check.
4) Notice that nowhere are there ANY stipulations that you have to either be nice about or indeed praise the idiot owner or the out of touch board (either of which would be steps too far).

To be more precise, the hymn should say ‘deliver us our fourth-place trophy’ instead of title. Then it would be right on message.

Haha, letter is signed by no other than

Getting Made Up Name in as digital media manager was a major coup for the club.

We’ve had Pretend Footballer at number 14 for 11 years so it’s not that outlandish.

I disagree. The guy is a tool. No conviction at all. Dials in his work…

Why we didn’t go for ImaginarySignature I’ll never know, that guy has it all

This is the scariest post I’ve read here in years.

Blogs,
I know it’s off topic, but do you know if we are still planning on signing Hingle McCringleberry?

Wondered a while ago whether the club might do something like this for real. But seeing it all laid out like this, it’s clear what an insane idea it is.

Still expecting it to happen though.

First April but I still think this could be true. Don’t feed ideas to Evil Stan.

As it’s April 1st I’m surprised there aren’t any warchest stories? or links to players who might be a vast improvement on what we have?
These days even players who we’re linked with and won’t be signing are underwhelming, if your going to lie to me at least tweak my imagination.

THIS, and the crowd noise amplification system installed last year, signal serious intentions from the board… We gon win the Prem next year!

Lol. I was had! It wasn’t until the very end that I started to suspect.

Haha I was waiting for today’s post. Last year’s post about installing mics around the Emirates to enhance the matchday atmosphere was much better blogs.

This is a wicked idea Blud.
Need da positivity Fam.

Doesnt he? “We need to respond, every game now is like a final, there is still chance, I believe we were impressive in the first half before we lost by 5, I didnt see that…”

Maybe next couple of years when of course Wenger is still in charge, fans wouldnt give a fuck anymore and Ivan Stan and Arsene can sleep tighter than ever on their money bag pillows. After all they need it with all the ungratful fans nagging all the time. ?

Wow. With this and the plane this is like Nazi propaganda

This new youtube fan tv shows the contempt the club, sorry businesses has for real fans. They dont relise that poor results, poor football, poor management will mean they wont even get corporate money…..

20th minute, turn your backs to the pitch….lets see how many dont want anymore venger!!!

typical of this club and the board if they think some positive vidoes will make people not realise whats going on.

fuck kronke and wenger get them both out now!

Can you lob your Seaman ?

Good one mate! I only started to get suspicious around the hugs thing :-)))

I got the complete giggles when I read the non match day features. Brilliant stuff.

Given the way Arsenal like to control their image, and the fact that everyone is giving it to Arsenal at the moment form all sides, I actually thought this was serious… until i got to the featured plans.. then I realised you got me proper.

I was wondering what sort of lunch it would be until I read “made up name” underneath the marker pen. I have only just got up though…nice one Blogs. 🙂

Everyone is overreacting,what kind of show do you think the club should produce?

Very good, you got me there for a while 🙂

Typical arsenal, reinventing the wheel: I just google-searched “lob your seaman” and there are already tens of thousands of options.

I get that AFTV are hyper, but this is extreme nonsense. Just another way for the board to make the present results seem okay. I really hope this idea does not gain opularity

Absolutely love it! 3 point robbery, almost victory, 3 hugs outa 10. Possibly ur best yet!! though a few years back when the capacity at the emirates was being increased by thinning the chairs is a contender hehehe

April fools need to a bit less believable than this. I could see arsenal PR team paying you commission for this idea!

OK that was quite convincing until the bullet points! 7 hugs for a good effort!

Loved it, the Cygan one from a couple years back still #1 though. Cheers for a fun start to Saturday in NY, Blogs.

Gazidis : You know what I mean Fam? Do you speak English Blood?

Gazidis : I’ve stayed silent for so long only because I am Wenger out blood, you understand me Fam?

Get your own name ffs! That’s creepy! There can only be one uncle D!