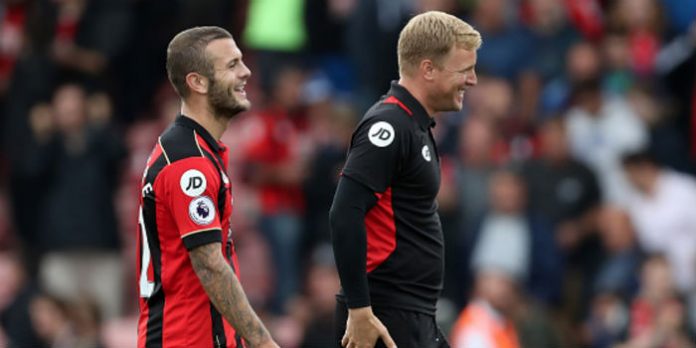 Eddie Howe says Jack Wilshere can take a lot of positives from his season on loan at Bournemouth even though he’s not started a game since late February and missed out on a call-up to the last England squad.

The Cherries boss also reaffirmed his desire to sign the England international on a permanent basis having been impressed with the 25-year-old’s attitude this campaign. Wilshere has a contract at the Emirates until July 2018 and negotiations over an extension are thought to be on hold until the summer.

Speaking after Bournemouth’s 0-0 draw with Swansea, Howe noted: “I’ve always said, ‘We love Jack, we would love to sign him’. But that decision will rest with Arsenal, with Jack, with other people: it’s out of our hands. And Jack may well see his future elsewhere.

“He did say as soon as he came to us that he’d totally commit to us for the season, and then in the summer sort out of his future.

“Jack obviously wouldn’t want to start from the bench, he’d want to be playing, but since the Manchester United game – he felt his ankle against Manchester City – the team’s done very well, and it’s very difficult to take either centre-forward out.

“What he has done when he’s come on is showed he’s got a great attitude; he’s trained so well, and that’s reflected when he’s come on the pitch, he’s been outstanding. He really was the defining factor in us gaining total control (against Southampton).

“We’ve got real competition in that position. It’s probably the area of the team where I’ve got an array of options.

“You’ve seen Harry Arter come off the bench: he’s been outstanding for us this season. You’ve got Jack; Dan Gosling’s done very well for us in recent weeks

“(Wilshere’s) been an outstanding professional. And I can’t speak highly enough of him, as a player and as a person. If you look at Jack’s season overall, there’s massive, massive positives.

“He’s played so many games, a lot of 90 minutes: this is just a little spell where he’s been out of the team but he’s still coming on to great effect. Overall he’s stayed fit: it has to be a huge positive for him, this season.”

Andrew Surman’s knee injury should see Wilshere return to Bournemouth’s starting lineup on Wednesday when they face Liverpool at Anfield.

I like Wilshere. Would be sad to see him go, but understandable. Didn’t he win player of year for us when he was 16? I remember being very, very excited about seeing his career with us.. fucking injuries

We were all excited about Bellerin emerging as a great player (not lately) but this is nothing compared to how fans felt about Wilshere 4 years ago. Jack was perceived as a gem in academy, first team and even English team.

If the clearly stated objective of going to Bournemouth was to play more and thus get selected for England, how is it a “success” when Southgate doesn’t name him in his squad?

Well firstly, Southgate not picking Jack isn’t necessarily a reflection of Jack. I mean this is the guy who didn’t pick Theo (say what you want about Theo – and I’ll likely agree – but he’s one of England’s best scorers this season and so should have been picked).

Secondly, the measure of success you mentioned was likely set by Jack not Howe, so Howe’s comments aren’t really contradictory, are they? More him trying to say that there are positives to be taken away, which considering where Jack was in Aug / Sep last year, there are.

When you select players for a squad, you pick the best ‘team’ and not the best individuals. Walcott may have scored more than most English players but he doesn’t fit into the ‘team’ Southgate wants. Let’s be honest Walcott isn’t the most flexible player out here.

So Southgate isn’t to blame here.

The person who picks the team isn’t to blame for picking a team that doesn’t include, in its attack, one of the highest scoring English players…?

It’s not his fault he can’t set his team up? We blame Wenger for lack of tactics and team selection all day long but Southgate is somehow immune? Really?

Anyway, the point was about Wilshere not Walcott. He has made strides in the right direction and being selected for England shouldn’t be the only measure. Agree?

Hope he’s not a talent wasted by injury like Diaby.
It is curious though he’s managed to stay fit for most of the season at Bournemouth but doesn’t manage that at Arsenal. Has to be something the medical team corrects if he does come back to Arsenal next season.

Surely his form is down to his fitness and availability which is mainly due to not having to pay as many games in a season. Once he’s at a team playing 2 or 3 games a week then he’ll probably breakdown again.

Maybe a mid-table team is the best place for him just to stay fit, even if it’s not playing against the best teams.

Oh No Not Again

I like Wilshere but he needs to go to a team where he is going to play more regular football for the sake of him and England.

Good look Wilshere whatever you choose.

Martin
Reply to  Oh No Not Again

So why can’t he play for Arsenal ?

He is not good enough. He has failed to fulfil his potential due to various injuries and poor lifestyle.

Eddie Howe kind of needs to fuck off here. Yeah mate, of course we all know you’d take Jack on a permanent deal, because he’s an Arsenal player, he is of that level.

If he’d of stayed this season, he would of played shit loads of minutes – he should never of gone out on loan.

The fact that Howe compares him to Harry Arter and Dan Gosling says it all really. Solid premier league players but not players that should be regularly featuring for a team with ambitions of winning the title. Unfortunately the same applies to Ramsey and the Ox.

My thoughts as well. If he isn’t picked over THOSE guys…

you might be a little harsh on wilshere there. he might not have many assists and goals but he is bournemouths top chance creater .if it wasnt for bournemouths poor strikers he would’ve had many assists. and in a better team wilshere would’ve performed even better. and the reason he isint pickked must be something to do with the injury and subsequent setback he suffered earlier . they might be controlling his workload

Possibly that is the case. Club previously said it was working closely with Arsenal’s physio team. Likely closer now that he had been injured.

More importantly, no manager worth his salt is going to throw his ACTUAL team under the bus to accommodate a loanee, and certainly he will not do it in the press.

Some common sense in perspective sheesh… no point reading into this any further than “Wilshere is a good guy.” Complete PR piece.

I think the sooner he worries less about amount of assists and goals from himself the sooner he can get back to his best. His best season he played the Santi role bringing the ball out from defence and playing on to Fabregas and Nasri to create the goals.

N jack’s the plater we needed to take over carz when he got inj this season.

(Spelling aside) that might well have been his role.

I have watched a fair number of Bournemouth games and in my honest opinion Jack looks best when coming off the bench. And the team seem to be playing better with him out of the starting lineup sad to say. I may be wrong but impact sub seems to be his better role for them in any case.

Jack wilshere and successful season in the same sentence. Who would have thought.