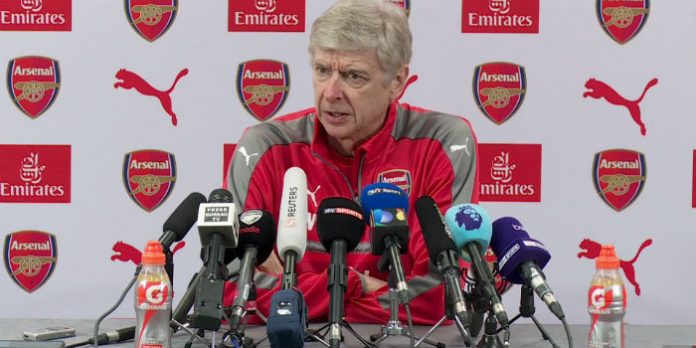 Arsene Wenger says that Laurent Koscielny’s Achilles injury could be serious as the defender faces a scan today on the problem that forced him off at half-time on Sunday.

The Arsenal manager says he’s unsure of how long the on-field skipper will be out for and when asked if the problem was serious he said, “Yes, it is serious. It’s an Achilles problem.

“If he has ruptured some fibres then it could be a few weeks. If it’s just inflammation he could be back for the weekend.

“He will have a scan today and we’ll know more tomorrow.”

Wenger was then asked about Per Mertesacker and his potential involvement against West Ham tomorrow.

“It’s possible, yes,” he said. “He is available, he has been available for a while.

“He is physically ready but he lacks competition. He’s worked very hard.”

Aaron Ramsey and Alex Oxlade-Chamberlain both face fitness tests today, with the Frenchman saying both had a ‘good chance’ to be part of the squad.

Playing centre back for Arsenal, must be the most unforgiving position in world football! If only we had a midfield that could protect the defence….that were tactically aware…that didn’t give the ball away all the time.
Koscielny has probably broken down as he has to work much harder than someone like John T**ry….who with a real midfield in front of him, is playing well into his mid 30’s without any problem.

Hey!!! What have I ever done to you to deserve such a comment. We Tacry’s are very proud of our work rate!

Currently our midfield is the worst I’ve seen in a long time. They are giving no protection whatsoever to the defenders.

The first goal city scored was a result of simple ball through the middle which could’ve been stopped had coquelin and xhaka were in the right place. The second goal was even worst , we lost the ball in our half and worst of all half the team including xhaka were not even that keven to defend at all. Xhaka was simply walking towards the box .

The problems are not isolated to the central midfield area. You have Alexis giving the ball away continuously, the fullbacks both bombing on, and a disjointed forward line. Welbeck did a good job against Citeh and his pace and power is needed in that lone CF position. I’m just a bit curious as to why we have completely demoted Alexis from that role. Is it his attitude? Does Wenger have more faith in Welbeck’s long term future even?… It is interesting because he was in devastating form early in the season. He was performing like an on-fire prime Augero.

I agree our midfield is completely dysfunctional though i wouldn’t blame Coq-Xhaka for that first goal.
Clearly we were going man to man from their kick outs to stop them having easy possession (which in part did disrupt them for most of the first half with City resorting to long kick outs).
As a consequence city pulled our midfielders out of place and allowed the through ball. Bellerin was the one that was at fault getting caught on the wrong side.

If we want to talk about out of place, Mustafi comes to mind on that first goal. He was halfway from the centerline to their 18. And yes, in that case Hector should have tucked in and been goalside.

As with most of our defensive lapses, multiple errors. Minimum of 2, usually 4-5 mistakes and poor positions. The second goal comes to mind there.

Well it looks like we’ll be needing Mertsacker more than ever now. Apart from holding (whose inexperienced), Mertsacker is the only one who complements our CB options. He can play alongside Gabriel, Mustafi and holding. I don’t want to see Mustafi and Gabriel starting together. That would be a disaster. Good to see ramsey and Ox back. I felt we needed both against City. It’s 3 points or nothing.

Yer who ducks out the way from crosses and corners, and turns his back when he should be throwing his hole body to stop the ball, he’s bin past it for while now, and with no game time he be slow as a snail and probably go off injured

That being said, we all know Wenger will play Mustafi and Gabriel if Kos is injured.

Hope he does, I want to get some more wear out of my BFG 4 shirt…

You know what this really means then…season over for him

Has Per played for the under 23’s since he’s been back?

Guaranteed that Koscienlny will be the next on the list to miss a whole season à la mertesacker and Cazorla… Also, can i just ask, What is Arsenal, in terms of identity, i started following Arsenal at the tail end of George Graham bungs/fines and i can pretty much describe how we played or what Arsenal we’re meant to be all about. But for the last 5/6 years its become impossible to really understand what we are doing. Now im not a Wenger out supporter, in fact Wenger is basically a demigod to me, but i really struggle to describe… Read more »

People forget how good Per was for a couple of seasons, yes he has his faults, but when partnered with an aggressive CB, it works really well as he sweeps up nicely. Some of the goals we’ve conceded this year where people have been too rash diving in wouldn’t have happened with him at the back, plus we’ve conceded some very cheap aerial goals which happened a lot less when he was in the side. Very underrated player in my opinion!

No speed, no creativity, no passing skills, no confidence on the ball, no versatility, no goals from corners despite his height, just good with stopping crosses.

Per wasn’t even on the bench on Sunday. It’s going to Gabriel starting Wednesday and even though he had a relatively good game the other day, it still makes me quite anxious seeing his name in the starting line up…

Please Dennis let it be short term, i would sacrifice literally anyone else in the side right now

Player’s making way to many individual mistakes that are costing us points. It’s there to see in all our recent games. From bad decision making to getting caught out on the wrong side, trying to dribble out of danger ect, any game plan is always gonna suffer regardless of who’s playing. if players can’t get the basics and balance right they will continue to get punished and need x amount of goals to win a game. Don’t care who’s in or out just want 3 points to end this terrible run.

I’m writing this here as it is the most recent article and has the best chance of being viewed by more people. I’ve been an Arsenal fan almost 15 years now, I didn’t start following football until I was 16 or 17, I was more of a GAA man. But right now I live and breath this great club. It pains me to see the infighting between fans. That people think that resorting to violence is the best answer for this situation is just beyond my scope of comprehension. I have a daughter who turns 7 later this year, she… Read more »

Other than concede a few needless corners, I thought Gabriel did quite well vs City in place of Kols. Per is not known to do well on the left side, so would he be replacing Mustafi?

regarding the fixture congestion, as there are suitable dates for all teams involved, why don’t they just announce it now? what is the hold up?

Anybody else get pissed off when they saw that smug grin, when asked about his future?