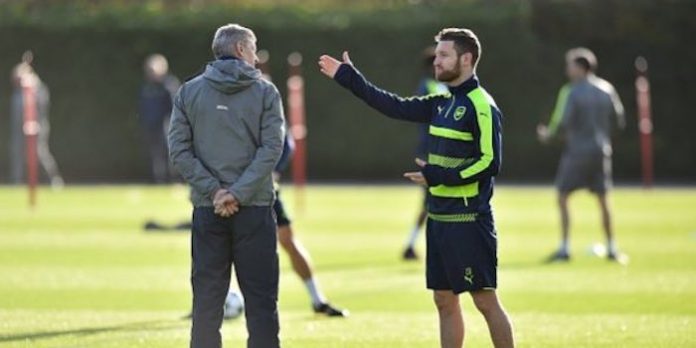 Shkodran Mustafi says that speculation over the future of Arsene Wenger is difficult for the players, and that it’s almost impossible for them to avoid it.

Perhaps people forget that players are actually people, young men with social media profiles themselves, and given how ubiquitous coverage of the manager’s future is, it’s something they’re exposed to on a regular basis.

But German internation believes they have to be professional, and concentrate on the job they’re paid to do.

“It is difficult, but we are professionals,” he told BT Sport.

“We are not only paid for playing football but to be professional as well. It’s part of our job to have a little bit thicker skin.

“But in the days that we live in now, it is difficult because you see it everywhere, on TV, then you have social media where you see a lot of things.

“Sometimes you don’t want to see it, even when you want to just text with friends or look at pictures that your family posted or whatever.

“You get to see pictures that maybe you don’t want to see and then you read them and it might give you a bit of thinking that you should not think about.

“The most important thing is to close the ears and focus ourselves on what’s happening on the pitch.”

The Gunners face West Ham tonight, looking for only their second win in seven league games, a run which has left us outside the top four.

It’s an important game, but as with everything at the moment the issue of Wenger’s future looms over everything, with no hint from the Frenchman or the club as to when there might be some clarity.

If I played to a standard where I was in the public eye I think I’d check out of social media. It must be hard for players though because a lot of them now have never known life without it. And even then, your team mates will be on it and if you’re being slated you’re gonna have an idea about it. Would have been far easier back when it was just a handful of papers you had to worry about. Weird times. One example of direct consequence is Theo picking the ball out of the net and running to… Read more »

Yes, Alexis… and his way to ignore thanking the fans for their support in Chelsea despite Özil asking for it!
Thankfully (at least for me) Özil doesn’t care too much about the social media/pundits and co or he could immediately stop his career…

Hard to check out of social media when you are hundreds, if not thousands of miles away from friends and family… Social media is sometimes the only way to stay in touch, view images, etc… Can’t blame players for being human. I think club clarity, either in or out, would be good so it no longer becomes a distraction.

Also they need to be on these social media platforms to raise their profile. These days it’s usually their media team that handles it but still it must be impossible to avoid when they’re constantly being trolled by a bunch of losers who have never achieved anything.

Yeah it must be fairly brutal. But I guess that’s part of it, that’s part of being a professional footballer at a club as big as Arsenal. Back in the 80’s/90’s the players would mainly get it in the neck from the tabloids and from the fans in the boozers. Now that doesn’t really happen anymore because the way football has moved on, obviously the tabloids are still there, but the younger players coming through 100% pay attention to social media more. And the players are now these huge global superstars constantly being marketed this way and that, so it… Read more »

100 percent agreed Vino. If they want a social media for their own uses, make it absolutely private to only friends and family, and tell them they’re blocked if they post or share any of that shit. If they want to banter they can use their own words. Have their PR agent put together a page, twitter, and instagram for them as the only official outlets, and never look at any comments. Tell them what you want posted, give ’em a few pics, and walk away. Moderate the fuck out of the negativity and block any repeating trolls. This is… Read more »

It’s clearly affecting the players and it won’t stop until the manager leaves. At what point does the clubs senior management decide these aren’t circumstances the players are going to thrive under and the only solution is to remove the manager?

Or at the very least end the speculations. I’m not saying everything will be good, but it’s gonna be a lot quieter around the club when it’s announced if Wenger stays or goes.
But we will know “very soon” as he said three weeks ago or something..

It won’t stop until Wenger’s gone, for too many we’ve gone past the point of no return

it’s not the only solution. Fans could get behind the team until the end of the season. Is there a suitable replacement manager available with 10 games to go? or is this a case of anything is better than Arsene?

I think you’ll find for many of the fan’s it’s been 13 years of patience and it’s anyone but Arsene.

This will not just blow away.

So the rest of the fans should just accept it? a little selfish that attitude if you ask me. As for 13 years… well 2 x billionaires turned up and we built and paid for a stadium… but you know this.

Absolutely, we the fans have paid for stadium so we could win the league and champions league so we’ll now push for a manager who can deliver those

I think you’ll find you have paid for match tickets and merchandise. Does buying you a cuddly Mickey Mouse toy give you the right to dictate how Disneyland is run?

Yes, all successful companies give their customers what they want

I don’t think that statement is factually true. 🙂 but lets agree to disagree. Up the Arse.

I think you’ll find that statement is factually true.
Arsenal not Arsene

Spouting nonsense (apologies all I shouldn’t bite) – If all successful companies give every customer what they want they wouldn’t be in business.

Apple (closed Eco system) Microsoft (change their licensing model regularly to the annoyance of the customer base), Airlines – charging for in flight food etc.

There is no need to make things up to support your opinion. It’s just silly.

Not sure if you are new round here LRM but unless you are also a completely brainwashed Wenger Outer (which you don’t appear to be) I wouldn’t waste my time on John C. He has nothing to contribute but his stubborn belief that Wenger going will make everything perfect as through magic. And it doesn’t matter if we win or lose, if we’re shit or brilliant, he never stops moaning.

There are people who respond rationally and those who respond emotionally. To this entire situation, John C may have become a tad bit emotional and can no longer see the past the red in his eyes due to the curly locks of Wenger’s hair. Ever so haunted by the tender touches of youthful summers long gone, he finds himself scorning his wistful longing, angry at his own weakness of heart. “If only, Arsenal could be like themselves again,” he lamented, but alas, how truly his sentiments are felt by all those who have felt heartbreak at the hands of the… Read more »

I am truly in awe!

Do you ban the fans making the negative noises? get rid of the manager? what if the replacement doesn’t work out immediately?

Those who want change need to wind their necks in and pick the right time and place. We have 10 games left (bar FA Cup) and need to get behind the team and the manager. Nothing is going to happen before the end of the season if at all.

My mistake – let’s all have a good dust up between ourselves tonight – shouting our opinions until we get our own way. 🙂

Very true my friend. I wish everyone could stay quiet about their views on the manager, good or bad and just support the team that’s on the field.. Save all the madness til the summer because rest assured that it’s going to be just that (as normal) whatever will be will be.. COME ON YOU GUNNERS

Performances on the pitch is what is wrong with this club at the moment.

There’s 30 points left this season and the players need to perform. Things could be a LOT worse.

Whether Wenger stays or goes doesn’t matter right now with 10 games to go. It’s a distraction.

Of course. Players will want to know their own futures. If Wenger says he is taking off now, the likes of Bellerin will be more than likely poached. Less so Ozil and Alexis will measure their decisions agianst the gaffer but some other players may. And that may leave any new manager with a headache this summer restrucutring the whole squad. Which will likely make it even more difficult to retain top 4 as a minimum standard next season or after (see United ‘transition or for the matter Liverpool over 25 years without the title). The same simpleton fans who… Read more »

Mustafi has been excellent this season.

Again another fantastic battling display from the German today both trying to move the ball forward quickly and cleaning up at the back. I love the way he attacks the ball early with aggression, instead of letting the opponents collect and turn at us.

Considering Koscielny had scores of reds, Own Goals and Penalties conceded in his first season with us, Mustafi has come straight in and settled very well.

Another great buy by the gaffer like Oh I dunno Alexis and Ozil maybe (or were those David Dein purchases?):D