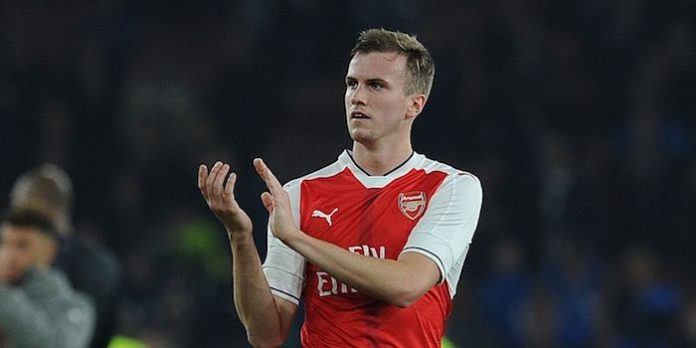 Rob Holding was quietly impressive in the FA Cup semi-final last weekend, and the 2-1 win over Boro the previous week which saw the Gunners shift to a back three for the first time.

Although he didn’t play in midweek against Leicester, the 21 year has caught the eye of his manager who reiterated his confidence in him as a player, but also spoke about his ability to learn from the games he’s playing.

We were in a situation where we decided to play him, you must have confidence in him,” he said.

“I believe he has a great future because he’s very intelligent and has a very objective analysis of his own performance.

“The biggest part in the improvement of a player is to be capable of analysing his performance in a very objective way, a little bit harsh, and I think he has that in him.

It remains to be seen if Holding will be involved on Sunday at White Hart Lane. The Gunners are sweating over a knee injury to Laurent Koscielny, but even if the captain misses out, Arsene Wenger says he can still play three at the back.

Win a copy of Mesut Ozil’s new book in this week’s Arsecast, listen below

By not playing three at the back, I feel Wenger has wasted all these years, so I’ll keep Holding on…..

I simply don’t understand at why people are seeing red at your comment!

Well, to say the years were wasted is quite harsh, and three at the back is not always a good setup. It is ideal to have the ability to play multiple systems, though, and Koscielny has shown that he does well in either system. Therefore, as Per logic’s dictates, the real problem has been the lack of a centerback who can effectively partner with him. I think it Mustafi been a source of great frustration to Wenger that none of the healthy CBs have stepped up in this regard. Also, apropos of nothing, I like Nachos. I like them so… Read more »

I’m Holding back the tears ?

I hope we’re not Holding back his peers.

Self analysis is important.. a bit hypocritical if you ask me.

Give the impression of being bright and his best years are ahead of him.

A young Tony Adams (but brighter)?

4 Sure new tony adam is holding

If he keeps up his performance and continues improving at this rate, I predict us having a world class defender and captain in 3 to 4 years time. The boy’s pure class; about the best discovery in this shambles of a season we are having

I\'m Professor Ignorance, on this subject
Reply to  Spanish Gooner

Mustafi’s still out. Gabriel, Holding, Monreal if we want to play back 3.

I’m really, really impressed with the lad. In fact, I think our CB position looks very good for the future in terms of personnel, they just need to be trained and drilled better. Koscielny is world class but not getting younger, however he still has at least a couple of years at the top. Mustafi is a good player, still reasonably young for a CB, he reminds me a lot of Kos when he came to us. If he can add a calmness to his game then he’ll really improve, his distribution is already top notch and he’s a good… Read more »

Not to forget Bielik who seems to doing well on loan

Holding, Chambers, Bielik all under 23yrs.
Mustafi, 25
Gabriel below 28.
We just may stick to 3 at the back to find ’em all playing time.

Holding looks a very good player what I have seen he just doesn’t have pace. He needs players with pace next to him but reading the game is great.

It’s a bit too soon to say but if he ends up nearly as good as Tony Adams we will have a great centre back.

We probably would’ve gotten Manolas and Higuain with David Dein.

Finding players like Holding, buying them cheap and giving them game time is what Wenger is all about.

some may say I’m mental but frankly I’d not object to seeing the BFG return between holding and Gabriel if Kos is not fit to return. He has enough experience to keep the other two right and they should have the pace to cover him when needed.
My memory of Per is that his distribution was always pretty solid. His height could be handy.

The BFG is already in the Arsenal captain’s retirement year, like Arteta before him, getting paid but not doing much.

Holding would have been far off better by now if Wenger had been playing him more regularly to build on his experience and confidence.