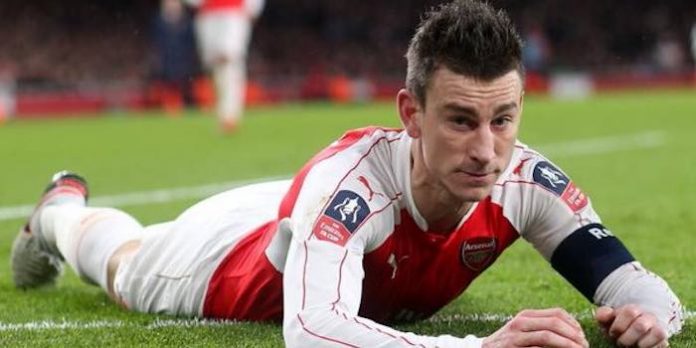 Arsene Wenger says that when Laurent Koscielny went off against Man City on Sunday, there was no real focus on who would take the captain’s armband.

The lack of an on-field captain was noticed by eagle-eyed fans, and the Arsenal manager, who often downplays the significance of the captaincy, was hard pressed to recall if a decision had been made.

Sounds like nobody was wearing the captain's armband after Kos went off. That doesn't necessarily mean we didn't have a captain. Hey ho.

“It is a good question. Nobody asked me who is captain. I will have 24 hours to think about that.”

Premier League rules state that a team must have a nominated captain, and although Arsenal appear to have broken that, there will be nothing more than a reminder to stay on top of situations like that in the future.

With Koscielny out of Wednesday night’s game with an Achilles problem that could be serious, Wenger will have to make his mind up as to who will wear the armband.

He spoke on Tuesday about Per Mertesacker, the club captain, but hinted his lack of competition might not see him involved.

Potential candidates to be captain tomorrow are Theo Walcott (who has done it this season), Nacho Monreal, Alexis Sanchez, Inanimate Carbon Rod and a dog that has run onto the pitch.

We haven’t had a captain since Vieira left in 2005!

Arteta was a good captain, just came to us a bit too late in his career and his legs ran out of leg-juice.

hello! Cesc was a good captain too

RVP was fuckin excellent, Blogs. Best we ever had since Vieira, for that one season.

True, and per is not bad also only if he played.

I tell you who would have been a great captain was old Bacary.

Loved the way he took the team by the scruff of the neck and got us back into the game that was slipping away against Spurs.

Massive respect for him.

I think Per was a great captain for us the season Arteta was injured. Such a shame he did his knee in pre season 🙁

Kwame Ampadu Down
Reply to  arseblog

Sorry but no he wasn’t. Being a good player & a good pro is not enough to make a good captain of a club the size of Arsenal.

Decent but not fantastic captain, shame we only got one good season out of him really. Should have bought him sooner.

The Don
Reply to  Zombie Gooner

OooohSantiCazorla
Reply to  The Don

What a player he was. One of my favourites

Gilberto Silva was one of the best captains post Viera

Imo Monreal is a safe bet. Not the loudest but leads by example, gets on with it, zero fuss (even when Gibbs was ahead of him). Now a very senior player and pretty consistent (a few blips this year but that’s true of the team as a whole).

His game is still littered with flaws though.

I’d give it to Alexis.

If we are going to lose him anyway, might as well benefit from his intense desire to just win.

I don’t care who’s feathers he ruffles, maybe some of the blokes in the squad need a right bollocking anyway.

I’d give it to Ramsey just for jokes. That would really get to the fans that use him as a scapegoat.

One of the best comments ever LOL!

Give it to COQ!

Does any of this really matter anymore? Let’s be honest with ourselves as fans for a moment. Every day something new gets trotted out and we jump all over it. One day they say that we need a major overhaul, the next we hear that everything is great and we just need little tweaks. One day we are told we should be challenging for the premier league and champions league and the next we are told that winning the top 4 is like a trophy and that we don’t really need the money from the champions league because the increased… Read more »

In rod we trust

My vote goes to the dog

Give it to one of the nutters, Xhaka or Mustafi. It will help focus them and make them minimally less likely to get carded as harshly.

Why is Per not playing again? Is he just a mascot or something

Curse of captain’s arm band. Collecting one season’s worth of cheques and likely released end of season. Strictly there as a senior voice…from on the bench.

I like the idea of Per extending his contract, but as a mascot. Gunnersaurus and the BFG would be just great.

I go for Ospina

who
Reply to  Nordin Bin Hassan

This just shows what a disjointed mess we are.

Does anybody remember a few years back against Reading when we drew 4-4 in the last minute & the players thought they had secured a replay and had to ask for their shirts back!

We really are a rudderless ship at the moment.

Give it to Alexis. He won’t be suffering from any curse of the captain’s armband anyway. And he seems the most motivated to get a win (after Mustafi). Let him give them the old hairdryer. But he’ll have to watch the deficiencies in his own game too. We don’t want to diminish the ‘chaotic’ aspect of his game in anyways but he had the most possession regained at 11 AND the most possession lost at 33. He’ll have to cut down the later and make more sensible choices particularly playing out of the back. Sometimes you have to trust the… Read more »

It seems like Wenger doesn’t really value the captain role within the team.
Hence, it wasn’t on his mind to appoint one to replace Kos on Sunday.
Also, in previous seasons he has played down the appointment of a new club captain by saying ‘it doesn’t matter too much who wears the armband because they are many captains on the pitch’.

Should just give it to the most motivated player who wants to win. Alexis.

Next to that Mustafi. He has flaws in his game but he also has a hunger to win.

An assist and a goal against City for a central defender is not a bad thing.

Mustafi? Really? He scores a goal so let’s give him the armband? The guy seems more concerned with yelling at his teammates for not doing their job (while the other team scores) and the referee than actually doing his job and that’s who we want as captain? To steal a line from Arsenal Fan TV “What is this nonsense blood fam blood”

I think yelling at players and putting pressure on the ref are key characteristics of a captain, actually.

Also, why didn’t Kos ask who he should pass the armband on to?
Or did he forget he was captaining the team?!!

In rod we trust

So absurd that I thought this was an April fool’s joke.

Alexis’s English probably isn’t good enough for the role seems like he’s improved a ton during his time in London, though.

Alexis, give him the armband and 250K weekly. He might stay. Cant believe we had no skipper v City. Cant believe Coq and Xhaka stayed on with early yellows. Must win v Hammers. Gabriel to KO Carroll.

In rod we trust.

in rod we trust!

Walcott as captain would prove Wenger’s theory that you don’t need one.

Theo Walcott deserve to be our captain.he is a senior player in the club and he has done it before.his contribution this season can not be underestimate.

Yes it can, he could have done better- see, I did it.

We don’t need a captain we haven’t haven’t had a manager for twelve months. Sick of his drivil. Nurse.

Girou may be captain if he starts

Interesting he’s always downplayed the captain thing. For such a student of the game I’m not sure he fails to realise that historically in England this has always been a huge factor.

In distant times when we were successful, Adams and Vieira were giants and leaders.

Theoptimist
Reply to  He\'s got no hair but we don\'t care...

I wonder if it comes from the idea of a great English leader taking troops bravely into battle… Nelson, Montgomery, Wellington, Churchill, Richard the Lionheart, even Thatcher was pretty good in the Fawklands.

Been a while since the French had one of those. Maybe it’s a Gallic thing.

I can’t think any experienced player in the team that can be a good captain on the pitch, all looks like a good guy that too scared to criticize his teammates when they underperformed. Mertesacker hardly playing nowadays, he is the 3rd back up for our CB. Kos looks like too focus in his own game and never give order to his teammate. Cech never shouting to our defense even when they were not displicine. Mustafi, maybe he can be a good captain, i see him made a small talk with other players in mid game despite in the wrong… Read more »

Go for the dog option. At least it will “show spirit” and “run around a bit”. Jaysis.

On a serious note, I’d prefer Nacho to Theo. And the BFG before anyone else, if he only had some game time this season…

Give the armband to Kreonke