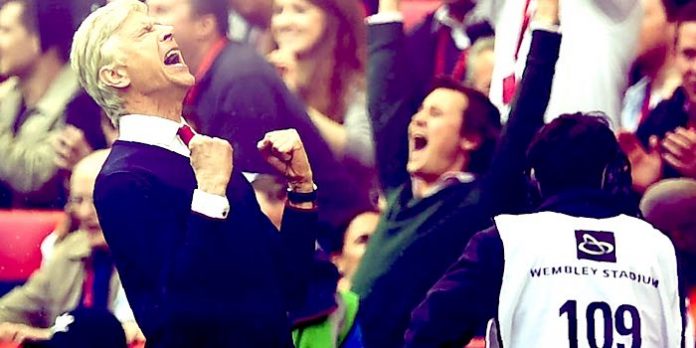 Arsene Wenger says his players are ‘united and determined’ after they reached their third FA Cup final in four years, beating Man City 2-1 at Wembley today.

The Gunners came from behind thanks to goals from Nacho Monreal and Alexis Sanchez, and the Arsenal manager was delighted to see a reaction after what has been a difficult period.

Although there was a 2-1 win over Boro on Monday, recent form has been sketchy, but Wenger was impressed with what he got from his charges today.

“I felt that we had a strong response today,” he said. |”We had a little bit of a cautious start, hesitant sometimes but we didn’t give chances away and we grew into the game.

“We played more in the second half and I felt as well it was a big test for us today – it was a mental test because many people questioned ‘Can we turn up in an occasion like that?’

“That’s why I am very proud for the players, because they showed they are united and determined.”

Let’s hope that this is something of a corner turned, because there’s no let-up – we face Leicester in the Premier League on Wednesday.

Amazing win. Revitalizing for me personally, doesn’t change the overall arc of my feelings towards Arsenal board but thank you to the team and Mr Wenger for bringing me back to life X

Oh Jambon, what a ham!

The Fallen shall Rise!

Well done Arsene. You did great yourself today. Was at the game and thoroughly enjoyed it. Thought we grew into it and were bossing it when they scored but we didn’t capitulate and kept going.

I still think he is no longer the man to take us forward but when you see pictures like this, it can’t help but bring a smile to your face. Despite everything this season, and despite everything that needs to be done, you can’t deny his love for the club

Top in November, one of the worst runs ever under Wenger and suddenly back playing as a team. What’s going on?

A bit childish to keep impersonating me.

But Birdy thumbed that up…ahaa I see….

Just admit you’re the same person and move on…..

I am not mate, if I was that would be worrying!

Great to see a professional performance. In extra time we looked a mature team capable of defending as long as necessary

This was a brilliant performance. We looked organised, determined, worked extremely hard and seemed to have a plan, all things that we have not done for months. Credit where it’s due. Well played!

But are you Original Paul, the one who likes Gibbs?

No, I am goodnight.

I agree. Also it was nice watching an Arsenal team which seemed to understand the plan and had the capacity to implement it.

(Apologies for the negativity), but if only it didn’t take Wenger so long to realise that his previous plan wasn’t working and that the team strategy needed to change, then we wouldn’t be struggling to sneak into fourth…

True, but today is not a day for recriminations. There are plenty of enough of those days.

What a great experience for John stones today. Got to sit pitch side and see his Idol Rob Holding first hand go about his business.

Yes. Yes. Yes. What a brave, skilful, gutsy win by our boys. Bring on the beers, then the pretenders. And Spurs lost. A for Arsenal.

I love what I saw. More of this Mr. Wenger

Fantastic result today why can’t we do it more consistently though , still we’ve had awful season the spuds are everyone’s favourite team in the media and we still got chance of silverware and they ain’t

That picture shows the look of a man who has had the weight of the world lifted off his shoulders and I’m really happy to see that. He deserves it and I hope the players have that same feeling. Nice win and we’ll done!

Got to say well done today boys, I’ve got to admit I’m probably worst critic on wenger and wanting him to leave which I still do,, but fair play played well today didn’t fall apart when city scored played with a bit of FIGHT just hope now we play like that till end of season and turn over scum spurs and utd

fuck this for a game of soldiers. I\'m off!

Well played Arsene but don’t go and an announce you’ve signed up for 2 more years just yet! Give us a cup, a champions league spot and a shiny new Alexis deal and you can hang about with our blessing.

Good to see the fans united and backing the team. No silly banners etc. As I mentioned before all the bile thrown at Wenger is childish. Chelsea were rubbish last season with the same set of players. Following defeat to us, they switched to a back 3 and have been transformed. I mentioned after Palace that Wenger would have to switch to a back 3. It was shaky last game bc naturally it takes a bit of getting use to. Some people of course begged to differ and said Wenger was clueless as per usual. This is a manager who… Read more »

Yes! Strong performance today! The new formation is encouraging.
We do have enough players who can play in CB to carry on in 352 next season.
Kos must hold gab per. Nacho can play there. Chambers is coming back.

Absolutely chuffed for Arsene! And Arsenal are in the final again… time to stop that lot doing the double after they stopped that other lot on Saturday… It’s still time to go for the manager but he has the chance to go out on a real high. Being ‘solid and dangerous’ is what’s required against Hazard et al but this new system he’s been forced to try out might just be the ticket

The boys showed their aggressiveness and desire to win it. For sure something has changed with the Gunners. They are now playing hard to win games. Let’s keep the momentum and aim at a top four finish as well as the FA cup. COYG !!!