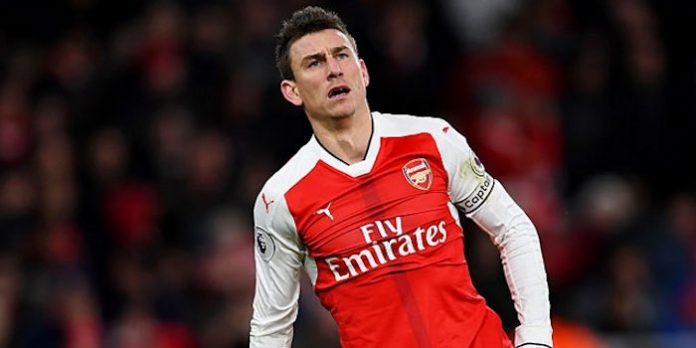 Arsene Wenger says he doesn’t know when Laurent Koscielny will be back in action after the French international went off at half-time in the 2-2 draw with Man City on Sunday.

The Arsenal captain is suffering from an Achilles problem, and speaking directly after the game, the manager was unclear as to how long he might be sidelined.

“I don’t know how long Koscielny will be out for,” he said. “He came off at half-time with an Achilles problem. How long will that last?

It’s a worry for the Gunners as the 31 year old has, at times, been the glue holding the defence together, but he has looked a shadow of himself in recent weeks.

Arsenal fans will also know well that Achilles problems can be very difficult to put right, with Santi Cazorla missing most of this season after aggravating a chronic problem he had been playing through.

Still, an actual injury wasn’t enough to stop Gary Neville being critical of Koscielny on Sky afterwards, questioning his character too, saying, “Koscielny always goes off. He’s a centre-back. He plays to half-time and then goes off.

“He might have a bit of a problem with his Achilles and I might be being very harsh, but he went off against Bayern Munich and went off in a big game today.”

He went off against Bayern Munich with an injury and couldn’t continue yesterday because of an injury.

It was only the third time in 41 games this season that he has been substituted. He has completed the full 90 minutes + stoppage time 37 times for club and country this campaign, and was also sent off against Bayern in March which prevented another full game.

So yeah, it’s pretty harsh to suggest he went off for any other reason than injury.

Steven Seagull and a scientific examination of Hector Bellerin’s pace among the Arsecast Extra highlights this week https://t.co/RvxbUXubPD pic.twitter.com/2ltvEHWw2y

Neville is an idiot. But with him out will it be Per and Gabriel on Wednesday?

I’m a big fan of Merts, but I think Gabriel and Mustafi did well.

Gabriel and Mustafi against Carroll is not ideal.

Typical gestation period for the lesser spotted Valencian Neville: About three months of embarrassed silence and then it’s back to making totally unfounded and inflammatory statements about things they know nothing about.

With Neville out I can see Per doing a decent job of punditry, but Gabriel’s poor grasp of Enclish may hold him back

Think it’s time for Per to come back in, it’s long overdue……

And Neville is paid for his comments? FFS.

Think the BFG should come into the side for a bit, him and Mustafi should be solid enough to see us through Koscielny’s absence.

Big blow to loose Kos for some time but we have to be able to use the squad!

Neville makes millions for making such comments. From all the pundits, I like Yorke. He said players have absolutely no excuses to not perform nowadays based on the means that are put at their disposal (training ground, equipment, nutrition etc…).

Neville would want to kiss Kos wouldn’t he

Fuck Didier Dechamps, I don’t understand why Koscienly played 90 minutes of both their games, including a pointless friendly when it was clear he was having injury problems and it was clear he is such an important player for his club. What a selfish twat, what’s the point in calling up 4 center backs when you’re only going to use 2!!!! At least in the friendly take him off in the 60th minute. Then we have Rambo, I watched the wales game just so I could see what Ramsey will do for his country. i spent the first 10 minutes… Read more »

Ramsey is always all over the place, it doesn’t matter what position he should be playing in. He is also far more interested in playing for Wales than he is for Arsenal, in fact he is the only player I know of who has his country ahead of his club on his twitter account. I would be really pleased if we sold him this summer because he’s either injured or straight back into the team being selfish and useless.

My point by the positioning is the front three was bale, Robson kanu and Ramsey. Ramsey defended as a defensive midfielder and attacked as a forward, to the point where most of the time he was the guy that pressured the goalie into picking the ball up. HE WAS ALL OVER THE PLACE LIKE IT WAS HIS LAST GAME.

a different George
Reply to  Gooooooooonnnnaaaaaaaa

I did not see this game but, like everyone else, I saw a lot of Wales in the Euros. Ramsey was all over the place and brilliant. It helped to have Bale occupying opposing defenders’ minds, of course, but Aaron looked like he did for us a couple of years ago: full of running, full of confidence, full of goals.

Threw your water bottle at the wall? Are you Wenger in disguise?

Haha the water bottle didn’t come bouncing back in my face so I’d say no!

Hmm, he’s 31 now and begging to pick up injuries quite regularly. Not a good sign. Likely that he’ll need to be played more sparingly in the future and as such the team will need to look qt alternatives. Given the state of the teams defending, the age of Mertrsacker and the unconvincing nature of both Gabriel and Mustafi, this is definitely an area that will need to be addressed in the summer. Having said that I haven’t much confidence in current manager, if he is still there in the summer, to address the heart of our defence and obvious… Read more »

What did they do to Gary Neville in Spain? He used to be quite a good pundit before he went out there, now he just talks shite!

I thought he was one of the best as well…….his abject failure in Spain has made him bitter……it didn’t sit right liking a scummer from Man U anyway so I am glad he is reverted to type

I may be being harsh, to use his own phrase, but Gary Neville should stick to talking tactics and not criticising players for injuries he knows nothing about. Perhaps he should consider results from his own position as a manager of a Spanish football team and be rather more circumspect in adverse comments. Is he just trying to get into a shite-talking competition with Chris Sutton on BT Sport to promote column inches?

Mertesacker on Wednesday or give Holding a chance to show a Championship-quality striker his experience in that league?

Neville is just whoring out clicks like the rest of those shills. I really wish we knew what kind of shape Mert was in – but it’s been sooo long since he’s started a match for us that I’m not comfortable with that level of rolling the dice there. The other concern is Mustafi was horrendous the last time he played on the left of CB. My inclination would be to start that as we finished. Gabriel’s probably the most physical CB we’ve got anyway, which we might well need the next 2 matches. One thing’s for damn sure, Mustafi’s… Read more »

@arseblog Is there an arsenal player who’s not been injured this season? I’m curious

The Jeff, AMN, Martinez, Holding. Probably because they never see any game time though.

This is a big issue. Having said that, thought Gabriel came on and did a decent job. We leaked both goals in first half with Koscielny on. Ospina I thought was fantastic. Still not convinced he is the best dealing with crosses against teams deploying more direct tactics. But against City, his reactions were key in saving us on several occassions. Its the tail end of the season now. We have 10 games to go in which IF we can garner maximum points, we can be at 81 points (potentially) We have to just gun for it. NO excuses. If… Read more »

Truth is he’s pretty unreliable these days. Time to ship him on and buy better.

Not sure who’s capable of that at Arsenal, at the moment.

Which is saying something given the general atmosphere at the moment.

Despite having Gabriel and, presumably, Mertesacker, part of me wants to see more of Holding and what we have with him. I think he’s looked an excellent prospect moving forward.

But, yes, too early perhaps. Bit worrying thinking about the central defence without Koscielny. Who knows, it might be the making of Mustafi.

Meanwhile, on Bein sport we have Liverpool legend Jim Beglin consistently bagging our players. Ozil is ”not the bravest” when he did not properly crunch Man City’s keeper late on. Then basically called him a coward and giggled like a little girl. Jim Beglin. Fuck me. Gary Neville would shit all over him. Should shave signed Winston Reid when we had the chance (four years ago) for our defence.