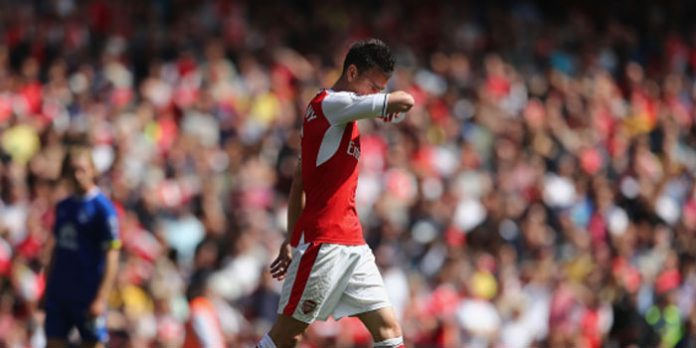 Hector Bellerin admits Arsenal will find it difficult without Laurent Koscielny in their defence when they take on Chelsea in next Saturday’s FA Cup final.

The France international will serve a three-match ban after receiving a straight red card from referee Michael Oliver for a reckless challenge on Everton’s Enner Valencia in the 14th minute of the Gunners 3-1 win over Everton on the final day of the Premier League season.

With Shkodran Mustafi missing the game due to illness and Gabriel stretchered off with a knee problem in the second half, the Gunners turned to captain Per Mertesacker who made his first appearance of the season.

Speaking after the win, Bellerin lamented the absence of Koscielny and Arsenal’s failure to secure Champions League football despite a strong run at the tail-end of the season.

“He’s a player who is very important to us and has worked hard throughout the year for us,” he told Arsenal.com.

“To miss him in the last game is going to be difficult.”

He added: “Since we changed to the new system, things have been working really well.

“It’s been a great run of form to build up the momentum and, even though it’s not got us Champions League football, at least we’re going to get to the FA Cup final with a great mood and environment in the dressing room. It was good to build up to it.”

Fuck it, let’s do what Watford did against City and play without any centre-backs. They may have conceded 5, but at least it’ll be banter.

Is Kosh out for 3 matches?!

So we start without him next year…

Disastrous start to the season even before it has started. We really have become a meme.

“Disastrous start to the season.”

There are bigger worries. The manager. Ozil. Alexis. Ox. Chesny. Wilshere. Who we gonna sign. You are overreacting for the wrong reasons. Never thought would say something like that though.

I love Kosch but I’m flabbergasted by his stupidity in making that tackle. What was the fucking point of channeling his inner Nelson Vivas man? Knob.

Kos has been strong for us all season long. I do not understand why people are calling him stupid, idiot etc… In the end, players are right when they choose their own interest over loyalty to a club. They only get loyalty from fans at instant t where they are being good.

Yep. Assholes all of them. It’s as if he’s tackled their granny and she’s dead.

When does Chambers come back from loan? He might be a useful option from the bench.

Such a shame. Oliver may have got it right, but only went on to show how incompetent and cowardly he is. A couple of crowd-appeasing bookings followed by numerous refusals to dish out that second yellow. He’s a mental midget, always has been.

No Cbacks? Rend my clothing asunder.

So we can’t play Mustafi back there because he is down with the plague.

Metersecker won’t do because he has turned into a statue clearly.

Holding used his hands so they shalt be cut in twain.

Monreal will be useless for sooth.

Crisis. What crisis. Woe be us.:D