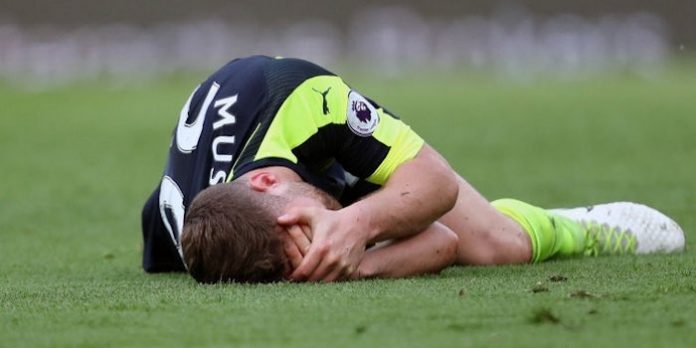 Arsenal will be without Laurent Koscielny for the FA Cup final after the French international was sent off in the 14th minute of yesterday’s 3-1 win over Everton.

It also seems likely we’ll be without Gabriel, who had to be stretchered off in the second half with what appeared to be a serious knee injury.

Losing two centre-halves in one game is bad, but now it has emerged that Shkodran Mustaf is a major doubt for the Wembley showdown with champions Chelsea.

The news comes via the BBC’s David Ornstein:

The German international suffered a concussion after a clash of heads during the 2-0 win over Sunderland last week, and was unable to play yesterday because of illness related to that.

It obviously remains to be seen how he recovers this week, although as yet there are no mandatory periods of rest in football for head-injuries and concussions.

However, there are strict guidelines that have to be adhered to as we saw earlier in the season when Hector Bellerin was knocked unconscious by Marcos Alonso at Stamford Bridge.

You can see details of the GRTP (Graduated Return To Play) process here. Let’s hope he recovers properly and makes the game.

Do we get Chambers back now the premiere league is over?

Sadly not. He is contract bound till May 31st with Boro. 🙁

Also cup-tied too. Forgot about that.

great question! How come you can only do an emergency recall for goalkeepers and not all players when on loan?

Holding, Mertesacker, Monreal with Bellerin & Gibbs on the wing…what could go wrong?!

That’s just about all we can get on the park. Though I’d prefer the Ox on the left if possible

OX should play on the left to counter the pace of Moses which may push him back. He needs to play the FA Cup final and if he misses out this time, it may hamper his chances to sign a new deal. Though I dont think Wenger will use him from the start.

I’m not massively concerned, mert is a reader, holding can do the bosses job…Well.
As long as they stay injury free – I’m happy.
We’ve hit good form at the same time as theirs has worsened..the hoodoo is done…. I think we’ve a good chance of doing it.

Well, shit. At least we have our excuses ready.

Really hoping Mustafi recovers. Incidentally, excellent after-last-game-of-the-Prem main article, and the By The Numbers piece is excellent as well.

BFG, Holding and Monreal can do the job. We are going to win.

Gibbs at LWB, the game could decide his future at this club which seems to be slim as of now.

Don’t worry guys, we can have Holding, Mert and Monreal as the back 3!

Nacho, Per, Rob then!

We are good enough!

Anyone gives any thought of having wishere as a left wing back next season?

left back in the changing room?

If its not raining, its pooring at Arsenal. Geez.
Holding, BFG, Monreal at the back then? Which sucks cause the team is better with Nacho nacho man playing further up!

Is Callum Chambers an option now he’s finished at Middlesbrough?

Have a feeling that Mustafi will pull through. He’s a warrior!

10 days should be plenty to recover from a concussion. The FA have just become super cautious regarding head injuries

Brain injuries don’t work like that. It’s quite worrying that he’s not already recovered.

I\'m Professor Ignorance, on that subject
Reply to  JDizzle

I see a lot of concussion injuries watching the Browns play in the NFL (aka American football). Concussions are unpredictable injuries for which time and patience are the only real options. The same player might come back in a week with no problem from one concussion, then be out for a couple months on another occasion. The general rule is that the more concussions a guy has, the harder it gets for them to recover from them, and research (IIRC) seems to show that even a single concussion inflicts permanent brain damage, so it builds up over time if you… Read more »

Oh the joys of being an arsenal fan. It’s only Chelsea that we’re playing, it’s not like they’ve made any waves this season!

I think the footballing God’s are making us as feel as low as a snakes belly, so when we win it will be even more glorious.
Keep the faith gooners, football’s a funny old game.
COYG!!

Well, they seem to be laughing at us.

So we get to suffer a week longer than anyone else. Great.

So we finish the season woefully short at the back – the way we started it.

A fitting metaphor for a club that seems to be going in circles.

I rather see Holding – Mertesacker – Bellerin at back three. Monreal is better wingback than Gibbs and on the right side can play Ox or Theo who was defending quite well in the first half of the season. Or we can give chance to the man the myth the legend Caaaaaarl Jenksinon!

I agree with on Bellerin to join the back 3 and the Ox to play wing back. I’m hoping for Wenger to throw Perez in, Welback, Theo and Giroud have been wasteful of lately. Perez can be the game changer for us come Saturday. We need a striker who will take all the chances that he will be given come saturday.

Aren’t you worried how will Perez perform? He didn’t play a single match in months.

Who do we bring on the replace one of the back 3 if they get injured on the day? I genuinely have no idea.

I wonder if Beilik is back and available to us.

At what point of the match did Mustafi get this head injury against Sunderland? He didn’t come off, which raises some pretty serious question in itself.

You are the king of serious questions.

Why don’t we just switch back to a Back 4? Bellerin-Holding-Monreal-Gibbs. Don’t trust Mert to go a full 90 coming back from such a long layoff.

Holding, Per, Monreal?
Hmm, we have no chance with this trio against Chelsea.
Looks like it’s gonna be easy win for Chelsea.

If He had concussion he should not play, not worth the risk