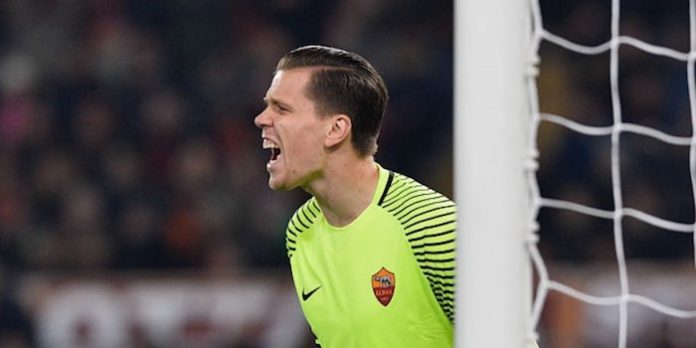 Wojciech Szczesny is a summer target for Napoli, according to regional publication Il Mattino.

The Poland international, who is currently on loan for a second successive season with AS Roma, has earned plaudits for his performances in Serie A this season where he leads the clean sheet charts with 14. It’s thought the 27-year-old is open to signing a permanent deal with the Giallorossi should they wish to trigger a clause inserted in his loan agreement this summer.

Szczesny remains under contract at the Emirates until 30 June 2018 although he hasn’t played a game in Arsenal colours since the 2015 FA Cup final.

It seems hard to believe that he’ll be brought back into the Gunners fold following the furore over his smoking antics, however, with doubts over the future of David Ospina and Petr Cech not getting any younger it wouldn’t be the worst decision. Back in January, 59% of Arseblog News readers backed him to revive his Arsenal career.

In the meantime, with Roma and Arsenal in no rush to make a decision, it looks as though Napoli are keeping tabs on the Pole’s situation and are also monitoring Juventus’ keeper Neto.

He got a lot of stick and some fans lost faith in him before his loan, interestingly he has actually improved since leaving us!!
I hope he comes home next season and grows into that special number 1 we’ve been missing for some time.

I love how one article on his dodgy distribution, in my opinion as much to do with his options up field as anything, and a few months having little or no protection from a very dodgy defense and suddenly Cech is surplus to requirements. By all means bring back Wojciech “smokin” Szcz but we’ve got a world class goalie already on our books. Two months does not a useless goalkeeper make…

Cech was amazing over the weekend, but let’s keep objective about this thing. Arsenal fans have a tendency to just ignore facts and just swing according to whatever happened in the most recent game. Cech was good, great even, but let’s not swing back to “he’s world class” based on a few games. The conclusion about his status being WC is questionable over 2 seasons, not just 1 game. In that regards, Sir Chez has been one of the standout keepers in Italy for 2 years. Dude is on loan and is still benching Allison, a bonafide top keeper and… Read more »

Allison, I know the Wojc is killing you

have to say , now that cech has become a mainstay as our no1 goalkeeper he has not proved to be the THE GUY that would improve our defense as was said before his move to arsenal . i’m not blaming him , he’s a wordclass goalkeeper but it just proves that our teams problems lies far deeper that lack of worldclass players . wenger is essentially playing fifa here , throw in a worldclass player and the team would be better. we bought a worldcup winning defender , and a top keeper , hell we even played three at… Read more »

It can’t be a coincidence that many of our keepers seemingly have issues with distribution over the years, along with Chez.
And seemingly his time at Roma has improved his distribution. He even made a veiled comment about he’s been appreciating getting specific coaching about particular situations that he obviously wasn’t getting before.

Considering he’s been with us since the age of 15, “before” can only be in reference to us.

Although I would like to see him replace Cech, it should be noted that he hasn’t become error free just because he left Arsenal. The stats will tell you he hasn’t made an error that has directly led to a goal, but that’s only because he got lucky here (see first 20 secs or so):

Same could be done for De Gea, Cortois, lloris, etc.
His praise isn’t over moments, but over 2 seasons. The Roma fans would love to keep him, and as stated, he’s benched a certified top keeper.

The goalkeeping coaching has been a big issue for a while. Remember Fabianski who refused to train with Gerry Peyton and took the highly respected Tony Roberts with him so Swansea. But as always, Wenger’s too loyal.

agreed . at this point there should be no doubt that there is something really wrong with our coaching system . we take good players and make them look like a utter waste . bellerin , giroud , ramsey , mustafi , cech so many players regressed after coming to arsenal

Bellerin has been with us since he was 16, it’s not like he was Beckenbauer when he arrived and we ruined him…

Imagine him giving a earful to Gabriel and Mustafi everytime they misplace a pass… Jens 2.0 .We need characters like him who actually give a fuck about winning. That loan spell surely did him some good.

Yes, his departure is somehing that has to be re-evaluated. After all that transpired this season, the reported bust ups, maybe we do need a lot more spikiness.

Reina is a twat

Almost 7 years and I’ve still not been able to shake the image of that attention seeking nob with the Spain national team (who barely even got a game for them) shoving the Barca shirt over Cesc. Grade A twat.

Great age, best years ahead of him. Best keeper in Italy this season.
If he were a transfer target we’d all be frothing at the bit.
Get him back and tell him to bring an Italian manager with him

Could kidnap Bonucci from Juventus while he’s at it.

I KEEP MY TABS IN THE FREEZER

Szczeny must be really high by now with all those tabs on him.

NOT AS HIGH AS MY FRREEEEZZZER M8

I’ve got an auto-play advert popping up at the bottom of the screen on this page, which keeps on making the screen scroll to the bottom of the page. I’m assuming you guys weren’t aware of it, so I’m pointing it out. I’ve had to turn my ad-blocker back on, which I turned off on the request of blogs from a couple of months ago.

Well that’s strange because I never get pop ups here.

Did the ad promise hours of endurance and stamina?

Nope, I think it was for Adidas – had Anthony Joshua doing something or other.

My ad blocker is turned off for this site domain and I haven’t experienced such issues.

(Have u tried restarting your computer? Lol I kid, I’m no IT expert)

No video now. Just an ad for making investments for your retirement. I’m not that bloody old!

Is it a problem when accessing other sites too? Because then it could be an addware/spyware/malware perhaps from some recent program that was installed?

dunno – have Ad-Block Plus on, so don’t get pop ups/auto-play vids anywhere else.

Never had advert pop ups, but does anyone know how to turn off that ‘more stories’ pop up?

He’s done really well which is great to see. But it just begs the question of why didn’t we just sell him if we don’t ultimately want him back rather than just loaning him out repeatedly until his contract expires.

What’s crazy to me is for a club that supposedly prides itself on being astute financially, Wenger and the club often are anything but. We don’t protect our assets and allow their contracts to run down until we get to the point where have no negotiating power. We don’t sell players he doesn’t fancy – instead just loaning them out (even if we get a loan fee what’s the point – just sell them so you don’t have to waste time dealing with it). By not just paying what the players cost if we want to buy them as up… Read more »

We hang on far too long and extend contracts that shouldn’t be extended. We held on way too long to Arteta, Rsicky, diaby, Wilshere and now Mertesacker and possibly Santi. They’re all on relatively high wages. Remember when we couldn’t move Bentdtner or Almunia because of that? Now it’s Debuchy and Jenkinson. We’re anything but prudent.

It’s the egalitarian wage structure. The lesser players should be getting much less than they do. They’re easily replaceable, so if they want higher wages they can fuck off to someone else willing to pay them.

i cant see shez coming back unless he is going to be no1 why would you come back as an under study to cech,he can now command a no1 spot where ever he goes, i like him would have him back tomorrow he has the mentality of lehman and i think he is Arsenal through and through, still a lot can ride on it dependant on Wengers stance

I think we’re making an assumption that he’s returning to be an understudy. If you look at it objectively, it’s essentially Serie A’s best goalkeeper (if he wins the golden gloves, which looks likely) vs a 34 keeper in his twilight, and overall you couldn’t claim is in even in the top 3 keepers of this league. If you look at it subjectively, we kept him on loan rather than sell and also ensured he still has the no.1 shirt. One most only conclude that the intention was for him to come back. But if that were the case, why… Read more »

I would happily have Szczesny back as number one in the summer and sign him up to a new deal. We should also buy Jordan Pickford & he can compete for the number 1 jersey or at worst be the cup keeper. We will be in the Europa League next year and that is a minimum of eight games (including play off for the league stage if I’m right). Further progression in that competition could lead to another 10 games plus FA Cup & Capital One. In short, we could potentially have a lot of games next year. I don’t… Read more »

Yeah Szcesny maybe able to keep clean sheets but it helps if you have good defenders in front of you and coaching staff.

By all means bring him back but until thinks change at Arsenal like decent defenders and staff he won’t be as good as he is at Roma.

Check is a good keeper as a second but we need some new young blood. This is all over the pitch though not just in goal.

Proof that it’s more the environment than the player.