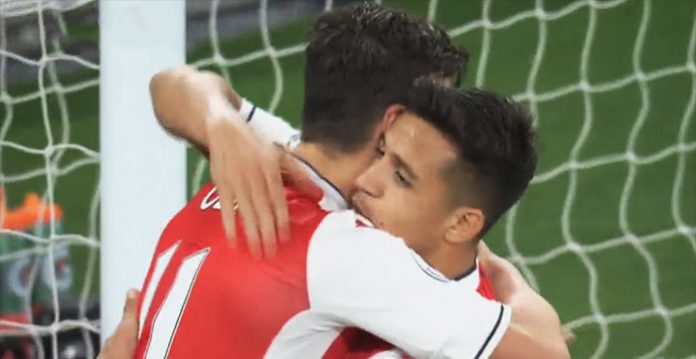 Arsene Wenger says that Arsenal finishing outside of the top four will not make the job of convincing Alexis Sanchez and Mesut Ozil to stay any more difficult, as the players themselves will have to take some responsibility for that fact.

The Gunners require Liverpool or Man City to drop points on the final day, as well as picking up the maximum from the game with Everton, if they are to have Champions League football next season.

If that doesn’t happen, it’ll be the Europa League – a competition which certainly lacks the same lustre. However, the Arsenal manager insisted it wouldn’t make life more difficult with the two star players.

Asked if it might complicate matters, he said, “No, because they are part of the results as well. Like I am.

“They don’t behave like players who are disinterested in the future of the club.”

And on whether or not their contributions to the recent run of wins is a sign of their commitment, the manager was positive again, but did hint at something else.

“Maybe one day I will be able to speak about that, but I don’t question, at the moment, their focus and their determination because every game they turn up and give strong performances.”

We need two more big games from them, on Sunday of course, but then next Saturday at Wembley where we can win our third FA Cup in four years, and stop Chelsea doing the double.

For more on keeping Alexis and Ozil, listen to today’s Arsecast with discussion of that and much more

This means they are both leaving either way then. Bye bye Sanchez and Ozil.

Pookins
Reply to  Wright on the money

What would he have needed to say in order for him to “mean” they are both staying?

That they are staying

I’m not one for gossip but this behind the scenes issue Arsene has referenced twice (possibly more) now has me chomping at the bit.

It wasn’t just one player, entire team performances suffered during that period. Even a shred of insight could be incredibly enlightening or eye-opening.

The man sure knows how to tease with those cards practically superglued to his chest.

It’s the ideal bluff. He never has to substantiate his inference that he did something great.

It’s a team sport, win together, lose together.

That’s not to say Sanchez hasn’t contributed in a positive way, but he along with everyone else associated with the results are accountable for the results.

I’m expecting the announcement of a new contract for Wenger, closely followed by new contracts for Sanchez & Ozil, closely followed by a sizeable war chest:: They ain’t stupid these chaps. Wenger knows he can’t just sign a contract then lose our 2 best players and he wants to sign a new contract: I’m not a Wenger in or a Wenger out guy, I’m an Arsenal fan and I want Arsenal to win .. I think we’ve proved that we can win in these last few weeks, the mentality and confidence of the players is so brittle under Wenger but… Read more »

Dude, love your optimism! Wish I could get there.

That all sounds nice, but we’ve been on repeat for years. Time for change.

They aint stupid you say but if they do what you say as in sign up Ozil and Sanchez,provide a war chest and give Wenger another contract that will be really obviously stupid. I think we all might just see through that one and nothing will improve on the pitch if he’s still manager next season.

Arsene and his ‘maybe one day’… jeez

That will be the title.

Keep these two, Ox and Wojciech, sell Ospina, Ramsey and Walcott, secure Sead as wingback and bring in Isco and Mbappe or Griezmann. Easy (and then I woke up)

We don’t need Isco, who’s too offensive; we need someone genuinely top class (all our current guys are ok, but with significant weaknesses) who can partner Xhaka in a deep-lying/box-to-box midfield role. Other than that, I think you’re spot on.

We need to clone Cazorla or find a guy who can ve moulded in to him. So important to our style of play under Wenger.

Ja maybe, I was thinking abut the article a few weeks back about how we are actually lacking technical players in the middle (I think Tim Stillman). Problem is I can’t actually think of anyone for the box to box/deep lying role. Any suggestions?

This man sounds like a third world politician every time i listen to him.

We should be so lucky, any politician talking like him would be an upgrade, big fail on that comment

I want Mbappe or Griezmann at this football club.

If it’s Griezmann i would put Ozil on the left and Griezmann on the right.

Pathetic. They aren’t as committed as me. Criticise them. Just go but no two more years of the same old same old. Within 10 games next season it’ll be toxic

At this point, I’ve just accepted that both of them will go.

I think the top 3 should qualify automatically for the Champs League. Then the winner of the FA Cup should go into CL qualifying stage. So in our case this year we would have qualified (for the CL qualifying) already by virtue of the West London cunts winning the league and already being in the CL proper. Proper hate that expression, but you know what I mean. Anywho that’s not happened and ‘if’ it did get implemented next season I’m sure we’d probably finish 4th and get knocked out at the semi-final stage of the FA cup and I’ll curse… Read more »

Europa league is like the Carling Cup of Europe. Moanrinho will trumpet winning the league cup but in truth it is a rubbish competition unlike the FA cup. Ditto the Europa. IMO we should definitely play it but we should not make it at expense of the league title which SHOULD be the main prize and goal next season. The press won’t say it but BOTH Chelsea and Leicester before benefited from NOT being in Europe. IF we even get to keep both or one of Ozil or Alexis, we need to first and foremost prioritise the league title next… Read more »

To me, we have to be planning to cut our cloth accordingly as if we are in europa and not CL. We need to sign players that will see us as a step up but also can bring the qualities we need. Someone like Babayoko at Monaco is perfectly getable for say 20-25m Also Konoplyanka (regardless of whether Ozil leaves or stays for 27-33m . He’s a fantastic playmaker with excellent dribbling abilities and some pace and at 27yrs is fully experienced. On loan at Schalke from Sevilla at the moment, should be punching higher and certainly wasted if he… Read more »

Still remember not too very long ago when many fans said we should forget about the Top 4 trophy and would gladly exchange it for a shot at a trophy like the FA cup (or worse League cup) How times have changed.:D Proves to you most people are shallow thinkers at best. IF we win FA cup would you exchange it for Spurt’s second Best trophy? Granted we all want the title…but would you rather we won second best for 5 seasons or FA cup? Lets remember as well neither Chelsea nor Leicester the season before were encumbered by Europe.… Read more »

Harsh, but fair – they both have played a part in our season. Hope they stay and propel us upward.

I believe it will help boost our playing time in league