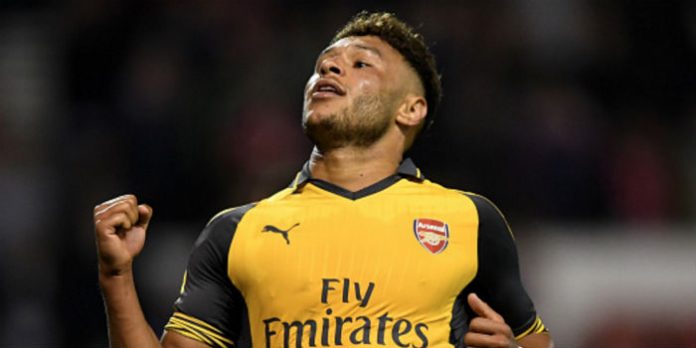 Having picked up a hamstring strain at Southampton last week, Alex Oxlade-Chamberlain has been given positive odds by Arsene Wenger when it comes to making the FA Cup final on May 27th.

The 23 year old has been ruled out of the final two Premier League games of the season, and the Arsenal manager says the earliest he’ll be back is for the Wembley showdown with Chelsea.

However, it seems he has a better than 50-50 chance of making the game, which will be a relief after he missed out in 2014 after sustaining a similar kind of injury in the weeks before the final.

Hector Bellerin came back into the side and provided an assist for Olivier Giroud to score the opener, and there’s no room for sentiment when it comes to picking a team for a final.

There’s more immediate good news ahead of tomorrow night with Alexis Sanchez taking a full part in training today after Wenger said he was set for a fitness test.

The Chilean could still sit this one out from the start, with the Frenchman set to make a number of changes after what has been a hectic, testing schedule.

Check out today’s Arsecast Extra, laughing at Stoke and much more

No room for sentiment? Tell that to Lucasz Fabianski!

Am praying for the Ox to be fit that day..so far he is the best right wing back we have

This might be the toughest selection decision for the final. This or Giroud vs Welbeck.

Would personally go with Bellerin and Welbeck. Chelsea don’t have the aerial prowess (at least size wise) that they used to have, and i’m anticipating them having a fair bit of the ball, so Welbeck on the break i think would be pretty handy. Luiz doesn’t usually fair well against pace either. And simply Bellerin is still a better defender than Ox. The target for this game has to be to not ship more than a goal, i can’t see us putting three or four past them.

I can see it both ways. Our outlets might be the wing backs and Giroud’s done a pretty good job of reminding us in the last couple of games that he knows how to put a cross away. Had Ox not got injured and continued in the form he was showing, I would have kept him in, but it would be risky to bring him back from injury for the final, especially if Bellerin is also playing well. I think that one might have to go to the man in possession.

Yeah I agree it’s not cut and dry, just personally think we’ve looked strong with Welbeck playing for the past month or so. That said can see the argument for both sides. I just think that, above all, Ox’s injury record makes him a big risk for the game. Losing one of our three subs early doors because he’s tweaked his hamstring when we could have played a very, very good wingback instead would be infuriating.

With you on Ox – sad for him though.

Might not see him in an Arsenal shirt again. Sad times.

Have you information that he is leaving ?

So his odds of playing are the same as Chelsea’s odds of winning the trophy.

It’s the opposite, though, isn’t it. I mean, let’s be honest here.

None of Chelsea’s players, apart from post-2008-ACL Michael Essien, would get into this Arsenal side.

Hazard? Kante? Christ, they’ve had Fabregas warming the bench all season (who has more assists than anyone bar Alexis!)

Don’t kid yourself, they are champions for a reason.

Outside of hazard, fabragas, kante, matic, courtois and maybe… willian. Oh and Diego costa despite my hate is having a pretty decent season. I dislike most of those players but…

10% of the population are not able to detect sarcasm. Looks like Hector and Bill are in that 10%. That or they are just easily triggered….like a furniture moving fruit tile.

“…with the Frenchman set to make a number of changes after what has been a hectic, testing schedule.”

Pffft. They just had three months off.

London derby and a cup final…form goes out the window.

I’d play him as an inverted wing back on the left so we can balance out on the right with Bellerin.

The Ox as a left wing back? Defending is not his strength and now he must defend on his weaker foot.

Nope. Nacho is having a great period at both LWB and CB at the moment.

I’d also play Giroud. He is more efficient than Welbeck attacking the 6yard box. If Bellerin and Alexis on right and Ox and Ozil (and Monreal if he plays left side of back 3 allowing Ozil to join centrally a bit) on the left can put pressure and go down the flanks, they can deliver service into Giroud to apply the finish.

Gooner, ever heard of punctuation? Stuff like commas, full stops?…..

Has anyone mentioned that John Terry is a cunt?