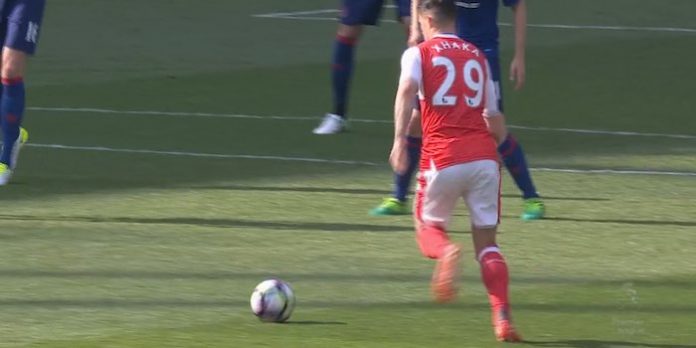 Even with the outrageous red card he was issued against Swansea, the Swiss international is sanguine about suggestions officials pay closer attention to him than others.

Speaking the wake of the 2-0 win over Man Utd on Sunday, he said, “I don’t know if that’s really the case, I don’t think so.”

And when asked to assess his first season at Arsenal, said that was not for him to decide.

“I’m not really a fan of talking about myself too much,” he said, “maybe others should judge. It’s a season that has had ups and downs, but that’s normal in your first season. I think that belongs to football.

“It’s not like I played my first football match in England. For me football is pretty much the same everywhere, the ball is round, but maybe tactically things are different than at other clubs I’ve played for.”

As for the chances of making the top four and securing Champions League football next season, he admitted Arsenal need a bit of luck along the way.

“We always have hope,” he said. “It’s up to us, we need some luck along the way, but if we win the next four games, I’m convinced that we can do it.

“This is a top club, a great club. We’re having a season where things have been a bit more difficult but I’m convinced that in the coming years we can show another side.”

The 24 year old continued by saying the cards he’s been issued have made him smarter, but that he won’t change the way he plays.

“In football you get criticised if you are sent off,” he said.

“It’s my style of play and nobody can make me change that. Even if I get another red card, then that happens.

“You become cleverer, and since my last red card, I think things have improved.”

Since his last sending off he’s had eight bookings in fifteen games, but that’s a whole lot of yellow and no red.

Granit mate – just let one fly whenever you feel like it, from any sort of range. Nothing better than watching a player absolutely steam one in top bins from any sort of distance. Cracking goal on the weekend. I think he is a class player, we just need to figure out who’s going to go along side him. Still not convinced by either Ramsey or Coquelin in the long run. We really need to look to bring in another player like Santi to help collect the ball off the centre-halves and then distribute it forward. Because we cant keep… Read more »

Agree with first reply. Although Ramsey does look promising in this formation (as AW said, it suits him).

So happy he’s an Arsenal player

On yesterday’s evidence, the Ramxhakal midfield has potential.

That oddly looks too close to ‘ramshackle’…

This time it deflected off Herrera’s back.Next time smash either Jose or Herrera or hell, even better, smash that Dabbing machine’s face with that left foot of yours,Granit!;)

Another great buy from Wenger. Granit’s range of passing for us is so critical. I thought he was a close second for MOTM next to Ramsey. In all honesty the whole midfield was decent yesterday and that included Ozil who was effective almost in a deeper role freeing up Ramsey to push ahead. Also Coquelin was excellent when he came on. I think as I mentioned before he will proper with the back 3 (Great flying starfish block!) Mustafi will have some work to do working his way back into the team with Holding (one mistake aside) being generally excellent… Read more »

Love him but I disagree. I do feel his 2 reds were extremely soft and were given just because of his reputation. This weekend in the Bournemouth stoke game Harry arter made a terrible over the top challenge on Joe Allen and just got a yellow even though it was a red all day everyday. I felt then the reds he got were harsh and feel the same now but as someone said he does make his tackles look more worse than they are which results in him being carded. Love him nonetheless

Good man, Xhaka, for that smart answer. Even if he thought he’s being unfairly judged, complaining about wouldn’t make it better.

Agreed. He gave the right answer. Complaining about it to the media wouldn’t have helped but could have made it worse rather. Has shown great composure by answering the way he did

This boy seems like a smart player and will learn from his mistakes and I expect him to start justifying the heavy price tag the club paid for him next season.
I do feel though that the ridiculous media have ganged up on him and lazily have labeled him as a reckless player and it unfortunately has an effect on the referees in England as they are falling for the media BS.
Xhaka is far from a dirty player and hopefully the Prem refs will figure that out next season.

Can\'t Think Of A Clever Name

Grantit Xhaka in the first line, Blogs. In other news, finally got myself a name thanks to you!

Not only the referees. I want to punch the pundits with their stupid comments on him. It seems like the media there have succesfully created a reckless brainless image of him while leaving many other terrible players on the league unpunished.

When other player makes a bad tackle, “he just wants it more. Sometimes you can’t see the other player on such an intense game”

When Xhaka makes a good tackle,
“He is lucky the referee didn’t see him going in like that. One bad move and he could injure the player”

Come on, this is football not a drama!!

Ofcourse the balls are always round. Oh wait..

What a singularly beautiful man