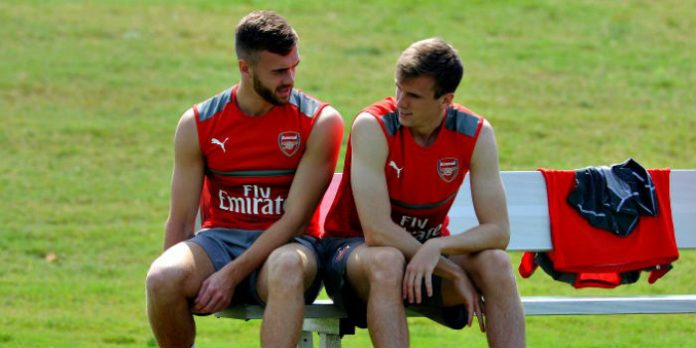 Rob Holding and Calum Chambers have been called-up to England’s under-21 squad for this summer’s European Championships in Poland.

The duo, who started alongside each other for Arsenal in the opening day 4-3 defeat to Liverpool, have been regulars for the Young Lions during the qualification process.

Aidy Boothroyd’s 23-man squad will assemble at St George’s Park between 7-10 June before travelling to Poland to face Sweden, Slovakia and the hosts in Group A. We’re still waiting to find out but there’s a chance that Krystian Bielik could feature for the latter.

Spain’s Hector Bellerin is the only other Arsenal player at the tournament.

Good lads, would be fantastic to see a partnership growing at Arsenal and for England.

Holding looks stronger than Chambers currently but let’s see, hope they make it together.

If we keep the 3-5-2 formation, I suspect Holding will be first choice (for the first couple of games anyway with Koscielny suspended) and Calum Chambers can then be back-up for both RB & CB.

Whatever happens, there will at least be 2 defenders unhappy with their playing time next season if we keep all of the current lot.

I didn’t mean Chambers & Holding, but the fact that we’ll have to choose 3 CB from Mertesacker, Koscielny, Holding, Mustafi, and Gabriel.

With Mertesacker himself admitting he can’t play every game any more, Koscielny managing a chronic Achilles problem, and the possibility of injury to any one of those 5, there should be plenty of game time to go around for everyone.

I’m pretty sure Kos wouldn’t be unhappy to be left out of the team on a cold Thursday night in Russia!!

Sooooooo our defence is well sorted. Nice, now to the midfield and attack…not many changes required imo. COYG!

Sounds like a good plan. And ox can be the 1st choice cm alongside xhaka.

The Future of Arsenal

I hope they see the post and the thumbs up – I do think they would be told of a nice post like this by their friends and family?

Bielik was called to Poland U-21 squad.
https://www.pzpn.pl/reprezentacje/reprezentacje-mlodziezowe/reprezentacja-u-21/aktualnosci/2017-06-02/powolania-do-reprezentacji-polski-na-uefa-euro-u21
Official site of the federation, english version of the site is not updated often so info only in Polish, but You can see him in the squad on the graphics.

Would love to see Chambers back in the fold.

I think Wenger has been using him as another project trying to switch him to a Cback.

But we have Holding courtesy of David Dein.

IMO he should revert him to Rback, the role he impressed for with Soton.