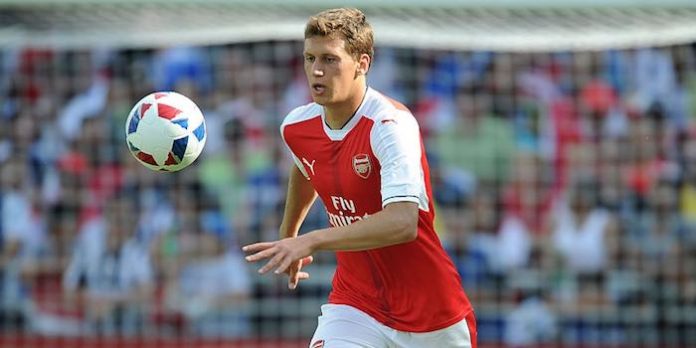 Krystian Bielik’s form for Birmingham City at the tail end of the Championship season has earned him a debut call-up to the Poland under-21 squad for the European Championships in his home country.

The 18-year-old defender now has the chance to face teammates Rob Holding and Calum Chambers in Group A with Poland taking on England, Slovenia and Slovakia.

Should Bielik play for Poland he’ll join the lengthening list of players likely to miss Arsenal’s pre-season tour of Australia and China.

Last week he mentioned in an interview that should he get the nod from his country he’d probably not return to training until 13 July, the day the Gunners play Sydney FC.

Back three of Holding, Chambers and Bielik in 3 year’s time?

I was just about to post something similar. Would be thrilled to see him graduate to first team next year and play a few matches. On a broader note, when Chambers returns, we’ll have Bellerin, Mustafi, Kos, Monreal, Chambers, Holding, Kolasinac, Bielik, and Gabriel. Maybe also Mert and Jenks? That’s a number of players — what is the armchair manager consensus on who should depart and where do we need better? My thought is: Jenks and Gabriel out. I like Gabriel, but he seems to make critical mistakes. Try to keep Mert around for one more year. But would this… Read more »

Neil, my desk chair opinion is we keep Gabriel for another year and let Bielik continue to develop, giving us the following options in CB with Mertesacker, Koscielny, Mustafi, Gabriel (all very experienced and good enough Arsenal defenders) as Holding and Chambers continue their training at Arsenal with plenty of Europa and other cup games available to them. Obviously Holding has proven himself but he has time and injuries are likely to others throughout the season along with Mertesacker’s need for breaks. It’s better to have experience and let the least experienced spend more time developing and getting regular games… Read more »

For a club awash with talented youth players, I’m surprised one or two from our under 21’s didnt make it.

Whatever happened to Vlad Dragomir?

Yes but remember Zelalem tore his ACL in training I believe.

beilk and sheaf is tailor made for the formation that we are using now .both are midfielders converted to centrebacks . they can be like how eric dier is to sp*rs. eric dier can play both as a midfielder and a centre back , so if they wanted to change formation from a back three to a back four they just push him to midfield and vice versa .right now monreal does that for arsenal shifting from wingback and centre back . players like them offers so many tactical options , its good to have them in the squad

It’s what excites about Maitland-Niles, he’s comfortable and good enough to play in our midfield but has shown here can drop to the wing comfortably as he did earlier in the season in a cup game. Excited to see him develop more.

Bielik would definitely come good for Arsenal if managed well.

Hope we get to see him in some of the pre-season friendlies as it is something I always look forward to (seeing how the young players have progressed).

I believe Sweden is in their group, not Slovenia.

It does seem odd (but pleasing) that a team which tries to play attacking football, has 3 CBs and 1 FB but no MF or forwards in the U21 tournament…