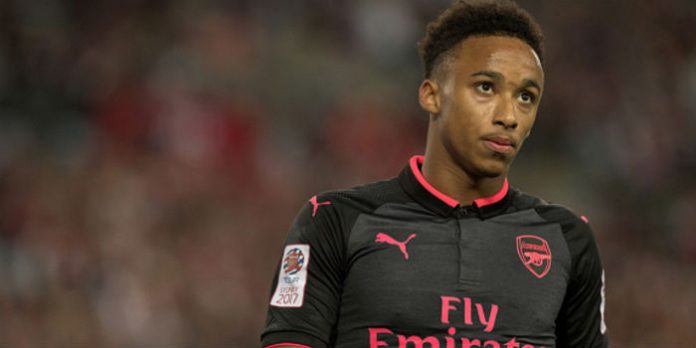 Cohen Bramall says he enjoyed the best night of his life after making his Arsenal debut in front of 80,000 people in Sydney.

The left-back, who joined the club from non-League side Hednesford Town in January, started the 2-0 win over Sydney FC having been a late inclusion in the Gunners pre-season touring party.

Speaking to Football.London’s Charles Watts, the 21-year-old admitted he’s still getting used to life in and around the first team squad.

“I still pinch myself. I thought when I came out I would be a bit more nervous than I was, but when I started playing I got into my stride.

“It was great, probably the best night of my life to be fair. It was an unreal experience and it meant a lot to me.

“I’ll never forget it and it means a lot to my family – hopefully there is more to come.

“Everyone asks me all the time has it all sunk in? And I always said I thought it would when I make my first team debut.

“And it has – it’s literally just sunk in. Words can’t describe it. I feel really emotional, I just can’t believe it.

“I’m just so grateful to put an Arsenal shirt on and to represent this club.”

Bramall also touched on how he found out he’d be on the plane Down Under.

“It was a late call,” he said. “There were rumours I was going to go but it was literally on the day when it was confirmed.

“I went home, packed my stuff and I was off. I’m just so grateful that they chose me, I’ve only been at the club for six months – I think I’ve come on a bit and they do as well, but I’ve got a long way ahead of me.

Jenkinson and Bramall may have Birmingham loan deals cut short

Five Arsenal youngsters that could debut in 2018

Whatever else happens in this guy’s career, it’s cool as hell that a guy playing non-league football a couple of months ago got to play in front of 80k. And didn’t do badly either. Whether it’s at Arsenal or elsewhere, he can make it at a good level

That just show how God can suddenly change a situation around.

Was bergkamp the scout or advisor on this guys inclusion?

Yes I was. What do you think I sacrificed my son for?

Not intending to start a religious debate here (heaven forbid) but I would imagine God has other things more worth his immediate attention than ensuring 1 guy has a reasonable game of meaningless football?

This is a place of football, not God’s house.

Oh dear, what have you done lol. Couldn’t agree more though.

Trust the average Nigerian to make every dang thing about God and Jesus. I know my folks.

Let’s keep religion out of this and respect each other’s beliefs. Sometimes we argue about the dumbest shit in the world and the last thing we need is people arguing religion on a football blog’s comments section. To each his own.

Bourbon. Bourbon can change a situation around real quick if you’re not careful.

holding and bramall for under 2 million . absolute bargain. they will come to be known as 2 amoung the best transfers of arsenal for years to come.

What a great attitude he has. Hope he keeps it when he makes it big. Such a refreshing change in these times we are in.

I love everything about this guys story. He looks like he’ll get a few runs in a league cup too. Hoping that he makes it big.

What an amazing story, I hope he can make it at Arsenal. There can’t be much difference in quality playing non-league and academy football, and he definitely had to work for everything that came to him.

He definitely has the athleticism and physicality, now he just has to adapt to the technical part of the game. I think if he can stay humble and hard working then he has every chance of making it at Arsenal.

I beg he carries on developing. He certainly looks the part. Imagine if he made first team in the next couple of years

All that stick we got for buying a non league player.

ahahaha classic!!!i imagined what u said and it looks so awesome,also that player of the month award was heavily based on his performance against mourinho managed stoke city (mourinho was fired in his 3rd year at manu)??

There is still beauty in the game.

He did well. But to be fair if we want to push for silverware this season, gibbs experience will definitely be crucial over him. Looks like kolasinac will settle into the back 3 so wide options are needed. A loan move away would do wonders.

Although i agree somewhat there are alot of top clubs are after a guy for over 100mil, with little experince. Amd they believe he can win them the league. Bramell can only deal with whats in front of him. So far he’s exceeding that

That one run in the middle of the park and his pace running forward really showed me his potential. Everybody mentions about Nelson, but 3I thought he was outstanding as well.

For a guy who played non-league months ago then made his name in the youth squad, I hope to see more from him.

Aye it was a nice run. Most full backs will stay outside of the midfield, which admittedly makes sense, but good to mix it up. I remember a few years back when Leighton Baines and Peinar (spelling??) had a really productive partnership at Everton Baines would end up running the inside channel often.

While I didn’t get that one, I have been getting a heap from Nike and Sports Direct promoting spuds and chelski tops lately. Hopefully your getting as Rev from impressions and not click through

We are all hoping that jose goes on space mountain and they don’t let him exot.

I love reading about this guy. He talks how we all would in his position.

Well played lad. Love hearing this stuff. These young lads making their debuts, getting emotional. They’re so much closer aligned to how us fans feel and think. Not media savvy yet, just spill it out. Best of luck!

keep your head down, continue to work hard every day, have self belief, keen to learn, ask questions, watch kolasenic, ask nacho politely to mentor you, and if all goes well you’ll be fighting for a left back spot in 2 years’ time. oh, and you probably gotta share a room with Jens for couple of months just to add some fire into your game.