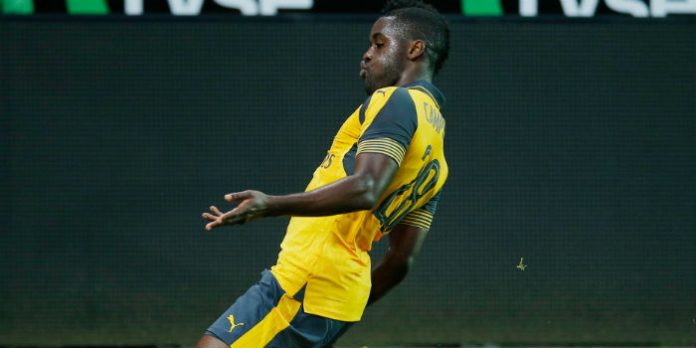 Joel Campbell has suffered a serious knee injury during the Gold Cup, and the Arsenal man could be out of action for as long as 6 months.

The Costa Rican forward picked up in the injury, reported to be a damaged meniscus, in a game against Canada, and now requires surgery to correct the problem.

Speaking to his official website, he said, “It’s sad and difficult to have to leave the team, it’s complicated when injuries like that keep you away from competition and playing for your country,” he said.

“I gave it my all, as I always do. Now I have to think about the recovery to return stronger and 100% support my teammates. The goal remains the same.”

It certainly complicates his future, as he was likely to have been let go by Arsenal this summer. He spent last season on loan with Sporting Lisbon where he had an indifferent time, but no doubt the club could have found some kind of suitor for him.

Now, he’ll have to wait until January at the earliest, as it seems unlikely any recovery can take place before the end of the transfer window in August.

Campbell linked with Serie A switch

we’ll sure miss him… lulz

Man, our fans can be cunts sometimes.

it was but a bit of humour.

ugh, you’re probably one of these people that finds Michael McIntyre funny…

I’d rather watch Michael McIntyre than Jim Davidson, and that was Davidson-esque.

I’d rather watch Sp*rs win the league than a Michael McIntyre stand up performance….

Have to partially agree would love to rip out his voice box with a rusty coat hanger….. To shut him the fuck…. But Spurs winning the league that’s abit to much I’d rather donate my organs to a third world county to ever stop that from happening

We’ll manage without your organs. If you could send us a couple of decent players instead of the gold diggers plaguing our league, that would be much appreciated

It is possible to recognise the fact that we probably won’t miss him at all while still wishing him a speedy recovery.
He didn’t quite make the grade with us but couldn’t really ever fault his attitude.
Frankly we need him off the books but he would leave with my best wishes.

Of course I wish him the best. It’s not nice that he’s probably out for 6 months.

Then again, he’s filthy rich so I wouldn’t mind breaking my leg for his wages.

Is that what you think? A broken leg for money? Not all surgeries are successful. Rehab after the surgery is a pain in the butt on its own. Do you have the mental strength to endure it?

Everyone loves money. But when health is taken away, everyone cries, the rich and the poor.

Nonesense.
Im sure we can find someone to do it for free b

ooooh, you’ve got some bite haven’t you? rawr.

@mootilated Where do we meet to carry out the needful?

Mootilated, look you know how it works around here. Just say what a nice friendly lad he is and what a fantastic bit of business it was to buy him by the fantastic arsene Wenger and everyone will be off your back

You’re probably one of those people that find being a knob funny.

dude, I made a harmless joke about a football player that has played like 18 seconds for Arsenal.

Just lame and unfunny, end of. The more you defend your weak joke the worse it gets… and yet somehow the funnier you become…

The guy has become a multi millionaire from Arsenal and their incompetence while the fans pay the highest prices in football, but no jokes please!

One of those people? He’s probably the only one…

no we don’t.. haven’t needed him since he signed tbvh..

“lul” in Dutch means dick. Make of that what you will!

I wish him all the best in his recovery. He honestly looked promising for us and I hope he can recover from this and establish himself at a team that values his talent.

I had secret hopes for this season that he would make a great RWB in this new system.

He mainly lacks end production, but has good crosses, fast, could dribble and a tireless worker. I think he has all the ingredients to at least be a back up option.

He has a good work ethic but I think, like the Ox, he’s just not good enough at defending to be a wing back. Could work against small opposition but against quality wingers I wouldn’t be too confident with him in that position.

He shouldve got out while he could.

I hope he has a good recovery whether he has a future at arsenal or not!

I guess he’s staying for now then

He didn’t get out while he could!

Best of luck with a complete and speedy recovery, Joel..

I was watching the game where he was injured (mainly to watch him). It was one of those where it looked like nothing happened, no contact, no awkward landing, and he wasn’t even limping very badly. But you could see from his face that he knew something serious had happened.

Good player, worked hard for us and did his best when we really needed help, very impressive for his country in the World Cup. Good luck to him.

Wez
Reply to  A different George

Couldn’t agree more. Like his drive and effort. Much like Lucas, not sure what he ever did wrong.

He should of listened to that man at the train station all those years ago.