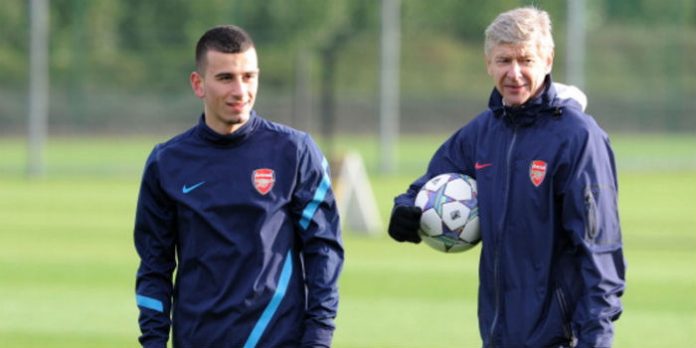 According to reports in Turkey, Besiktas have made a €1 million offer to Arsenal to remove a buyout clause stipulated in midfielder Oguzhan Ozyakup’s contract.

The Gunners negotiated a 30% stake in any future transfer for the Dutch-born midfielder when they sold him for €500,000 in 2012.

Ozyakup spent four years at Arsenal but never really made the grade despite being part of the 2009 FA Youth Cup winning squad and appearing regularly in pre-season friendlies.

He’s since had a very decent career in Istanbul and is now Besiktas captain and a regular in the Turkey national set-up having garnered Champions League experience. At 24-years-old and with a new 5-year-contract apparently agreed at the Vodafone Arena he still has his best years ahead of him.

So, will Arsenal accept the deal? On one level it could be €1 million in our pockets, on another, given the crazy prices in the transfer market, we could miss out on a bigger windfall if Besiktas decide to cash in on their star man. According to Sport Witness, West Ham boss Slaven Bilic, who not long ago managed Ozyakup, has been sniffing around.

It looks as though we’ve invited Besiktas officials to London to discuss the matter. If there’s an update it’s likely to come from the Turkish side, we’re notoriously passive when it comes to negotiating anything on the contract front. We’ll keep you updated.

Activate it and sell him to Bordeaux instead imo

can you read? its SELL-ON CLAUSE. not buy-back clause.

activate what? It’s not a buy back clause, it’s a % of a future transfer that we have.

Haha. I appreciated that comment even if nobody else did.

What about bringing him back? We do need a midfielder and I reckon he could do a job for us.

gooner
Reply to  The Director

No. And don’t accept the offer. Barcelona are about to spend €195 m of their neymar money on him.

Is it according to “Sky Sources?” Because if so then it’s pretty legit…

TheNicolau15
Reply to  The Director

He’s a very good player, but your comment it’s still so funny

Heavenly Chapecoense
Reply to  The Director

Plus his names rhymes with Ozil and Cup.

NO WAY should we accept this? Obviously if they’re trying to remove the clause they’re doing so because they believe he’ll eventually move on for a bigger fee! In the grand scheme of things, what’s 1m?

It’s a sell-on clause not a buy-back clause.

Why the hell would we accept that deal?!

Fairly sure we could find €1m in loose change down the back of The Emirates sofas. Not exactly an enticing deal they’re offering!

Right, time to apply for that janitorial position at The Emirates….

Imagine what you’d learn looking on AW’s whiteboard and on the scraps of paper in his rubbish bin. Then again, maybe you wouldn’t learn much! 🙂

It’d be madness to get of Sell-on Clause, so much potential, and he works so well with Inanimate Carbon Rod in the centre of midfield.

Jesus, what is it with Turkish clubs and their valuations of players? So a 24 year old playmaker/captain/national team regular is worth only £3-4m? Much like another Istanbul club thinking €3m is about right for Colombia’s no 1.

We all know Roma have bid £15m for the lad, that’s still £10m profit you can use to bid ludicrously low amounts for players from cash strapped mid table Spanish sides like Deportivo or for Chinese Super League cast offs

It Is What It Is
Reply to  David Hillier\'s luggage

It’s what their market allows…their revenue streams are limited and, can regress/or loose out on ECL dosh, ‘cos of 2/3 bad 5 year contracts/managerial instability.

They are going to try harder than most to get maximum value for least outlay.

Ospina would be seen as a major coup for then, but to some he’s dead wood.

If we are notoriously passive in contract negotiations how is there a 30% sell on clause in the first
place?

We don’t know either. According to stunned arsenal sources, they thought they had inserted a 95% clause instead.
That’s why they invited them back for talks.

€1m seems low. Current value according to Transfermarkt (I know, I know but needs must) is £10m+

At last our transfer business is all coming together.

Do I detect a hint of sarcasm??

So if I understand right, if Besiktas sell him for 10m, Arsenal make 3m.
If they sell him for 5m, we make 1.5m.
Since he is there captain and star, Im pretty sure its a bad deal for us to accept a 1m clause removal!

A little discussed fact is that we haven’t sold well under Wenger. Who was our highest sold player? Probably “You Guys” for 25m to ManU? Meanwhile Sp*rs, Chelsea and others have sold several players for over 50m. This is the part I don’t get about Arsenal transfers – that we don’t seem to take into account a player’s future valuation. We’ve saved nickel and dimes (by not buying Alonso for instance) without consideration of how much they might be worth down the road. It’s all fine to buy a Holding for 2m instead of Stones for 50m, but financially it… Read more »

Cesc to barca was about 35 million as i remember. That’s well over 50 million in today’s market.

A different George
Reply to  ontheup

I’m pretty sure we could sell Bellerin to City for 50m. Certainly we could have sold Alexis to them or PSG a couple of years ago for 70 or 80m. Do you think Spurs fans were happy when they sold Gale?

Bareth Gale, that is.

Arun
Reply to  A different George

I can’t figure out why they’re coming all this way.
Surely texting “Fuck off” is the only negotiation required?

Tell them to shove it. They clearly feel they’ll make more than 1 million from selling him so it would be foolish to accept their offer.

Seems reasonable.
May be more reasonable to bring him back. Could be the next Flamini

Predicting big things for him, Ozyakup half full.

I hope Arsenal have them fly in on their dime, get them into a hotel on their dime, and then when they meet on a luncheon on their dime, walk in and say “No fucking way.” Our scout/lawyer/FO/Board need to grow some fucking ‘nads and start drawing the line in the sand on shit like this.

Let’s sign him for 70% of his value. If they want debuchy, we add as part of the deal

1 million for 30% of what?
It’s likely he never leaves the club.
It depends on what that 1 million is worth to us now compared to 3 or 4 in however many years down the line, if at all.