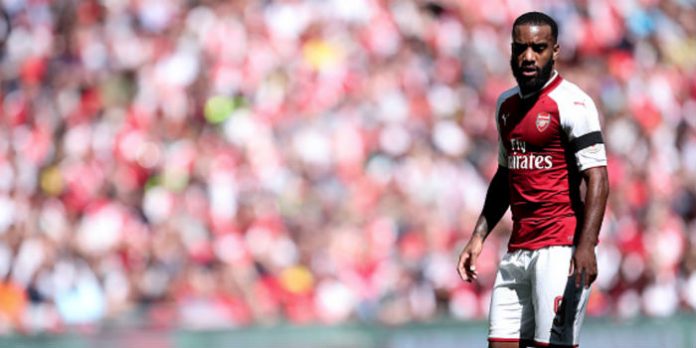 The Gunners had to break their transfer record to snap up the France international back in July and are hoping the 26-year-old can build on his two goals in pre-season when the Premier League kicks-off on Friday night against Leicester.

“I’m a big fan of him. I saw him playing for a long time in the French league and in the youth team. He was always a talent that everyone was waiting for him to grow into, and to be fair he did, he’s been scoring goals every season.”

“[Lacazette] has a different game to Giroud, which I think is good because you need different types of strikers.

“He did it in the French league and people might say it’s a different league but, with due respect to Lyon, he’ll also be with better players. I’m backing him to have a good season.

“You’re waiting on Lacazette to have an impact with the fee, I know you shouldn’t mention that, but that’s how it is nowadays.”

Lacazette has spoken previously about a chance meeting with Thierry Henry in New York that helped him to find renewed focus in his drive to reach the top of the game.

Speaking back in May, the 26-year-old said: “Thierry shook me up. He told me I always have to keep working on myself, which you tend to forget when you’re young.

“When a player like Thierry speaks, you can’t ignore what he’s saying to you. I realised that to be a great player meant permanent hard work. Someone like him always wanted to improve, even with the career he had.”

Let’s hope Laca ends up as one too.

Assuming our chief creators keep on creating like every other season, there’s no doubt he’ll score goals, but what will differentiate him from Giroud / Welbeck is whether he can earn his stripes in the big games home and away, putting teams to the sword in the big six pointers.

Like for 20+ goals in all competitions for Laca this year. Dislike for 19 or fewer.

Do we win the league or not? How many assists does he give? Does Alexis score 30 on top of his Laca’s goals? And Giroud score 20? How long is he injured?

Tell us these things and I can give you a sensible opinion.

And if the first is true I don’t mind how many he scores, it is irrelevant.

Like a good thing. Dislike something not as good.

Thumbs up for Jamon Ruffles – Thumbs down for Spu*s

I’m really looking forward to seeing Lacazette start in the league. He’s had a terrific record, albeit in another league, but just seeing his technique and ability sets him apart from the likes of Welbeck, Perez and Walcott for me.

Henry: on record, on la cassette.

i do think we need physicality in Midfield.if we dont sign anyone Arsene should try Kolacinac in defnsive midfield role.he has all the attributes to be successful there.he is baller,quicker,physical.he is our own Wanyama

No, actually we need to STOP playing people out of position. A player whose position is always unclear like Ox is one thing, but Sead is so clearly good at playing the left side you leave it at that and get a player just as clearly good at the position you need.

so u will bench Monreal?

Well in that case, let’s just throw Shaq in midfield – he’s a baller, physical, moves well for a big man, and I hear he’s available on a free!

King 14enry, and he would be perfect for set pieces. Clearly a no brainer.

I thought he was terrible at free-throws? Wasn’t that what hack-a-Shaq was about?

Wouldn’t be a bad idea to go two up top for some games as well, especially against teams that will just sit back and defend at the Emirates. Between Lacazette, Giroud, Welbeck, Sanchez and Walcott, we have a lot of pair combinations

If he’s fit, he’ll score 20 in all competitions. Not sure if he’ll score more than 20 in the league. He’s been improving in pre season, let’s hope he surprises us. At least we know have someone else other than Alexis with that potential to score 20 or more in the league. Theo and Giroud will guarantee you 10 – 17 goals if fit. Now all we need is an additional creator out wide(Mahrez or Lemar) and a CM that can help us keep the ball like Seri or Kovacic. We have to get back into the top 4 or… Read more »

I want top one and will not settle for less,

Long post: We have enough firepower and creativity to win individual games in the league and cup games. But, they say defense wins you championships. We need to keep our ‘DEFENSIVE FOCUS’ in the SECOND part of the season to have a chance. I don’t TRUST Bellerin and Ox in this aspect. IMO Ox and Bellerin can compete for RWB. Welbeck and Kolasinac can compete for LWB. If we play Giroud i would start Kolasinac on left and Ox on right for crosses. If we play Laca then i would start Welbeck on left and Bellerin on the right to… Read more »

Not sure about Welbeck at LWB, I think it makes more sense for Monreal to be second choice there behind Kolasinic. Agree otherwise because despite all the focus on Lemar and Mahrez, I think we’re already really strong in those areas. If I could only strengthen one position in this team, it would be CM. Specifically, a ball winning CM, a Coqulein upgrade if you will.

I think LWB is ideal for Welbz because he will get his minutes and can also make a meaningful contribution to our attack from there. From what we have seen so far Welbz isn’t prolific enough to be a forward but he always puts in a fantastic shift and combines well with players. I agree on your CM suggestion and would very much like one but i’m struggling to understand how we will be able to keep everyone happy if we sign a CM. My reasoning behind CB is that it’s clear BFG is retiring and Kos has injury issues… Read more »

Oh dear are you predicting relegation

It would be great to have options of Beast/Welbs LWB and Bellers/Ox RWB across all competitions with
middle defensive options of Kos/Mon/BFG/Mustafi/Holding/Chambers.
But would the second choice players be happy with their lot?

as I mentioned there is no such thing as this nonsense Plan B There are different tools to unlock opponents. As Henry says, Giroud and Lacazette (or even Welbeck) offer different attributes (even an Alexis or Theo up top) and we need all permutations. What Lacazette can bring which Welbeck lacks currently is killer instinct. He’s a natural finisher. Welbeck needs to relax and not rush things in final application. Giroud is also an excellent finisher and in many ways there is reason why he starts ahead of Lacazette for les Bleau. He brings in the second line of attack… Read more »

What Chelsea has done wrong is what we have not.

They let Costa leave where we kept Giroud.

They’ve pinned their hope on Bashuayi and Morata.

We have our hopes on Welbeck and Lacazette but we’ve also kept the excellent Giroud.

Lose comparison but none the less food for thought.

That affect that Henry had on Lacazette is the exact reason we need more club legends on our staff.