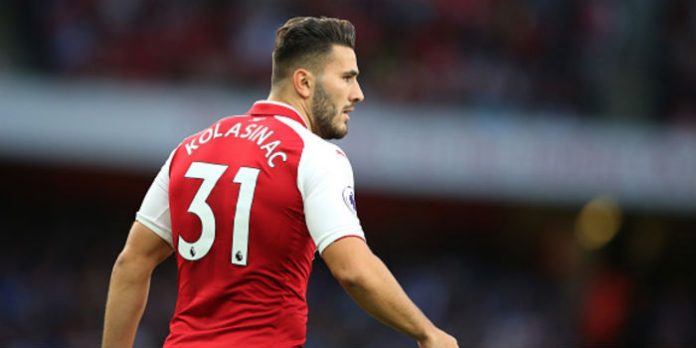 Sead Kolasinac says his Arsenal debut was emotional after a frenetic opening game at the Emirates that saw Arsene Wenger’s men come from behind to snatch a late 4-3 win against Leicester City.

The Bosnia international operated on the left side of the Gunners makeshift three-man defence and impressed with his willingness to get into the opposition half. The 23-year-old even helped himself to an assist as he set-up Danny Welbeck just before the break.

Speaking after the game, the free-signing from Schalke admitted that he’s still getting used to the pace of English football.

“I don’t like to make comparisons [between leagues] but I can say that here the pace of the game is a bit higher,” he told Arsenal.com.

“It really goes from end to end and that’s impressive. It takes time to get used to it, and you need time to do it, but that will come from game to game.”

On the game as a whole, the free-signing from Schalke added: “It was very emotional and very dramatic. I think we started well, went 1-0 up straightaway but then conceded. That was a blow but I think we had the game under control before we conceded the second, which was really annoying.

“We made it 2-2 before half-time and said then that if we could score soon after the break, we’d win the game. But then we conceded again and had a 10-minute phase after where things didn’t go so well.

“But then it was a game going at one goal. We made it 3-3 and managed to get the winner soon after. My first Premier League game was very emotional.”

Arteta on Willian’s future: We are talking to his agent

Happy with the win obviously and with the makeshift back 3 you can be more optimistic for future games, Kos, Mert and Mustafi all make that back three stronger. Monreal stays in but as the left sided of 3 with Kolasinac as LWB. Throw in Ramsey and Sanchez and you’ve got a far more potent attack too..still think CM is key..another quality option is needed

Amen to that and move chambo into bellerins place on the right love hector but he just does not seem to threaten as much as he did when we played 4 at the back. If you look at the map most of the play was going down chamberlains side leaving hector in acres of space yet didn’t seem to do anything with it. With his pace I want to see him push the byline and be a bit more of a nuisance, he seems to bomb it down the wing the turn around and make a pass parallel to the… Read more »

Completely agree. Amazing that this gets such positive agreement from the general fan base too. Blogs – take note. I know his isn’t your opinion.

This is why I long to see our little magician Santi back. It feels like years since he’s played for us, but what a difference it makes when he’s in our squad.

Awesome BEAST!! With a sensitibe side to go with it.
What have we got ourselves in?

Cannot wait to see him Fuck up arnoutovic

Arnautovic is with West Ham now.

True, but we’ll have to wait until December since he left the Orcs of Trent for Stratford.

Who you totally know plays for West Ham and not Stoke.
I am not saying I’d like him to kick Shawcross in the back so that he flies head into the post, while scoring his fifth of the game, but if he could I also wouldn’t be against it.

arnautovic plays on the left side too, so they’ll hardly meet

You beauty! Would like to see him at wingback though. Rob Holding needs an experienced CB beside him.

Same, and yes, holding is a great prospect but Monreal didn’t help him out much and Bellerin left him pretty exposed. Felt for him really.

I thought the admission was going to be that ‘I was told we’d never win with Mike Dean as ref’.

Leicester must have made the mistake of getting on the wrong side of Mike Dean’s ego at some point. Pretty sure they were moaning before and after the break that he didn’t blow for half time before Welbeck scored, even though he was right not to do so.

Definitely as he is very anti Arsenal and much too friendly with the opposition players i.e. Vardy.

What a Sp*rs fan.

A different George
Reply to  C.B.

I thought Dean had a good game, words I never thought I would say. Apart from not fucking Arsenal, he also didn’t ruin the flow with constant whistles and cards, didn’t try to make himself the center of attention, etc. First, Anthony Taylor gives Victor Moses a second yellow for diving in the Cup final, now Dean. What have they put in the water at the referees’ canteen?

He will be an attacking force for us down the left

Twas an emotional rollercoaster for me too my new friend.

Welcome to The Arsenal mate! 🙂

Without Koscielny or Per to provide leadership we suffered abit but thats normal in this league. Then positive is that our fighting spirit got us through the game.

There’s so much that can be discussed from that first game. But, I believe that the MOST important thing that I learned from that game is: 1) Xhaka is key to our team – our defense is not very brilliant or commanding (and frankly even when our regular CB are back, I don’t expect our defense to be any much stronger than last year), so if Xhaka has a bad game, it’s game over for our defense. A Xhaka bad game is bad for our attack as well, without him pulling the strings from back there, I don’t see our… Read more »

Ever since the switch to the back 3 he has been outstanding as has Ramsey coincidence or not I’m loving it.

The initial signs are positive.
He’s got a lot of very good attributes, pace+power+Unbelievable Tekkers.

Charlie Adam is bricking it…

>“It really goes from end to end
You hear this a lot about the EPL, but why is it so? Cultural thing? I mean it’s not necessarily better. EPL team are not dominating in CL. So why do all teams play at this pace? Just asking

Well done arsenal for not giving up 3 points well earned

Kolasinsc wasn’t a free signing by any chance? Was he?

Kolasinac was a free signing.

If Sead keeps on playing like the way he has, I feel our Beastly Koala is a new legend in the making.

Arsenal need a ”tank” in midfield we all can see it but Wenger unfortunately always thinks he can get away without it… Just like he persisted with Denilson arteta et al.. We will not be competitive this season with out an athletic combative central midfielder to complement Xhaka…someone like Le coq but with more skill..not a Cazorla type player I had an eye on Bakayoko but sadly the chavs have him already Goreztka is still available if wenger is looking for one with a bit more skill… I hope Wenger can get over his obsession with skillful players and add… Read more »

Kolasinac Monreal Bosscielny Mustafi Ox
These five would be amazing at back.

You thought it was emotional!!

I woke both the kids up with my noise and got a straight red from the missus!!!

I was expecting, “I have Alexis’ dogs; he’ll sign the contract!”

That settles it. This season I’m getting “31 Koalasnatch” printed on my shirt

Thanks for drenching my keyboard with hot tea.

‘Koalasnatch’. A word I must try to use more in conversation.

I mean we had a make shift back 3.

An inexperienced Holding, Nacho in the middle, Elneny in midfield, its not surprising we were so porous.

Our main back 3 IMO should include Koscielny and Mustafi centre and right. Which leaves either Nacho or Kolasinac left side.

Holding and Chambers can thereby be cycled in more effectively without compromise to the solidity of the unit as much.

When Gabriel comes back he is also option centrally or on the left.