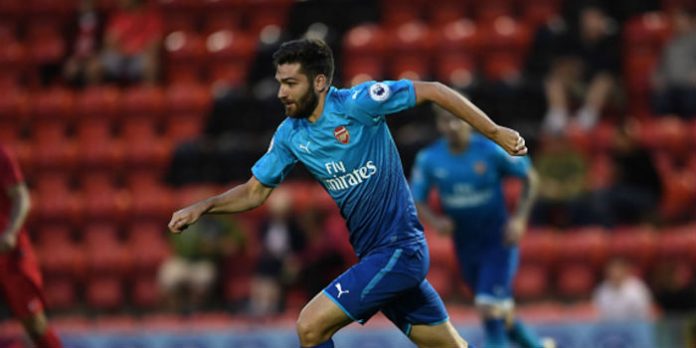 Jon Toral is on the verge of joining Hull City on a season-long loan, according to ESPN.

The move to the KCOM Stadium would be the Spanglish midfielder’s fifth move in three years following stints at Brentford, Birmingham City, Granada and Rangers.

Toral, who signed from Barcelona alongside Hector Bellerin in 2014, penned a new contract in January between swapping Spain for Scotland.

It’s believed the extension was offered by Arsene Wenger with a view to protecting Arsenal’s investment, however, at 22-years-old time is running out for the midfielder to make an impact at the Emirates.

He wasn’t included in the Gunners first team pre-season touring party, seemingly falling behind the likes of Reiss Nelson and Jo Willock in the pecking order.

VIDEO: Nketiah scores off the bench to send Wrighty wild

Martinez: Decision to join Reading is paying off

I don’t understand the point of these loans anymore. Inflates the squad, defers a decision on their future by 12 months, and it seems no matter how well they do they do not get a chance to impress in the first team.

If they’re not good enough just let them go!

Completely agree, sell him on the cheap with a 50% resale or cheap buy back option.

Exactly . Just sell him already . These endless loans are not doing any good to any players. And it’s only stretching out already thin wage budget

Arsenal will be loaning him and Joel Campbell in 2024

It is not that simple,some times you dont get buyers,or you don’t get the right price and sometimes the player is not willing to move.
Numerous factors are involved,besides having to loan them is all bad, you just keep loaning them time and again until you find the right buyer. Chelsea are employing the same strategy, i believe they have approximately around 30 player in loan here and across Europe….something has to be right about it.

I dunno i am sure there are half decent sides out there that would be very open to signing ex-arsenal players. Does come down to wages with some of them though i.e. gibbs and jenko both rejected moves away due to having to take pay-cuts

I agree, Wenger needs to sell some of these players that obviously won’t be part of his plans going forward even if it’s for below what he’d like to get for them. I know there may not be many permanent transfer suitors for many of these players. Really disappointed that his stance now seems to be offloading dead weight vs trying to get in another quality player or two to take us to a higher level. I know we have a deep squad in terms of numbers, but there is not the top end quality in enough areas that we… Read more »

It’s annoying as Toral is the likely and most similar back up to Xhaka. Means once Xhaka is out/suspended, we have to change our entire midfield set up.

FFS, he did everything possible on loan. Didn’t even get invited to the first team during preseason.

I think he’s a very good young player and it’s a disgrace that he’s never been given a chance. His loan managers have all commended him and he’s shown he can adapt to various midfield roles successfully. Arsene has his favourites and he can be very unfair to players like Toral. I agree he would have been an excellent backup to Granit, but he’s adaptable so he could cover so many midfield scenarios. This actually makes me angry, and I hope wherever Jon ends up this season he plays a blinder and enjoys the success he deserves.

Agreed.
Just more nonsense of Wenger’s favoritism. Total has done everything required on loan, and if he’s not chosen because of the number of CMs, then that just proves Wenger just goes by an invisible hierarchy, rather than actual performance.

I liked the look of him , but think he’s a gonner now .
Shame

Wenger should make up his mind either the player is good enough for Arsenal and should keep him if not he should sell him but to send a player on loan three times it is not understandable especially when he is complaining that the squad is unmanageable because it is too big. he should get rid of players who just make numbers and sign quality player who can contribute to the success of Arsenal

Clearly not cutting the mustard. We could sell if there was interest and willingness/ability to pay.

The only player to impress sufficiently this pre-season IMO is Reiss.

We don’t need any more projects and potential ifs around the first squad. We need proven ability.

Why players that go on loan 2 seasons in a row ever go back to the previous club? wouldn’t that be better to grow and get better on a club a player already knows and understand?

Guy like Toral would be better off going back to club he was at last season so there isn’t really an adjustment period for him and the manager knows him already.

I’m surprised no lower level Premier League clubs weren’t in for him. He’s already shown at Birmingham that he’s probably too good for Championship level football. Or is there so much money in the prem these days that the likes of Brighton, Bournemouth and Swansea don’t need loan players?

It’s been obvious for two years that Toral would never get a chance with the first team. We don’t have to loan players out til their worth is “high enough”, just sell them after a successful loan spell, and add a sell on/buy back clause. It’s that simple. Let others do our job for us, like literally every other big club does.

I am a fan of the player, he does really great on loan, certainly more than some of our W players, yet, not wanted. I understand that his position is blocked by many players but for FFS, in their so called 33 man squad (though not as many now) some deserve to get a sack or a spell in U23 to remind them that they are no bigger than the club and they deserve the same “punishment” when they don’t deliver.