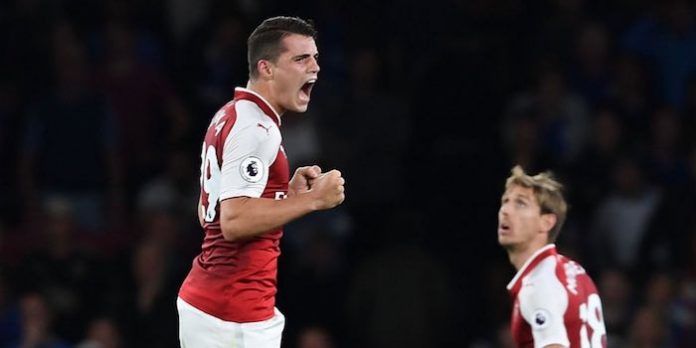 Granit Xhaka’s errant pass during the first period saw Leicester take advantage and go ahead through Jamie Vardy, but the Swiss international said it wasn’t something that dented his confidence.

Instead he worked hard to make a contribution at the other end of the pitch and ended up with assists for Aaron Ramsey’s equaliser and Olivier Giroud’s winner as the Gunners came from behind to snatch victory.

Speaking to Arsenal Player after the game, Xhaka said, “The second goal for Leicester was my mistake but it was important that I kept working. I wasn’t nervous after the mistake – and the two assists were important for the team.

I’m happy for the win. I think everybody gave their best. We were focused, our mentality is so strong and you could see that today. I’m happy for the team. We won today and the win was important for us.

“You see we have good players on the pitch and these players who can come off the bench. Aaron and Oli both scored, it’s important and shows that every player is ready and that’s important.”

It was something of a hit and miss performance from Xhaka, but thankfully the hits were enough to ensure we didn’t miss out on any points.

Read today’s Arseblog: Arsenal 4-3 Leicester: I want my Arsenal back. Oh, it is back!

Arteta: Xhaka will be missed but injury could have been worse

And Xhaka looks like he has stepped up, good news.

With a very strong bench too. Just get our defenders back and we are looking stronger.

Nor now we’re not, Burnley top at moment.

Well it was a bit odd this pass out to the right. But normally you have a RB waiting exactly there not a RWB who thinks he is a RW. Bellerin was always very high up the pitch and didn´t do Holding any favors. But yes bad pass which led to a goal

am looking for the double drag back Kola did… I WAS INSIDE THE TRAM/TRAIN WHEN THAT GIROUD GOAL CAME IN. BEEN THE ONLY BLACK INSIDE LOOKED WEIRD WHEN I SHOUTED WITH A LOUD VOICD GOALLĹLLLLLLL….COYG…

This trully made me lol

I WAS OUT FOR A MEAL AND MISSED IT, AHHH

I suspect a lot of supporters Arsenal & Leicester were still in the Bog or queuing for there Burgers or Bangers or Pies when Arsenal scored that early goal.

that’s my homeboy repping arsenal wherever he is

I was holed up inside my house when Giroud’s header went in off the underside. That goal lit up my soul more than my favorite presidential candidate who, coincidentally, had been sworn in a few minutes before the goal

First, it was a bad pass from Elneny to Xhaka who was attacked and could not play the ball.

i totally agree with you. That mistake wasn’t only Xhaka’s at all.

Xhakas performance was that of Arsenal’s. The good outweighed the bad.

We should take great confidence that we can come from behind late it the game to win. And confidence that the bench can make a big difference. And we have things at the back to focus on during the week. Great result all round…

If he keeps growing the way he is? Then he’s going to be some player.

Sometimes (and this not about one single player) we tend to play out a little too much from the back. One square pass, or one misplaced pass under pressure, and we’re in big trouble. I guess it’s very Arsenal but it seems that every single mistake we make tends to be punished with a goal…

Misplaced passes are a normal thing in football. I was more concerned with our defense not being able to handle a simple 4v2 inside the box.

Let’s hope Xhaka doesn’t make the same mistakes again, may not get away with another time.

Mistakes do happen. Its how you respond.

But our midfield balance is still not there.

Elneny is still for me not adding what we need.

Sideways passing mostly because he doesn’t have the ability to complement Granit with vertical penetration.

We need someone who can dribble IMO and hold the ball like Santi.

I was more upset with the marking at the corner to be honest, but I’m glad he’s looking to at least some responsibility . Hopefully Wengers post match comments about training ground fixes are true

You didn’t mention his sublime pass to the Welshman… I don’t watch sport which has “periods”, where are you from, Womensville??

This is 2017. Where are you from? Fascistville? Chauvinham? get the hell out.

I’m very happy for the win with that back three ****

So many of our players have a mistake in them.
Cech, Holding, Xhaka, Ox, Ramsey…..costing us goals