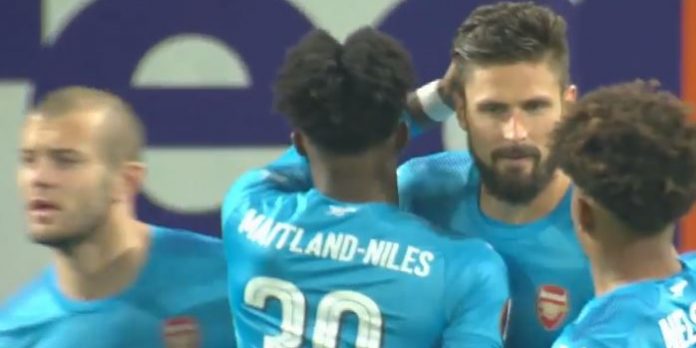 100 – Goals for Olivier Giroud
153 – Minutes per goal average for Giroud
38 – Assists for Giroud
111 – Minutes per goal scored/assisted average for Giroud
618 – Shots taken by Giroud
16 – Percent finishing rate (100/618) for Giroud over his Arsenal career
16 – Percent finishing rate for top strikers¹
4 – Goals outside the box
96 – Inside the box
6 – Penalties
59 – Left footed
10 – Right footed
31 – Headers
70 – Goals in the Premier League
14 – Goals in the FA Cup
12 – Champions League goals
2 – League Cup goals
1 – Europa League goal
99 – Goals Giroud has scored in actual competitive matches
1 – Goal people are counting from the Charity Shield friendly toward Giroud’s 100 goals tally
1 – Goals I’d prefer we wait for (it will happen) before we count him as having scored 100, but I’m not writing this bit again when Giroud scores his next goal (probably this weekend)

Follow me at 7amkickoff on Twitter and 7amkickoff.com
Sources: ESPN.com for Giroud’s shots and goals data; Orbinho on twitter for Giroud’s body parts scored data; Whoscored.com for the game data; my database for expected goals

¹In 2012 I compared Messi, Suarez, Ronaldo, Higuain, van Persie, Falcao, Cavani, Bale, Giroud, Walcott, Cazorla, Benteke, Gervinho, Rooney, and RvP from 2011, and Suarez from 2011. All of their goals divided by all of their shots from that season (League play only) = 16% finishing. All players score at a 10% rate, strikers score at a higher rate. Is it 16%? I don’t know. I have half a mind to check my data again some time but not today. Internationals? Ok, I’ll do it then. But for now, my initial reaction is that Giroud scoring at a 16% rate is very good. At least, better than I thought he would. I may also take a look at the minutes per goals scored/assisted (because that will be easy) in that same article. My guess is that Giroud also comes out favorably.

I was waiting for somebody to use master bate. Surprised it took this long.

My first reaction was “Don’t tell me he just did what I think he did. He actually did it.”

I’m impressed that we managed to master BATE without using our coq.
That’s a neat trick.

It’s sexist to think that you can only master BATE with a coq.

Being men’s football, of course our Coq would be at the center of it.

We should give credit to Walcott’s set piece deliveries in this game.
His corners, particularly, were sumptuous. Holding should have had a brace.

Thanks for the analysis!

I think what this misses (and not sure if the stats will be able to add much to this) is that Giroud is not the type of striker that will take on a defender/dribble and get a shot off. His shots tend to be more close range and so it boosts his conversion figures.

Not that I’m complaining! Just feel that saying he has better stats than strikers like Messi and Suarez is a bit off IMO

I don’t see where the article claimed he has better stats than Messi and Suarez. Could you enlighten me, please?

Messi and Suarez have significantly better stats that Giroud. They were just part of a large group of strikers I studied.

What a complete midfielder Wilock looks. Comarding and combative.

Jacks intelligence and movement on the pitch is joy to watch.

Would not of thought Theo’s stats were that good. Still getting frustrated at him straying needlessly offside. Also his decision to shoot instead of tee up HFB (at least twice) had me tearing my hair out.

Not gonna lie, headline and first sentence cracked me up. Good job blogs

Giroud was sub a lot last season. I wonder if substitutes have a better shots to goals ratio than starting players – the reason being that subs are typically on in the last quarter of the game, where defences tire or teams stretch, so the chances are bigger. I don’t know if your database enables you to answer that sort of question.

Not sure of the Wilshere through ball stats;

I recall him playing in Theo whose shot hit the post. Then another through ball played in AMN whose square ball towards Giroud was cut out by a defender.

Thank you so much for the Ramsey’s waving arms stat! Appreciate it!

where is fat gooner these days? At the beer fest?