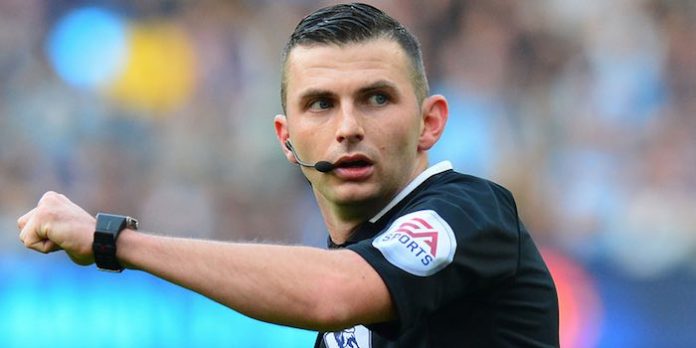 The Gunners haven’t won at Stamford Bridge since 2011, when a crazy game saw us run out 5-3 winners against an Andre Vilas-Boas managed blues. After the defeat at Anfield, it’s imperative that we get a decent result on Sunday, but those of a suspicious nature might think our chances of that are diminished with Oliver in charge.

Arsenal's win % with Michael Oliver officiating is 21% – the lowest of any official for our games in PL history (Min 15 games).

Since 2010, Oliver has refereed 19 Premier League games involving Arsenal, and the Gunners have won just four of them.

It’s not as if he’s been in charge of us in all the big games with big teams either, the run includes defeats to the likes of West Brom, Aston Villa, Crystal Palace and Sp*rs.

You can see a full list of those games here.

If there is a silver lining though, it’s that he has taken charge of Arsenal v Chelsea twice and we have yet to lose. He was the man in the middle for last season’s 3-0 win at the Emirates, and also presided over a 0-0 draw between the sides in 2015.

This will be the first time he’ll be in charge of a league game between the two sides at Stamford Bridge.

I was just about to refer to our FA Cup win at Old Trafford – he was the referee in that game and spotted TWO dives (di Maria and Januzaj?)

Drogba doesn’t teach diving lessons at stamford bridge right? He was the best in England.

To be honest what concerns me more is Arsenal actually turning up at Stamford Bridge and not playing like total cunts. I want to see us turn up and perform, not shrivel up like a Johnson in cold water. I want to see us play with a bit of belief, with a bit of pride in the shirt. When I was growing up Chelsea away was a guaranteed 3 points, they were fucking nobodies, worse than a pub team. We used to put them to the sword with our reserve side. So, i want us to show up and actually… Read more »

Did you say that before our 3 wins in our last 4 meetings ?

Martin – we haven’t beaten them at their place since 2011 when that Dutch Skunk was our captain.

Not to mention they also won the league last year…. and obviously didn’t.

When was this period you speak of when we regularly destroyed them?

Yes I wistfully seem to remember a 17 game unbeaten run against them. Pre Maureen of course.

when you pre Maureen, what you mean is pre stolen Russian blood money right?

I’ve lately realized gallows humour works best when you’re supporting Arsenal. And to know that we are losers now. So no expectations. Just surprise us, maybe? Or not. Is cool.

You understand they have an owner who doesn’t care about losing money right? Bought themselves into legitimacy. To just ignore that and expect Arsenal to win because they are Arsenal is stupid. The game has left you behind I guess.

Left me behind? What are you harping on about chief? ‘They have an owner who doesn’t care about losing money.’ Ermm… last time I checked, and I am in no way an expert on Chelsea’s finances, but they do make money hence Abramovich is still there. Also, wake up. Arsenal are just as rich as Chelsea, if not far more wealthy. You do realise that our other major shareholder, Usmanov, is in fact richer than the Chelsea owner Abramovich. The difference between the two clubs is sadly that Chelsea are run as a football club first and a business second.… Read more »

The ref has nothing to do with tha shit performance vs pool, it is up to us.

Yes, but the ref has been the reason we’ve lost plenty of games when we’ve played OK. So lets hope we play well enough to win and the ref lets us win.

And the ref has been the reason we’ve won plenty of games we might not have otherwise too. You only remember the ones we lost because they’re hard to shake off while the ones we win; nobody gives them a second thought.
Refs can be shit & every team suffers, not just arsenal.

Not many wins due to the officials, but a few.
Many more losses due to officials though…
Others do suffer, but some much less than we do (Leicester won the PL because of the officials and the spuddies defence has received major assistance from them as well).

He did alright for us in the Man Utd game away, when he sent off Di Maria.

We just need not fuck it up ourselves.

Been thinking a lot of whether Ozil will start this game. Hard to drop Welbeck after two goals in the recent game, and would Alexis pressing and running be preferred over Mesut’s excellence on the ball?

I appreciate what you did there mentioning Sp*rs.

If we don’t let the ball in the net and score at the other end.
I’m pretty sure he won’t rule them out.

Thanks for the insight Michael Owen

Are you sure? I’ve heard him called Mike ‘Blind Man’ Dean, Mike ‘Spuddie’ Dean and Mike ‘The Cunt’ Dean, but this is the first time I’ve heard Leslie…

If he is worse than Mike Dean then he is sensationally rubbish.

Are there any matches anyone can remember where we got the balance of (undeserved) favourable calls for us?

I can think of loads where we got unfair unfavourable calls. Having Mike Riley as the head of the referees association is not good for us.

Kwame Ampadu Down
Reply to  Pedant

Nonsense Pedant. It’s the same whinging you’ll hear from fans at every club.

I think the ref’s decisions were very favourable towards us in the FA Cup final.

Favourable, maybe. Victor Moses thoroughly deserved to be sent off. Thought the call was some of the best reffing I’d seen in years. Whole match really.

I’m not sure we can blame Michael Oliver for the 3-2 defeat at home to WBA when we were shite basically, or the Crystal Palace defeat away last season when the boys were already on the beach, or the Liverpool 4-3 defeat at home when we tanked it in the second half. Let’s face it, Arsenal don’t actually need the ref’s influence to find a way to lose matches these days. We have plenty of ways of screwing it up ourselves.

Good referee: not influenced by the crowd, and makes decisions. (Yes, he makes mistakes; so does everyone.) When Anthony Taylor gave Moses the second yellow for diving, I was shocked. I would not have been nearly so surprised if it had been Oliver.

I generally think Oliver is fair. I love when he sent off (the Angel of Mary) Angel DiMaria for pushing him in the FA Cup win at old Trafford

We’ve won every FA cup game he has reffed for us!

The result will depend entirely on which Arsenal turns up.

Shame this is a league game then!

Transfermarkt says Oliver has officiated 8 defeats for us in 25 games but only 3 in 24 for Chelski. Mind you they have done better than us anyway, whoever the ref, in those 7 years.

One of the better Refs and young too not like some of the dinosaurs.

I don’t think there’s anything personal here. We simply lose a lot more games these days, regardless of the official.

Best Ref in England imo. Surprised about our low win percentage with him reffing out games. I seem to recall him in charge of some key victories. Anyway, he’s better than the old blind farts that usually ref out games.

I wondered of the 3-3 away to Bournmouth last season was one of his games, and it was. I thoight that was a terribly inconsistently officiated match, one that went unremarked upon. For instance, xhaka’s push leading to the AFCB penalty was not nearly as hard or as blatantly in the back of the opponent as was Fraser’s shove of Bellerin in the box leadin to their 3rd. Even Lee Dixon, commentating during the match, observed some cliche like “that simply isnt good enough from the young lad, he’s got to be stronger there.” I couldn’t tell whether Arsenal were… Read more »

Kwame Ampadu Down
Reply to  Jasonissimo

The game where the Bournemouth captain got sent off for a tackle that was nowhere near as bad as the one Flamini did in the same fixture the season before when he didn’t wven get a yellow. That one was unremarked upon too.
Refs are shit. Sometimes it works for us, sometimes not..

Jasonissimo
Reply to  Kwame Ampadu Down

At least compare incidents within the same game.

Check out his record when officiating Chelsea. Especially at the Bridge http://www.worldfootball.net/referee_summary/michael-oliver_2/chelsea-fc/4/

100% Arsenal success rate with Oliver in charge in cup ties.
At the end of the day it’s what Arsenal do, not the referee.

If only! I have lost count of how many football games that have been affected by wrong decisions. The refs need help and that has been clear for years, nobody can deny it. Expect a few decisions to go to the home team come Sunday, it is inevitable. The refs are humans. They read the news, they feel the atmosphere, and they make decisions in the moment as any human would.

I like him out of the refs we have. As far as I think, though haven’t verified, that one of the main funders for the refereeing association is Sky. Might be wrong but this on first glance appears to be a conflict of interest as Sky’s interest is having good occasions to market and sell, while the refereeing body’s would be to apply the law consistently and transparently. So my expectations aren’t high for good refereeing, but that is just my view. That said, Michael Oliver was the ref who sent of Rooney for swearing at him at Old Trafford… Read more »

Yeah but he is a good ref at least. Hardly a Dean.

Michael Oliver’s one of the country’s better refs, I can’t recall too many games where he makes absolute blunders or seems comically biased towards one team. He does also seem to get the bigger games so we’re clearly going to have a lower win percentage with him than others – since 2013 he’s only refed 3 of our league games where we weren’t facing what Arsenal calls ‘Category A’ teams (Bournemouth, Palace and Everton all last season).

Much rather him than Mike Dean, at least with Oliver the game will be more down to either teams’ performance than the ref’s.

Glad it’s him vs some of the other referees. As a referee have always been impressed with him, very consistent, doesn’t fall for diving and mostly gets calls right.