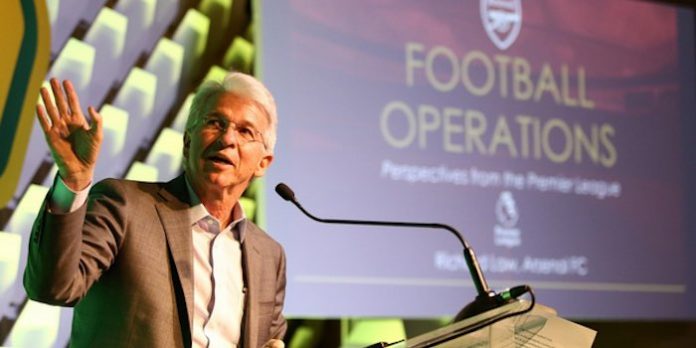 According to the Telegraph, Arsenal’s chief transfer negotiator Dick Law will step down from his position at the end of this month for family reasons.

After helping the club recruit Gilberto Silva and Carlos Vela during a stint as the club’s scout in the Americas, Law joined the Gunners on a full-time basis in 2009 taking over a role that had previously been done by David Dein.

He’s since played a fundamental role in signing the likes of Mesut Ozil and Alexis Sanchez although his time at the club has also been pockmarked by a number of high-profile failures in the transfer market, including the botched attempt to sign Luis Suarez.

Back in May, Law, a lawyer, Fifa-licensed agent and an accomplished linguist, explained what his role entails:

“The area that I manage is called football operations. My job is to help the CEO and manager, in conjunction with the contract team, with squad planning, contract negotiations, negotiations with agents, player transfers, either in or out of the club, and coordination with the Arsenal academy.

“I work very closely with our chief financial officer, our general counsel (the lawyer for the club) and our club secretary in the contract team. Our biggest challenge is to make sure that all the contracts are done right and we follow all the rules set by the FA and FIFA.”

Law’s departure leaves a void in the legal team even though Arsenal recruited Huss Fahmy from Team Sky cycling in June to work on player contracts. The report claims that Ivan Gazidis has now taken an office at London Colney and it’s suggested he could have a more hands on role with the day-to-day football operation.

Best of luck to Dick. He’s apparently a very popular figure at the club, we wish him well for the future.

Remember it was Dein who introduced Kronke to the board! Dein is not the knight in shining armour that he always seems to be protrayed, but a guy who made lots money buying shares then selling off firstly to Danny Fiszman (who then sold his shares to Kronke) and then Usmanov.

Niceties apart, it’s hard to think anyone outside the club will lose any sleep over this departure.

Knowing what the board is like, we’ll probably replace Dick with some twat..

Too Drunk To Be Offside
Reply to  Kroenke\'s 7th horcrux

The fewer Dicks at the club, the better.

At times it seemed Dick was nowhere to be found when we really needed him to come through. He seemed to be in Costa Rica for a decade in search of Joel Campbell. At other times, Dick seemed to be to in your face, which some found offputting. Dick was always a hard negotiator and we probably should have been able to get Suarez for that 40 million plus 1 offer. It remains to seen who replace him with, and while I currently think we can do much better, it could turn out we miss ole in your face hard… Read more »

I obviously don’t know everything about his job, but I think it’s fair to criticize Dick Law for things like price negotiation (selling players at a lower price or buying players at a higher price than we could get for them) but as far as failure to sign players or our general cluelessness in transfer windows go, that’s more on the club than on him. Unless I am wrong and he has a much bigger role deciding our budget and how much we are willing to pay for any player, the poor chap probably just follows instructions. I mean, if… Read more »

Even player price isn’t decided by him, but by Wenger. Like all negotiators, Wenger gives him a compromised price, and ideal price, and the walk away price, and leaves it to him to negotiate, but it’s well known that Wenger sets the price of players (a good example being Ornstein pointing out that Wenger set the prices for Gibbs and Perez).

Imo, that’s just something Wenger should’nt be involved in.

Were it not for Wenger the keystone cops elsewhere in management couldn’t convince a paper bag to come to the emirates, let alone understand at what point their usefulness is outweighed by their cost.

And what is your source for this amazing piece of information?

“Dick was always a hard”

I wouldnt want dick in my face.

The Coq is still here so i am calm.

Good start but the organization needs a complete face lift.

Thank goodness. He has been disappointing as of late and we have lost out on targets and failed to act quickly in terms of contract renewals in certain cases. Our transfer and scouting team are said not to be rated in europe. Revamp the club from top to bottom.

Tbh, I think people are just making him a scapegoat. He just does what he’s told to do, but it seems people are now blaming him for lack of signings.

We have a small negotiation team because that’s how Wenger likes it (possibly the smallest negotiations team of all the top clubs). Heck, if it weren’t for Gazidis forcing his hand, our medical team would’ve remained small too, as that’s how Wenger initially wanted it; no changes to that, much like his coaching team.

You seem to know a lot about Wenger’s likes and dislikes.

Are you insinuating he makes it up as he goes along? Nah neverrrr.

This speaks volumes for the troubles behind the scenes and what is wrong with our club. Something* is very very wrong. No chance we’ll ever know what, but clearly it’s a mess.

*easily substituted for lots of things or everything

God speed, Mr Dick Law! You’ve been of great service to Arsenal Football Club. Thank you for all you’ve done for us

A law unto himself.

The law of dick.

He wouldn’t even have to change his name

I hear textbooks are using his name to help students conceptualize what is meant by a patriarchal society.

Since it’s late and I cant think.

That meant to have (insert goodbye message here incorporating some sort of dick joke) but it appears greater than and less than symbols hide text!

Hopefully Team Sky man can convince Dave Brailsford to join. He’ll soon whip us into shape definitely without the aid of any performance enhancing drugs allegedly

The worst thing about losing comedy characters from the club is we don’t get to hear them again on the Arsecast.

Shut the door on your way out you fucking useless bellend.

1 down ,3( kreonke gazidis and Wenger) to go

Has he run down the final year of his contract to leave us in a free!?

“The area that I manage is called football operations”

So by all intention and purposes, his role was as a diminished DoF in all but name.

I think the problem with the DoF role is that it simply requires more authority and power to make decision, power that Wenger will give up over his cold, dead body.

Now it doesn’t mean DoF being more powerful than the GM (although in truth, it really should, overall),but unless that fundamental balance isn’t changed somehow, or at less made equal, any replacement will just be another Dick Law-in disguise.

Abject failure its a pity the club indulged him this long…

Based on all the crap one hears about this bloke it couldn’t happen soon enough. I was hoping he’d be one of the first to go during the so called catalyst for change this summer. Beyyer late than never though.

Agree. Think all the stuff about him being popular important etc is designed to fit with the arsenal in crisis narrative. Frankly, I struggle to see how our negotiations could be handled any worse both incoming and outgoing. In saying that, im not convinced our structure will let his replacement do much better.

The closest thing this club had to a set of balls is gone. Was Dick instrumental in getting the Coq in the Arse?

He’s listed what he does, and we’re absolutely amateur when it comes to all of that. So while I hope the family reason isn’t serious good riddance

Sad that he has to step down for family reasons. That’s never easy.

Still it’s time for new blood in the transfer team and hopefully this eventually leads to our much needed Director of Football.

Arsenal need to plan for life without Wenger now and this opening is the perfect opportunity to bring in an intelligent ex-player or football executive into the DoF/GM role required at a modern club. Key thing here is the candidate has to be connected and I’m really not fussed if they don’t have any Arsenal connections. We need the best man/woman for the job. Ivan needs to concentrate on being the CEO, he has no business being at the training ground.

Now we are Dickless and Lawless…

This is the man who scouted Gilberto, managed to bring Ozil and Alexis into the club, also Koscielny. Too many people like to believe red herrings fed by the media. The Ozil transfer in particular was a bit of a coup. …remember contrary to some opinion there are 7 or 8 clubs who can afford as much as Arsenal in transfer market or more. Some of those clubs had similar requirement. Waiting to end of window was mostly bc of the Bale saga at Madrid but also helped wean off some of the potential competitors by that stage. Unfortunately it… Read more »

Mind sharing that stiff you are smoking?

Next transfer window will tell us if this is a good thing for arsenal. But I am sceptical. Best wishes and I hope the ‘family reasons’ aren’t too serious.

One more job for Wenger to do him self

Goodbye Dick and good riddance…. Let’s get David Dein back.

Moses! The CEO of a club need not be on the training ground?Where and what should he be doing? The Chelsea owner started visiting the training ground last season after we beat Chelsea 3:0 , we saw the result immediately. Most people still do not know that the problem with Arsenal is poor training by Wenger and not the players.Proof? It is very simple. All cticisms ,weaknesses in the team 8-9 years ago are still there but the players of those period are all gone ! The players we have now are internationals and ex -internationals ,World Cup , and… Read more »

Tactical rigidity due to cluelessness. I don’t know maybe I’m wrong but Pep seemed rather tactically rigid and it was praised as big team mentality because big teams IMPOSE their game on the opposition. Maybe I’m just grasping at straws

I marvel at most fans comment about Dick Law leaving Arsenal . I am not surprised at all that he is leaving .Wenger the power monger has been frustrating his efforts without anybody calling him to order. Wenger usually shut out players Dick Law has hands in bringing to Arsenal .Podolski,Joe Campbell and the last prominent one Lucas Perez.That was why Perez went to complain to Dick Law when he was being denied games.See Wenger’s comment on Perez after the F. A Cup. “He’s a top quality striker but I couldn’t give him the games he wants and deserves l… Read more »

To the list that includes Sods Law and Murphy’s Law we add Dick Law.

The law that determines that you almost get the thing you desire, but fuck it up.

Serious question how can I apply for his position

Are you a Lawyer/Solicitor?
If not, you can’t apply for the position…

Wishing him all the best in all his future endeavours.

Good riddance to bad rubbish; i wonder if it’s true, as we all know like every rumor about arsenal it’s always that “a roumour”
Won’t be surprised if this was leaked to help fans believe they should expect the promised changes and that things would be done differently next window.