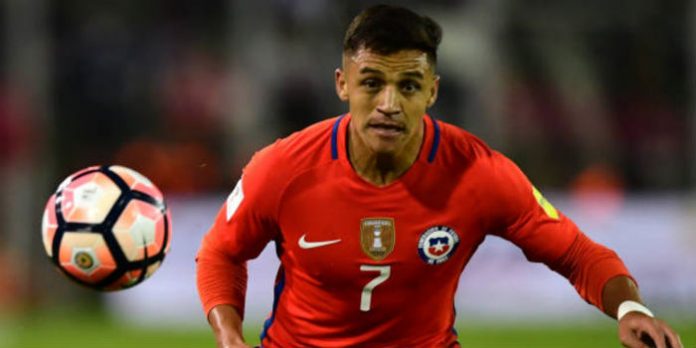 Alexis Sanchez is a major doubt for Chile’s World Cup qualifier against Bolivia on Tuesday after picking up an injury in training.

El Mercurio claims the striker required an ice pack on his left ankle following yesterday’s session and could sit out the trip to La Paz.

It’s not the first time the Chilean press have panicked about their talismanic leader only for him to make a miraculous recovery. What’s probably more worrying for them is his state of mind.

The 28-year-old was out of sorts as La Roja lost 3-0 at home against Paraguay on Thursday just hours after his proposed move to Manchester City fell through. The result leaves Chile’s chances of making next summer’s World Cup in the balance.

Whether this problem could also rule Sanchez out of Saturday’s game against Bournemouth remains to be seen.

You think it’s a good one.

Ever heard of ethics?

Let’s give up on this guy and help Iwobi to fulfil his potential.

100% This! Would love Iwobi given another proper run in the team, such a talented player and able to dribble past or play that killer pass that we seem to be lacking of late.

Iwobi is also injured at the moment

Is he out of this weekends game? I haven’t seen anything on Physio Room.

I don’t necessarily agree that we should give up on Sanchez but succession planning should begin now, be that Iwobi or otherwise.

Succession planning requires a plan…. Regardless of Sanchez’ form, like other players, he will start most games regardless. I agree we should start building now but like the Ox, we will play Sanchez week in week out hoping he signs a contract, which he won’t.

I’m a north bank season ticket holder, now going with the flow as tired of the same chats with those around me I attend the games with. Support the team. Buckle up for the ride.

Big ask, Iwobi doesn’t score lot of goals but I want the end of the Sanchez ordeal.

Iwobi IMO should be played in Ramsey’s role as deep lying. IF he can be more discipline, he has the raw attributes in physical strength, ball control and vision for the through pass. The other player we have to use now (albeit risk in injury is high) is Jack. One of these two hopefully can strike better balance with Granit (and possibly Coquelin) Ramsey’s better position is in Ozil’s. His instinct is to attack but Wenger is relying on him to restrict himself. It can only work for a while before he decides to play to his better attributes and… Read more »

Bloody hell. Turn down £60m and then give up on him. Smart move Arsenal.

Your now blaming Arsenal for following a strategy just expressed by some bloke on a website.

That is typical of the current Arsenal discussion. I do understand your frustration, but try balance your Arsenal life with a girlfriend.

Yeah… We won’t see much of him this season, can’t get injured before his career’s last big contact

At least we kept Akpom in the squad.

Not surprised he picked up an ankle injury.

He’s started the season off on the wrong foot.

How fucking convenient for him eh ? Why am innit surprised ??

If he turns into a sulking brat (not saying he will) then bench him until he goes..its not like we got CL with him playing last season. He wants to go, its obvious and I don’t blame him..its us poor fans that are stuck with arsenal in our hearts and we expect players to have the same feelings. They’re just employees at the end of the day.

And so it begins!!

We might end up regretting keeping him. Why did we leave this to the last day of the transfer window? He wanted a move, he sees his future else where forcing him to stay does is no good.

Its absolutely shocking how naive we are.

Should have just got Mahrez for 40m. We are covered regardless of whatever injury “issues” Alexis may suffer this season.

Just like we should have locked the Ox down when Gnabry was pushing for a more assured place in the squad two summers past now.

yes fake injury. should have let the piece of crap crawl back up Guardiola’s arse!!!!

You may feel that way about him but the situation has been a total cock up by this club. He wanted away because he sees no prospect of winning the league with Arsenal and he’s justified in thinking that. He should have been sold earlier in the season and replaced with a marquee signing. But as usual Wenger and co dithered and we’re left with this toxic mess.

of course he did!!!! I bet he plays and then lo and behold he is out for 6 weeks for Arsenal.
the tosser is playing games, such a shame we didn’t let the turd go to city

He may be injured for Chile? He may not? The problem we have is can we get 100%? or get him or Ozil to play with little knocks? If they want moves inside the PL? And can’t start official talks or sign contracts until next summer? Will they put that in jeopardy for the benefit of their current team? in which they want no part? I suspect no. Hopefully their more professional and dedicated than I’m giving them credit for. But I suspect human nature will kick in, and their minds will be elsewhere. This is AW’s biggest challenge in… Read more »

1st of many injuries this season?! He’s out of sorts mentally. So is Giroud. Ditto Ozil. Ditto Mustafi (bright lad, speaks 5 languages and wants to leave to cement his place in German world cup squad); Bellerin has been AWOL for some time now. Koscielny was awful last night too. I think we are in deep trouble. Gazidis emailing everyone with Trump-like ‘it’s a successful transfer window’ rubbish too – just makes me happier by the minute. hmm. there seem to be 2 Sams posting on here. I’ll be Another Sam then, although pretty sure I got there first. (Any… Read more »

Looks like a very bad season to have Alexis in your fantasy football squad.

What has Alexis said publicly? Nothing of note either before or after the window closed to my knowledge. I’ll wait till I hear what he has to say before passing judgement.

I’d be monumentally pissed off if in the summer that Alexis leaves Chile don’t qualify for a tournament, meaning he actually gets a rest and is able to have a full pre-season with another club.

Chile lost 3-0? He must be seeking a transfer to the Spanish national team now…

I’m so bored of this bloke now. Can he not go to some other club and carry on running himself into the ground while we bring in a quality player like Lemar instead?

the game I watched,Alexis played well and created goals for his team mates. They are just unfortunate not winning the game… When did Arseblog becomes this? Where is the Arseblog that I look forward reading everytime? COYG

If he doesn’t respect the contract , Arsenal should get him to court.

And so it begins….Alexis will be “injured” this season thus not giving his “100%” contrary to AW’s delusional thinking

Or just maybe….. he got kicked or twisted an ankle in training? Just saying. Maybe he’ll be just fine for Bournemouth.

Fake news! Alexis will play against Bolivia and no injuries have been informed. You have to double check your sources. Cheers.

If he already didn’t have the abdomen for our campaign.

Don’t forget the window for some other leagues remain open.

We did ourselves no Favour to hedge against risk.

If we had brought in Mahrez regardless instead of trying for the impossible with Lemar for 52m higher, we would have cover for Alexis regardless of his decision tomorrow or in January.

There’s an article in the Manchester Paper where he claims he was devastated but something about “winners are losers who just keep trying harder” and turning adversity/dissapointments into victories.

You have to love his attitude whatever the ankle injury or abdomen problem.

That’s one week in September, one in October and one in December. Hope to be back by Xmas. Complications arise in January. Should be fit for season run in. Needs an operation in April. Signs for Abu Dhabi FC in June.