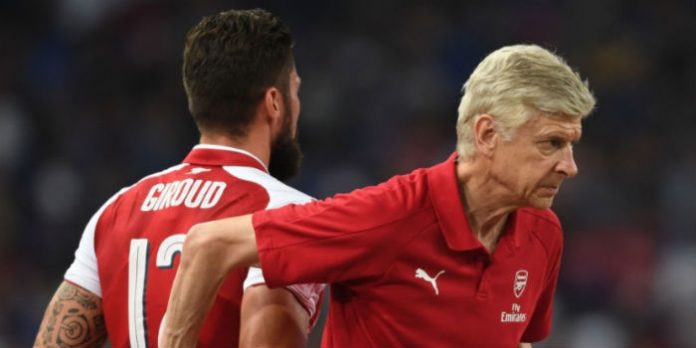 Arsene Wenger says Olivier Giroud’s contribution to Arsenal has been tremendous during his five years at the club.

The France international joined for £12 million from Montpellier in 2012 and has since made 232 appearances. His next looks likely to come against Cologne as the Gunners make their Europa League bow on Thursday night.

In his pre-game press conference, the boss was full of praise for Giroud, seated next to him, noting, “I don’t want him to feel uneasy, but I’ve said many times that his contribution has been huge.

“He has a great evolution here. Overall, the contribution to the club has been tremendous and he has shown a very loyal spirit and has a high respect from everyone inside the club and from our fans.”

The France international opted to stay at the Emirates despite additional competition for places up front and now stands just one goal shy of a century in Gunners colours. It’s a milestone he’s eager to achieve.

“Obviously for a striker it’s important to score, the statistic is very important. I keep it in a part of my mind but the most important for me is to win. After, the goals will come if we play well and play our game.

“We are very focused on this Europa League. We want to go and win it. We are ambitious. I’m looking forward to the game tomorrow.

He added: “It’s a privilege for me to play for Arsenal and to score almost 100 goals. I hope it’s going to happen as quickly as it can.”

The striker, who was heavily linked with the likes of Everton, West Ham, Marseille, Lyon and Borussia Dortmund, also touched on how close he came to leaving earlier in the summer.

“It was a private decision. It’s true that I was close to leaving the club because I said I wanted to play. After a big reflection, everybody [came] around me like my family and my close friends in a supportive way, and I wanted to stay at The Arsenal.

“I thought the story was not over and finished at Arsenal. The club bring me a lot and I think I give it back. I still want to improve and improve again and again and win some more trophies with the club.

“As I said to the boss, ‘our story is not finished.’ Everybody was pleased with that.”

Think he will fit well with Welbeck and Lacazette this season. As well as Sanchez.

According to DM, he decided to stay after a “big reflection”. Frankly, If I had his reflection I would stay the way I am too…..

Wouldn’t it be lovely if all the team had the same attitude.

The best question ever! I respect this guy alot.

Was hoping he’d get his 100th at The Emirates last weekend so I’m glad we’re at home to Cologne tomorrow.

Come On You Giroud!

We got 99 problems but Giroud ain’t one.

She too had unfinished business.

I would’ve been devoed if Giroud had left this summer. Can’t wait until he becomes part of the 100 Club.

Short for Devolutionized, I think.

Devastated? That’s what I’d have been.

Brings a tear to my eye. Top man

So refreshing to hear a footballer take decisions based on intuition, rather than overthoughts, ill-adviced reasonings.

I fully agree. There is not a better forward in the world at holding up play and his finishing since he came to Arsenal has steadily improved to where I’d truly say his finishing is world class now. His near post finishes are absolutely sublime and I think some have been overlooked, but have been incredibly deft and subtle. His touch in the box is also unrivaled among big men. Whenever he does leave I think he’ll always be fondly remembered.

He’s always been good enough. He is focused on the TEAM, not himself and that’s why I’ve always loved him!

He might just be the best offensive header of the ball in the entire world. If he’s possibly the best hold up player and best aerial threat in the entire world, on top of all his technical ability, intelligence and fighting attitude (and his Consistent goals), then I don’t know what a world-class striker is anymore

He has worked hard at it.
He has got himself leaner PLUS improved on positioning to make up for his weaknesses.

Facts. Just go read his Wikipedia page. The intro part. And tell me he’s not one of the best strikers in the world.

Great man. very loyal hope he gets that 100th goal.

Hope he goes on to get 100 more. Not going to happen, I know, but it’s more about wishing him a successful run with Arsenal going forward.

The way he calls it “The Arsenal” makes me feel all warm and happy. I hope he stays forever. Deserves legend status.

Just what is Wenger doing to him in the picture above???

99 goals in 232 games, and I bet there are a fair few assists in there too. It beggars belief that he has come in for as much stick as he has over the years. Really happy he decided to stick around.

Such loyalty from our bearded HFB is admirable in this day and age. Will be cheering long and loud when Oli scores his 100th goal for us. I feel he’s going to join the century club soon.

Would have been a bad decision to let him go if we had. The late winner against Leicester shows it best – who else in the squad can score those type of goals? I’m not sure.

Let’s not forget the great assist from cold with first touch to Ramsey to win the cup final. I have to say his stats look better these days because he’s used as an impact striker and doesn’t have to last the game out. When he starts he has generally been less effective but he provides something no other squad player does, physical presence.

He’s approaching 100 goals (1 short) for the Arsenal over his 5 seasons with us…that makes him 20 goals a season on average.

He has continuously improved himself with his movement and finishing.

Some of the lay offs he has made (particularly to Jack) have been sublime.

And the scorpion goal will be one of the Top Arsenal goals ever.

Worth noting he started that goal with a pass from our own half before bursting forward to meet the ball in the penalty box.

I’m absolutely delighted Oli is, at last, getting the appreciation he deserves, He’s immense, I love him so much.

All these numpties who keep writing him off and saying he is a second option. With Giroud, we have power and a very deft touch in front of goal. He has improved on his positioning to make up for his weakness pace and also got more lean to be lighter on his toes. I think we have two very different options at the moment up top. If we play say Welbeck and Lacazette or Alexis and Laczazette, we play more a 3-4-1-2 with two strikers higher. If we play Giroud with Alexis (or Lacazette) we play more a 3-4-2-1 with… Read more »

I hope he gets there too, he deserves it.

He’ll get a testimonial …

Only, all of the participants won’t be as handsome as HFB.