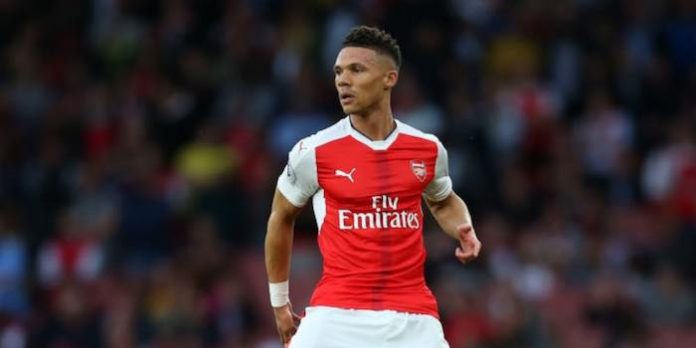 Arsene Wenger says that Kieran Gibbs departure this summer was like losing a family member, and seeing the left-back leave was more painful than the sale of Alex Oxlade-Chamberlain to Liverpool.

The 27 year old will return to the Emirates for the first time as an opposition player on Monday night when the Gunners face West Brom, and the Arsenal manager spoke about the reasons for his move.

“It was a difficult decision but on the other hand when a guy has given you so many years you have to accept that if he is not sure to play.

“It is a fact that we have got Kolasinac, you cannot keep three left-backs.”

Having been at the club since he was a teenager, Gibbs was a player close to Wenger’s heart.

“Ideally you want stability and you want players who carry the values for the generations,” he said.

“Overall it’s true that with Gibbs (it hurt) more than Chamberlain because he had been educated at Arsenal from the age of 10.

We hope he does well at West Brom, but not tomorrow night. Or he can do well tomorrow once the rest of his West Brom teammates do terribly. We’re kind like that.

Is there any truth to the rumor Gibbs wanted to leave after being promised and subsequently dropped for the fa cup final?

Good, I thought it sounded quite unlike kieran’s reputation for professionalism

Gibbs was a model pro at Arsenal. Always trained, was always ready when called up and never complained. Such a shame to see yet another Arsenal player’s career tarnished because of injury. Loved him as a player and wish him all the best starting Tuesday!

If the whole rumour is true then it’s not Gibbs that looks unprofessional, it’s Wenger

Oddly enough Blogs is probably the one person you can rely on ‘knowing it all’, for a given value of ‘all’ anyway.

Alex Benchwarmer Chamberlain. I don’t know what this guy thought while rejecting Arsenal’s money and Chelsea’s trophies (& money). He is not starting there anyway and not even going to. He looks quite average to be honest. Won’t be surprised if he is seen playing for a bottom half side in the next 2-3 years.. Don’t get me wrong, I don’t feel for Ox, I am amply amused by the fact that there do exist people who make worse decisions in life than me..

Unless you are on £120k a week as well I think he is still winning ;p

Although I am not a great fan of casually giving epithets to all previous players, I had a chuckle at Alex Benchblade Chambersub on twitter the other day.

Gibbs scores a goal and gets an assist, as Ozil and Lacazette destroy West Brom’s right side of the pitch, putting a total of 7 goals past West Brom in a 7-2 thriller. Meanwhile, Gibbs watches in horror, while internally smiling and at peace.

When will Hypothetical Arsenal ever learn to defend as a team?!

Gibbs came to Arsenal from Wimbledon when he was 15, not 10.

Gibbo is Arsenal through and through and will always be a Gunner. Immensely loved by the fans, the manager and the players so I’m sure he’ll be given a positive reception on Monday. Wish him all the best for the future and hope he makes it back into the England fold. The likes of Gibbs, Theo, Wilshere and Ox (unfortunately) were all my childhood heroes and now I wipe a tear off my eye 🙁

Unfortunate that these are your “heroes”. You should have seen the real heroes of 15-20 years ago and earlier.

You should have made yourself been born earlier so they you had different childhood heroes.

A different George
Reply to  C.B.

You should have made yourself been born earlier, in Brazil.

Looking at current Arsenal left back, backups hurts even more…

Sometimes it is better to remain silent and be thought of as a fool, than to open your mouth and remove all doubt. Arsene Wenger should really work on remaining silent.

Thanks Bob, appreciate your humour.

Fancy new quote you have there. Needs a little work on the context.

Saying nice things about a long time loyal and respectful player should never be seen as foolish.

Under Wenger Gibbs never realized his potential. Some might say due to injuries, but more rather due to poor coaching. My point had nothing to do with Gibbs but rather with Wenger and his comments.

As an overall it would be nice if Wenger remains silent, he talks too much and spouts nonsense as a given. Tell me you haven’t rolled your eyes with some of the things he says?

What potential did he have? Like every 16-19yo potential? World Class, right? Until a coaches messes it up lol

By your logic, seems you quite fancy our owner.

All the best to Gibbs.

I thought Monreal was a centre back now? Isn’t that why we have to put Maitland-Niles there in the cup games?

He has handled himself well and I really wish him well. He’s quality enough to play in the Premiership I have no animosity towards him unlike some of the others that have left or are still here (I’m talking to you Debuchy) but I hope we smash his new team to bits tomorrow.

We’ve had a number of good Academy products that have not been able to scale the heights as promised due to injuries.

Gibbs is one. Jack is another.

Currently we have another good crop coming through in Bellerin, Iwobi, Reiss Nelson not to mention Coquelin is a bit older but also unsung from the Academy. Then there is Maitland Niles who seems to slot in anywhere yet remains underrated.

Of course the unmentionable was Ashley Cole who continued our tradition of excellent leftbacks in whom Gibbs promised to keep.

Kolasinac (and the aging Monreal) buys us time to develop another.

I think we should have kept him, we need two teams and playing youngsters out of position isn’t helping their development.

I share Wenger’s sentiments on Gibbs. He really could have been one of the best LB in the world – pace, rarely got beaten 1 on 1, good recovery skills. But his off-the-ball positioning really hurt him and I was disappointed that he never could improve on that.

Yeah he was totally out of position when he headed off the line v Hull and won us the FA Cup. A very under-rated player.

He was just giving an opinion and you bring up one instance where he had a great moment? That proves his statement being wrong? lol

Watch him head two off the line v WBA … my point was he’s under-rated, not underachieving. Scored some great goals a but the final nail in his Arse* career was Nacho.

The number one loyal player at Arsenal, love the guy for life

You never really leave Arsenal when you’ve been there that long. It’s no big deal that he’s playing somewhere else. Unless he ends up at Spurs, he will always be Arsenal.