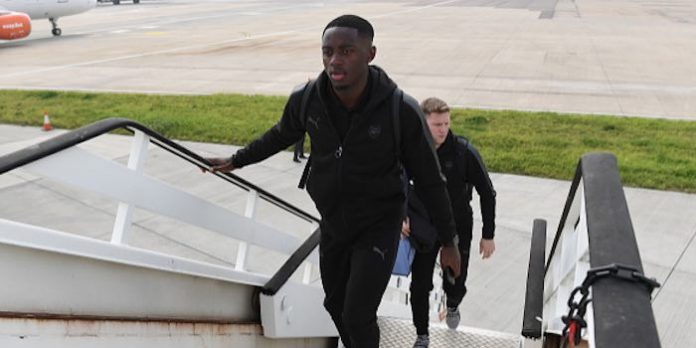 Arsene Wenger, as promised, has brought a real smattering of youth with him for tomorrow night’s Europa League tie with BATE Borisov.

The Arsenal manager has included some youngsters who have yet to make an appearance for the first team, including midfielders Charlie Gilmour – said to be very happy with his inclusion – and Romanian Vlad Dragomir.

Other youngsters on the trip include Reiss Nelson, Joe Willock, Ainsley Maitland-Niles, Matt Macey, Marcus McGuane, Josh Dasilva and Chuba Akpom, and they have all travelled to Minsk this afternoon with senior men like Per Mertesacker, David Ospina, Theo Walcott, Shkodran Mustafi, Olivier Giroud, Rob Holding and Jack Wilshere.

With a 12 noon Premier League kick off against Brighton on Sunday, the manager has left the likes of Laurent Koscielny, Aaron Ramsey, Mesut Ozil, Alexis Sanchez, Granit Xhaka and Alexandre Lacazette behind to have some fresh legs for that one.

James from Gunnerblog has given us his starting XI – what team would you pick?

Yes for the Romanian! I want to see Vlad in action!!

Hoping he impales whichever defender he’s up against.

Decent, but I’d really prefer to see Nelson further forward and not RWB. The problem, like Blogs has said, is there’s no cover for the wingbacks.

We could just play that forgotten french fella Debuchy.
I know he’s frozen out of the squad, but I’d prefer an actually RB in RWB rather than wasting Nelson as a WB (I think Nelson as a WB is gonna be my new Ox as a LWB petpeeve).

Also, Niles should not be a LWB. I’d rather just play Da Silva there.

No Jeff?
Godamn, had high hopes for him, still do actually…

Yes who cares if he’s injured. Just play him to satisfy your needs.

Only one Dennis Bergkamp

What’s with The Jeff? Don’t see him anywhere these days.

Gus Caesar
Reply to  Only one Dennis Bergkamp

But what about the Jeff? Nobody mentions him these days.

Injured. See his ArsenalFanTV interview at the FIFA ’18 launch party. Nice little interviews with Reiss and Chuba there as well.

Hopefully we can master BATE on Thursday. Don’t underestimate them! They have a rigid defense and are a well oiled side.

At least you tried.

I hope you made yourself happy with that one.

The need to rotate the squad probably means we’ll be using our coq to master BATE.

but we can´t master BATE with an injured coq

You must be fun at parties

Finally we get Vlad dragomir. I really really hope he becomes a first team player, what a great name!

BATE Borisov are not exactly push overs; it could turn out to be a very dicey game for that team, especially if we need to rely on the subs bench for injuries or tactical change.

How about Wenger fields a 4-3-3 system with AMN at right back and Reiss in midfield ?

Good call! 4 at the back (with experienced CBs) should be more than enough.

Let me get this straight…we have a guy named VLAD DRAGOMIR, in our side. And he’s Romanian?!

Dracula…we’ve got friggin’ Dracula!! How cool is that?

I think we should go with a back 4 in this game.
Ospina
Mustafi Per Holding AMN
Wilshere ElNeny Willock
Nelson Giru Theo

This looks like a decent side to me. Thoughts?

So, how to master BATE Borisov… Anyone have Michael Gove’s number?

Surprised there isn’t Ozil on the list. Must be still worried about his injury.

Sub off Bellerin, move Chambers to RBack and Holding into the middle later on.

Chambers is injured, has a small recurrence of hip problem

Where’s the Jeff? What happened to him?!

Injured, but coming back soon. Interview at FIFA ’18 Launch Party with Arsenal FanTV on youtube

He was on a delayed transfer, he was make weight for Xhaka last summer

I love these kind of games….Just like our first team the ‘mixed’ teams are always either delightful or terrible….But in even more entertaining ways.