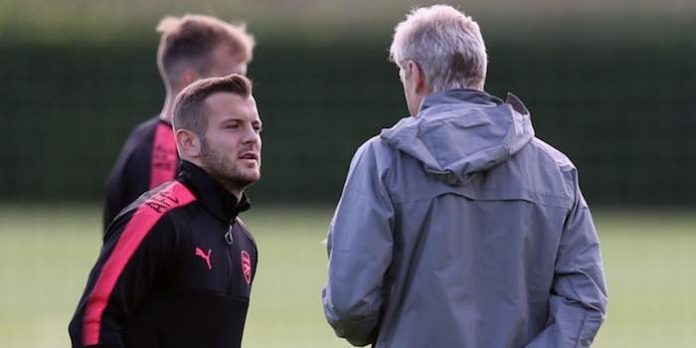 Arsene Wenger says Jack Wilshere is showing positive signs in training, and is hopeful he can make a contribution to the season ahead, but insists it’s all about keeping fit.

The midfielder hasn’t started a game for the Gunners since May 2016, a 4-0 win over Aston Villa on the final day of the season, and is still on the way back from yet another injury – sustained at the end of last season when he was on loan at Bournemouth.

Wilshere is in contention to come into the side as Wenger rotates his squad ahead of Sunday’s Premier League clash with Chelsea, and while cautious is hopeful he can rediscover something close to his best.

“If you have seen the video of when he played against Barcelona, you know what his game is about,” he said.

“Jack is very hungry and very determined. He is also not completely at his best but he is getting there every week. I think he enjoys being back and enjoys competing for his place. What I see in training is positive.”

“When he began his rehab I was on tour with the club but since I came back I have observed him more. I know Jack well enough; he analyses every training session to see how he has done.

“He has a football brain, you don’t need to tell him much on that front, but I speak to him of course about how I see his evolution.”

It’s the injuries that have been his downfall more than anything else, and his future remains unclear as he’s in the final year of his contract, but maybe there’s a chance for him to secure a new deal if he can impress when given the chance.

“if he can impress when given the chance” – man, I hope he does.

Me too. One of the few players in the squad who can connect with fans and bring some atmosphere back. He’s not just Arsenal DNA but a heck of a player too. A complete midfielder, dribbling, passing, vision, grit, the bursts of his that Wenger is such a fan of, are not just a rare quality that brings chaos in the opposition defense.
I will pray and hope he makes it this year and makes it here. I have accepted it as his last chance. We got nothing to lose, he’s out next summer anyway.

Nelson assist, and Wilshere brace with a sprinkling of Sanchez trickery will be a perfect night for me.

I would love him to come back and be a success with us.

Any theories about why he was such a flop at Bournemouth?

Unless he has lost the spark he had then I hope he can get back.

was he a flop? he has lesser players around him so less freedom in his ability within his role? certainly no flop

Hope you’re right, that it’s down to having inferior players around him, but I was hoping he was going to boss that team.

Kante is a completely different type of player. Comparing the two is either misleading or ignorant.

You might as well argue that Cech scored no goals either.

A different George
Reply to  SpamB0t

I’m not comparing the 2 players jut proving that statistics don’t always prove anything. He was their best midfielder and was highly regarded at the club and played most games. To call him a flop is total nonsense.

Stats are good, but using them to call his time at bmouth a flop isn’t right. How many of his games did you watch? He was consistently being rated highly in newspaper ratings among his teammates.

His style of play generally means he’s only as good as the players around him… he was playing with Fabregas, Nasri and Arshavin when he shone against Barcalona in 2011 but spent last season with plodders Surinam and Arter.

Wasn’t a flop, that was a media invention. He was their best midfielder and you can see how they’re missing him now.

Also a little unlucky statistically
– hit the woodwork 5 times, joint third most in the league and the players hitting it more took a lot more shots.
– Recorded the highest number of key passes in the team but ranked only 7th for assists, which is what people tend to talk about. Benik Afobe in particular missed the second most big chances in the league, many of which would have been setup by Wilshere.

No theories because he wasn’t a flop. He played in most of their matches.

My Bournemouth supporting mate tells me that he wasn’t a ‘flop’. He says Jack was their best player and made them tick. Without him they didn’t play with the same fluidity that they had when he played.

There was also an Injury in the second half of the season, but if you want to keep dissing the player keep going tired of this bs.

You can’t have a conversation with someone who only looks at final stat lines like goals scored and assist. The game is much more then those 2 stats alone.

He was out injured with a leg fracture for the last five games and started the three games prior to that (big games against Liverpool, Spurs and Chelsea).

The only game he was available for but didn’t play was against Manchester United, which may have been partly due to a little knock he picked up against Man City a couple of games earlier.

But without him they won.

Without who?
Who won what?

Everyone wants jack to succeed at arsenal. It’s all down to him now.

Let’s pray his body doesn’t let him down

ok. I will also support this contract rebel running his contract down.
so many will be on view tonight. Debuchy, jack, alexis…

I’ve been trying to find my little burst for years

Big game for Wilshere tonight. I have a feeling he’ll combine well with Mo.

Come on Jack we need your fight in this team!

A look into the crystal ball and what will tonight’s game bring? a 4-1 scoreline perhaps?

Against one of the better sides in the Bundesliga? Doubt it. We could conceivably lose this game emphatically if we don’t take it seriously.

They are dead last in their league after 3 matches after losing their best player(Modeste) over the summer. So 4-1 would be a fair prediction if the real Arsenal turn up.

That’s true of nearly every game. Köln are a decent side but they’re struggling to cope with the loss of Anthony Modeste up front, and while they’ll likely sit back I don’t think the big pitch at the Emirates will suit them. This is also their first European match this century.

We should win without too much trouble as long as we stay focused.

lol, one of the better sides, they are bottom of the league

We were in the bottom 5 till the Bournemouth game. What is your point?

1, if they are bottom of the league how can they be one of the better teams. 2,we WERE in the bottom five, but NOT bottom, and now we mid table….understand…..

Nachos in Montreal
Reply to  ronaldo

Because,my friend, your argument around them being crap revolves around their table position-a really,really bad indicator 4 games into the season.

ronaldo
Reply to  Nachos in Montreal

Errr, what more evidence do you need, they are bottom of the table, WHY do think that is, and as I said other people think they are crap, but they get thumbs up, please explain….

oi wenger, he never lost it

I hope he plays tonight and shows us he’s not finished yet!

Come on show us what you are all about Jacky boy!! Can’t wait to see your passion on Arsenal shirt once again

“He is also not completely at his best but he is getting there every week. ”

Doesn’t sound like Jack will be in the staring XI tonight.

In terms of being in the final yr of his contract, do we gamble that he would do well and give him an extension sooner rather than later. Or do we wait for him to prove himself, risk him asking for a lot/leaving on a free!

A little bit difficult choice for the club and Wilshire.

I say we wait.

Wilshere needs to find his little burst? Could have gone up in smoke!

Wilshere is a flop, in between the no. 6 of the ngolo kante, pogba, fabregas, xhaka, wilishere is one guy arsenal needs to cut its losses on, a new manager is needed at arsenal to clear out the likes of wilishere, perenial underachievers

I think it speaks volumes that Wenger has to go all the way to “the Barcelona game” to find an example of when Jack played well.

He hasn’t really set the world on fire in the 6 (SIX) years since, now has he?

Its easy for AW to use that as a reference because that was a huge game that we as Arsenal fans can all remember. To bring up some random Prem game over the last 6 years is pointless to the statement about Jack he was trying to make.

“If you have seen the video of when he played against Barcelona, you know what his game is about”

Too bad that was so many years ago, and Wilshere hasn’t grown as a player at all – It seems like he even took a few steps back…

It seems like his main problem is that his style of play of getting into tackles he probably can’t win, combined with his tendency to get injured A LOT.

I am rooting so hard for Jack. At Arsenal preferably but anywhere. I’m gonna throw a party when he starts playing again.

I had a dream once that he and Diaby anchored our midfield….

we could have really done with wislhere when santi gotn injured last season. i keep wondering whether that could have been his chance to really put his mark down on this team. hope he gets another this year and i hope he actually wants to stay here

My biggest concern comes from a recent Tactics column on the blog where Tim Stillman (I think) pointed out how Jack’s extreme one-footedness means he regularly exposes his ankle to injures when he twists to play the ball in close quarters. I had never thought of this; if it’s true, then at least some of Jack’s injuries are not just bad luck, and are likely to be repeated.

But, boy, I love to watch him play.

PaulS
Reply to  A different George

Yeah, I think people like to come up with rationalisations like that rather than accept that sometimes shit happens.

Messi plays with an equally one-footed twisting, turning style and is challenged and fouled a lot but has never had a long-term injury.

Nachos in Montreal
Reply to  PaulS

Alexis does this too.Ive seen him cross from the left wing with his right foot WITHOUT cutting in

I guess it’s safe to say most Arsenal fans watch that Jack vs Barcelona video once a month. Apparently, that includes Wenger.

Not expecting too much but if he does kick into gear, his ability is never in question.