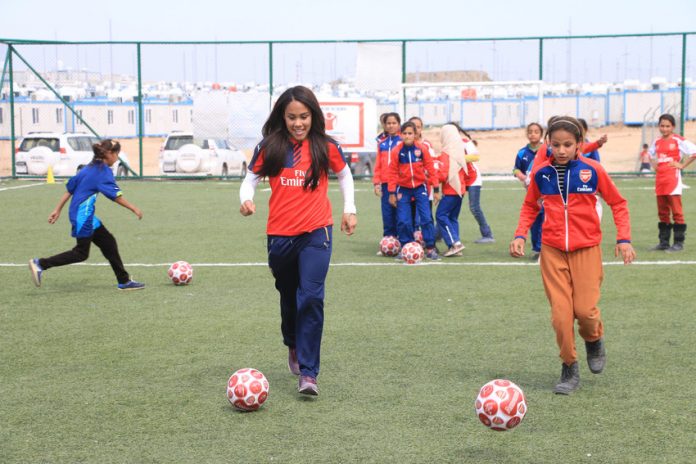 Arsenal right-back and captain Alex Scott has announced that this will be her last season with the club. Scott confirmed the decision during the Sunday Times Sportswomen of the Year awards ceremony on Thursday evening.

Alex Scott announces this will be her last season with Arsenal. Doesn't specify retirement, but broadcasting career has taken off. pic.twitter.com/ezCipnQbhk

Scott very nearly elected to leave the club this summer to focus on her burgeoning broadcasting career, but was persuaded to sign a one year contract. She did, however, retire from international duty following Euro 2017.

Scott’s announcement is not a surprise, but follows hot on the heels of manager Pedro Losa leaving the club earlier this week. Scott will be required at right-back this weekend, with Swedish full-back Jessica Samuelsson picking up a foot injury on international duty.

Scott joined the club when she was 8 years old. She had spells at Birmingham City and with Boston Breakers in the US before returning to Arsenal in 2012. She scored the winning goal when Arsenal won the Women’s EUFA Cup (now the Women’s Champions League) in 2007.

Arsenal play away at Everton Ladies at 2pm on Sunday and the game will be streamed live on FAWSL’s Facebook page.

Alex Scott is definitely one of my favourite players. Shame to see her leave. Do you think she’ll get a testimonial Tim?

Great player. Losing her will feel like the end of an era.

I know she does bits for Arsenal Player and I’ve seen her as a pundit occasionally, but are there other things in broadcasting she’s doing that I don’t see (haven’t got Sky/BT)? I’m just interested by the whole “broadcasting career has taken off” thing.

She has a semi regular match day slot for Soccer AM on Sky and has recently presented features/interviews for Match of the Day/Football Focus branded BBC stuff. She used to also present for London Live and I think she’s done non-punditry things for the Premier League’s own branded TV content(I’m assuming for international broadcast).

We’ll probably see much more of her next year.

She works for BBC’s Final Score programme, has a presenting slot on MOTD Extra and a weekly slot on Soccer AM.

Ah, OK. Thanks Tim. Don’t watch any of them, so didn’t realise. Nice to see she’s doing well for herself, as she seems a very nice (and down to earth) person.

Be sad to see her go, hopefully she makes big strides in her media career – she’s very natural on camera, far more so than many ex-footballers who have crafted careers for themselves as pundits or broadcasters.

I would have loved the club to hang on to her in some capacity, however I suspect bigger things are ahead for her.

Why does the picture look like it was taken somewhere in the Middle East??

Nvm, this definitely is from the middle East, in guessing somewhere in the UAE perhaps. The sand in the background, the two white Prados, the cloudless sky, all dead giveaways.

It was taken in Iraq

Was taken in an Iraqi refugee camp. Arsenal did some work with Save the Children last year where they built pitches and sent coaches out. I can’t post the link but it’s one of the nicer things the club has done recently

Further to my comments on the Pedro losa article, this is going to be a testing transition for Arsenal Women.

It’s so rare to have players as loyal as fans nowadays.

I want to marry her lol

Why the hating. Shes a gunner and im a gunner. Shes beautiful so il be the happiest man alive lol

I don’t think you’d be her type. Let’s leave it at that.

She’s black and a women she fit the diversity need for BBC and sky quite nicely. why do you think Rachel got soccer Friday she was terrible and didn’t know a thing about football.

Who is Rachel and what is Soccer Friday?

Alex Scott is one of English women’s football’s most recognised faces, has over 100 national caps, is knowledgeable, articulate and unbiased in her coverage.
Not sure what anything else has to do with it.