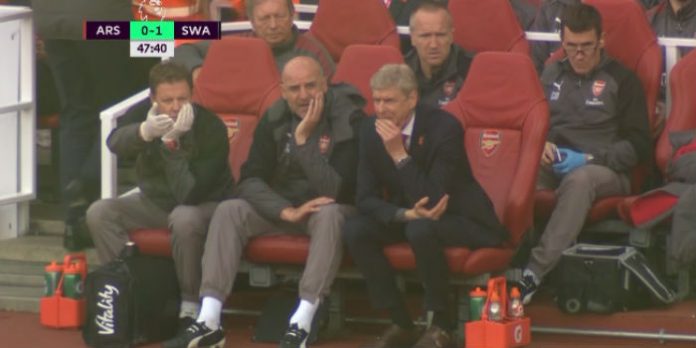 I have three more datasets I’ve come up with that I will post either here or on my blog: an average of all the top strikers in the top five European leagues (finishing %s, shots per season, minutes, goals, etc); a look at Arsenal’s spend (total and transfers) relative to the points earned (per Gazidis’ comment that Arsenal are the best at that – hint: they aren’t); and I have to give a weekly roundup of my xG and shots saved stats (hint: Cech is not doing well this season, folks). Look for those three articles this week.

Happy with the win, hope to end mistakes, though.

We seem too vulnerable at the back – too many mistakes. A more ruthless performance by the opponents and we’ll again concede 3 or 4. I hope we keep our discipline, just like Chelsea against City.

A good comeback again, though. Kola is a beast. Hope he recovers.

I think a lot of the criticism for Xhaka comes from the situation in which he loses the ball, and this isn’t particularly well covered by stats. For example, losing the ball with the whole team back in your half is probably ok, but losing it to an opposition’s striker with just the centre-backs to beat is really bad. It just seems like he doesn’t read the danger of situations well and lingers on the ball far too long when he should really release it or at least put his foot through it.

Yeh, though I didn’t always observe this there was one point where Xhaka received the ball and two or three Swansea players charged at him. He will have to learn to think about what he wants to do before he receives the ball. He did well in the second half and without him we wouldn’t have been able to switch play as effectively. Swansea looked dangerous on the break with the pace of Abraham but when you lack pace in the defensive centre of the pitch (Xhaka and BFG) it’s even worse. Mustafi or Holding would do better to snuff… Read more »

Teams are doing this. Liverpool rushed him and resulted in goal, Everton did the same resulted in goal. Opposition managers know he doesn’t have a midfield partner near him to pass to. He has no easy pass. We will get undone again for sure.

Agreed, at times it feels like Xhaka is that one kid in the playground that learnt to pass whilst everyone else just screams rush and leaves him all alone hoping for the best.

I think you hit the nail on the head.. Given space and time he shines and delivers laserguided projectiles .. Close him down and , anything can happen. He needs a screen or we need another outlet or tactical option when the game is played in a certain way.

Really want to see what AMN is made of as a DM.

Thanks for that comment on this thread. Anything else you would like to add that you want to see from other players?

No sir.
Please, tell me what I can or can’t talk about in Arsenal-related threads, in our Geoege Orwell-esque Arsenal world.

The thread was about Xhaka. If you wanted to come up with your own ideas who you want to see and why then you could have started your own separate thread.

In fact, BFG is exactly what we need for the Manc game. Manc won’t have so many bodies behind the ball and we won’t be having so many up the field, which means we need positional discipline and a calm head. Mustafi would put in a stupid tackle in the box and against a top side, chances of conceding a penalty is more, particularly with Sane and Sterling around.

lol i wonder how Lacazette must be feeling towards Xhaka after seeing him ping all them balls for Alexis ?, hopefully they can build a partnership soon!!

% of Bellerin’s passes forward and accurate?

Can’t believe how poor he’s been this season.

Fascinating, as always. Thanks!

I still feel the gunners attack is too slow and could be caught
by a fast counter team like MC . It may work against Swansea but
it remains to be seen when facing the top teams.

If you noticed how often our backs, Nacho or Kos, were in the opposition area leaving just two back or even just BFG on occasion then ManCiteh game is a real worry. They will seek to target the interception and spring forward in numbers and top pace.

Our back 3 have to accept that they are defenders and not go seeking glory until the game is won unless we have defensive midfielders to cover them.

While this worried me too, I then saw the possession stat at some point was something like 78% in our favour. If teams are happy to let our defence just pass to each other then they may as well join the attack.

That’s the way Wenger wants our backs to play, though. Obviously, Mustafi was brought here because of such abilities.

Could do with taking more shots by the sounds of it. Unless the guy ahead of us are taking potshots from distance and never scoring. Another interesting article.

Thanks for this.. raises thoughts . Now for a rant. Since Cech came I must say I have been impressed by him.. But that’s me talking about the person Cech .. and his manner and experience . He has a stature that is captain like and of offered more consistency and calm to his defenders than Ospina. However I think he has been rather average when it comes to pure goalkeeping and he has been on a decline ever since the assault he suffered. I really do not understand the decision of the club to keep hanging on to Ospina… Read more »

Regarding Xhaka I now have mixed feelings for him.. If you look at his overall game I see improvements in his ability to cover space and get into tackles and close down players at the same time the number of mistakes he makes on rather simple passes has gone up although today’s stats actually suggest an improvement from recent games, my perception was that he mis hit quite a few easy ones .