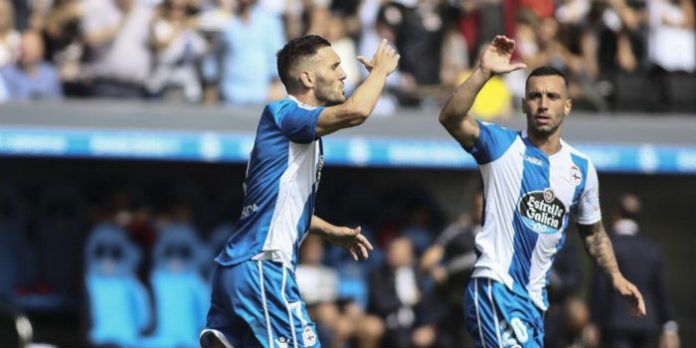 Deportivo La Coruna have confirmed that Lucas Perez suffered a thigh injury in the recent 2-1 win over Getafe and is facing a spell out of action.

The striker, who is on loan from Arsenal for the season, scored a 66th-minute equaliser and completed the game but has been unable to train since.

A statement on Deportivo’s official website, reads: “Lucas Pérez underwent several medical tests these past few days to determine the exact extent of the pain due to the injury he suffered during the match against Getafe, that has prevented him from training normally this week.

“Real Club Deportivo’s Medical Staff have verified that the Coruña striker has a significant contusion in his left quadriceps, that has caused a haematoma in the crural muscle.

“The Branquiazul striker will receive physiotherapy treatment until the bruising heals.”

From what we’ve read, it appears this type of problem tends to stem from a severe impact on the thigh. We’re not sure how long he’s likely to be sidelined, a few weeks perhaps, but he’ll no doubt be desperate to get back into action having opened his account for the season.

Wish him fast recovery but still think we should hav sold him this summer given lack of trust the manager has in him and his declining martket value as he crosses 30.

Not sure that there was an offer that Wenger deemed “acceptable”.

He did not want to look foolish by accepting an offer that was almost half of what he had paid the previous year.

Will a year less on his contract and a year past 30 gonna improve that?

There is no real market for this guy.

I\'m Professor Ignorance, on this subject
Reply to  caligunner

They turned down, what, 10-12 million from Deportivo, only to loan him back there for less. Other teams were also willing to pay around that amount. Lack of a market is not an explanation. Rather, the only explanation that makes sense is Arsene is hoping the crazy prices from this season will be even crazier next year, so he’ll have a better chance to sell him for a face-saving 17 mil or whatever despite the player being objectively less valuable.

Andre Kelley
Reply to  I\'m Professor Ignorance, on this subject

I never looked at it this way but facing higher inflation it really makes sense to hold an asset instead of selling it, considering we already have a big cash surplus. Thanks Professor!

In absolute $$$ values it’s probably worse off to keep him on the books, but there is the moral hazard factor to consider. It’s nice that Arsenal have some cash in the bank, but if they were ready to pay (or be ready to lose) some 30% extra on top of what we already have to put up with (PL pricing, etc.) at each and every transfer, they’d be happy to have enough money for a Kyle Walker next year. Look at MU; they were happily throwing their money around on mediocre talent and now they had to pay some… Read more »

Sounds like just a badly corked thigh. Corkies hurt like hell but shouldn’t be more than a week or so. I may be wrong though

He’s pretty used to being on the bench from last season.

But hopes he comes off it soon.

Poor Lucas He doesn’t seem to be very lucky.

Well, he is a professional footballer, gets payed millions every year for playing the game he loves. Some might think he’s a lucky guy.

Lucky… Extremely talented and hard working… Either one

“Real Club Deportivo’s Medical Staff have verified that the Coruña striker has a significant contusion in his left quadriceps, that has caused a haematoma in the crural muscle.”

I cut across someone when going for a 50-50 ball in five-a-side recently and my knee accidently caught him squarely in between the two main thigh muscles….poor bloke went straight to hospital :/ couldn’t play for a good few weeks.

Get well soon and come back strong.being sidelines is not good for you

Hope he recovers quickly, but this isn’t news for us.

Perez with Deportivo, Campbell with Betis. Both need permanent deals. Very decent players Difference being Campbell we bought young (still only 25yrs) and cheap at 1.5m Perez we plumped for a bit more ready made experience and capability at 28yrs and at a far higher price at 17m With Perez, if we can recoup 13m, 4-5m is exceptable loss. But he is getting older and an injury issue may drop price further. Still the market if it remains over heated, you’d think he is a good steal even at 13m mark. Hopefully this is a small issue and he can… Read more »

Had clubs willing to pay us a fee, but got bullied by Deportivo and Perez into allowing him to go out on loan to his chosen destination.
Just another example of how weak we are.

You mean after we shit on his career?

*shat
**actually, I’m not sure, can shit be used a past tense verb?

Any news on the ox?
How’s he getting On?

He’s selecting himself as CM on FIFA 18 as we speak.

Just a quick Update: Not only has Iwobi’s Nigeria qualified for the world cup, but just a while ago Mohammed ElNeny’s Egypt qualified!
2-0 to the Arsenal

“this type of problem tends to stem from a severe impact on the thigh.”

Odd. I must have missed the transfer of Charlie Adam to Getafe.