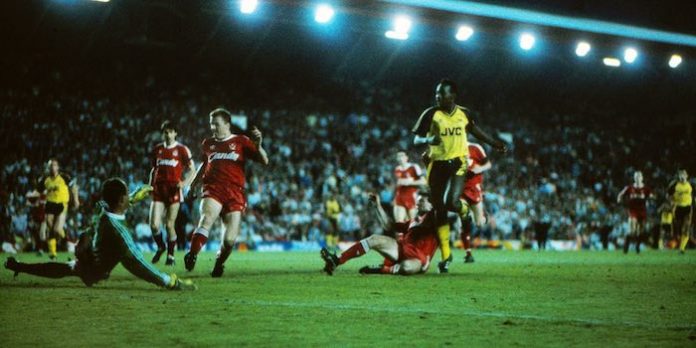 No doubt many of you have heard about this before now, but there’s a brand new documentary coming very soon reliving and re-enjoying the epic title win of 1989 when the Gunners had to go Anfield and win by two clear goals.

There are interviews with all the key protagonists, behind the scenes footage and information, and a wealth of Arsenal related title-winning goodness, this is going to be one on everybody’s to-watch list.

And with great people like Amy Lawrence and Lee Dixon involved in the making and production of it, you know it’s gonna be good.

The trailer has just been made public, check it out below, and the film is released on Blu-Ray, DVD and digital download on 20 November.

Sadly there wasn’t enough time to interview the 97,000 Arsenal fans who were at Anfield that day, but it still looks like a cracker.

Looks great! I was 5! Looking forward to catching up on my Arsenal history.

Still my best moment watching sport ever! Much better than Joel Stransky’s last minute drop goal to win the Rugby World Cup in 1995

Still the greatest night of my life. I will be having this on a permanent loop.

Still sends shivers down my spine every time….remember my dad bought everyone in some bar in Belgium free drinks all night…despite being skint 😀

Thumb up if you were there. Thumb down if like me you went to the only pub for miles around only to find it wasn’t on and you actually found out the result when you got home via Ceefax…

What do I do if it happened before I was born? ?

Watched it live on TV in Dunedin, New Zealand. First time I saw Arsenal win the league. Without doubt the greatest moment of my Arsenal-supporting life. Nothing will ever touch it.

I was watching it just up the road in Christchurch NZ. there must’ve been a gooner (who deserves a knighthood!) working at TVNZ who decided to show match live cos we never usually got live footy apart from fa cup finals in NZ. what a great match!!

I remember my Dad watching it in Dunedin too. I was only 5 and I thiiink the next time Arsenal were on telly in NZ was the 1993 FA cup final and replay

Definitely remember watching both of those

I was one of the lucky few, still have my ticket and newspaper cuttings in a scrapbook, without doubt the greatest climax to a top flight football season ever. #it’s up for grabs now…THOMAS!!!!!!!

I grew up in Jugoslavia and after the war broke out, my grandfather would play a record of this match commentary nearly every day. I barely spoke English at the time, but damn if it didn’t make me fall in love with Arsenal.

Really? A record of the match commentary?! That’s amazing. . . wow!

I get overwhelmed with emotion watching Anfield 89 videos. It’s odd because I was 4 years old, from the US, and didn’t start supporting Arsenal until 2008. I love this club and it’s history.

I was recovering from a spiral fracture all the way down my left fibula and ripped tendons in my ankle (suffered while playing football, that damned game) so I was able to watch it on the telly and it was the best day of my life after my wedding day!!!!! Nobody gave us a chance except G.Graham who drummed it into the boys that they were more than capable of winning the league. The scousers have never been the same since that night and that just makes it sweeter!

Just moved into a new flat, no furniture at all, tv sitting on a cardboard box in the corner. Time stood still when Micky got the ball. Magic.
Best house warming ever.

i am 53, when this happened i was 25. i had started watching arsenal in the early 70s just after the Mee Double year, collectively the years 73-89 were probably the worst sustained period in the clubs history, standing on an empty North Bank or in a half empty “Schoolboys”, id nearly seen us relegated twice and also seen one of the dullest teams in history the Howe side. Meanwhile Liverpool seemed to win the league every year i simply didnt know that what happened that night was even possible. In fact around that time there was no guarantee we… Read more »

That was brilliant. Well worth the time to read

I’m 52 and missed only 1 home game that season. That night was one of the few times I have cried over football… what a special night!

and apologies for the grammar. not enough commas, was rushing!

I was 10. Threw a hissy fit as my dad wanted me to go to scouts. As I remember it the night was good, then tense, then fucking horrible, then as others have said, one of the best sporting moments of my life.

Why’s this on an Arsenal blog?!? Everyone know’s Arsenal didn’t come into existence until 1996 when Arsene Wenger “built” the club!!

Poor joke I know, but Anfield 89 is still the clubs most exhilarating, enjoyable and emotional night and despite what Wenger would have you believe the start of the Arsenal era we know now.

I watched it at home in North London it feels like it was yesterday. The best sporting moment any fan can have.

I remember now, I said to my girlfriend with two minutes to go “well at least we outplayed them even if we didn’t get the two goals needed”…and then….fucking hell what a moment, and waiting another two minutes for the whistle to go was the longest two minutes of my life!

I was just a two year old Nigerian kid(Nigerians probably don’t have access to PL then). Each time i read comments about this game, i get goosebumps. I can only imagine the people lucky enough to see this game live, chaos, utter chaos. That said, i think this game got us some haters since then(was the FA pissed at us winning?), few Liverpool legends seem to hate us till date. Finally, why is Paul Merson in this trailer? COYG!

That was Merce taking the ball down the left wing leading up to the winning goal. I think that’s why he is in it!

It wasn’t Premier League. It was the First Division.

Ok I accept I shed a tear watching this even though I was like 1 year old when we won the league in ’89. There is just something unique about Arsenal F.C.. I am sure every fan feels the same about their team but there is something magic about Arsenal. Even if we are not the best team by any stretch of imagination in Europe or England, we have a certain class.

So we joined the DVD league? ;p

And of course, the matchless brian moore. My personal all time favourite commentator of all time. Sunday afternoons watching ‘the big match’ on itv. Halogen days.

Someone can correct me if I’m wrong, but I seem to recall Brian Moore uttering the phrase “Adams, pumping it long” quite a lot back in the early ’90s when ITV was showing our Cup Winners’ Cup campaigns. Ah, heady days…

Was this the start of Friday night football? The game timing will certainly not happen like this again.
It definitely seemed Mission Impossible at the time.

For someone with such a crap memory that was a night I will never forget. I worked nights for Safeway’s at the time and live matches on the tv were very very rare. I got into work for 7pm my manager said it was nice to see me in so early. I then proceeded to go and get some beers grab a stool and tell him I won’t be in till 10 o’clock. Armed with my beers, a stool and my Sinclair pocket tv probably with only a 1 inch screen I went to the top of the multi storey… Read more »

have to wait a whole month plus 8 days to watch? i have tears down my face EVERY time i watch ‘fever pitch’ & the commentary from that match in the movie. arsenal supporter since 2001 but a competitive mf since 1975.

Aw fuck, I teared up just watching the trailer….

Fairytale! Collapsed on the lounge floor screaming and gasping. Real Gooners will remember that Kevin Richardson was the second heartbeat in that side next to the god that was Tony Adams. Such as underrated player in that team’s success.

The greatest Arsenal moment. The greatest football moment. Forget Ageuirro. I was 35, when Thomas scored I jumped into the air and smashed the lampshade on the ceiling. I then drove 60 miles to celebrate with my Dad and brother. I’m glad I experienced that in my lifetime and thank you to all the players involved, and George Graham and his staff.