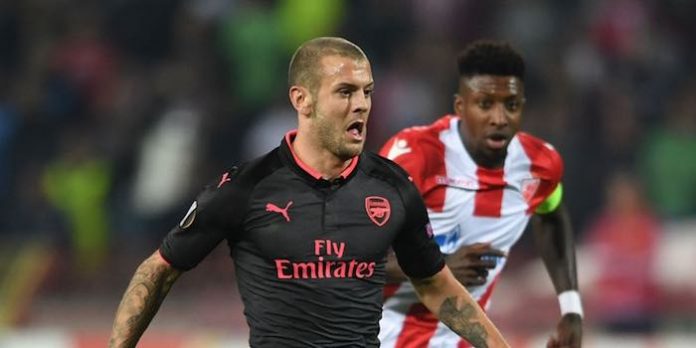 After another eye-catching Europa League display, there are calls for Jack Wilshere to be considered for Premier League action again.

The midfielder has made four appearances so far this season – playing the full 90 minutes three times as he makes his way back from a broken leg – and given the team’s options in the centre of the park it’s understandable that fans want to see his craft and graft on a more regular basis.

It’s clear that Arsene Wenger is easing him back into action, cautious of not overdoing it and risking a setback, but the 25 year is making it more and more difficult for the manager to ignore him.

Speaking after last night’s 1-0 win over Red Star Belgrade, Wenger said, “He will get a chance in the Premier League, don’t worry about that.

“I think at the moment it’s going like that. He got a big kick in the first half on his ankle but he managed to get through the 90 minutes and games of that intensity will, of course, help him a lot.”

To  be fair, Wenger is often criticised for risking players to injury, so his desire to be sensible with Wilshere is understandable. However, you can also see why people would like to see him fit enough to play in the Premier League as he does have qualities which prove very useful.

Last night was another step on the road to full fitness, so let’s see how it informs team selection this weekend.

For more on Wilshere, the Europa League and Sunday’s trip to Everton, check out today’s Arsecast

the time is now

Sorry, didn’t catch that. Sing it back?

There should be numerous changes to our starting 11 for Sunday, including Jack starting, there must be consequences for failing to win a PL away fixture so far this season and losing last time out to Watford.

True! Nothing like working to death a young growing body

Compare that with mbappe at Monaco last year. Regularly rested

Both seem to come around about once a year har har.

about the effing time.

The Wilshere Giroud Walcott combo needs a chance in the premier league.

Nooo! That’s stretching it too far. Walcott is a near total waste of space – should have been long gone before that last contract extension!

Off topic, I hope Koeman is still in the Everton manager till we play them. Just so we don’t face a team playing under an interim manager, which often makes the team more determined to get a result. They seemed quite physical in the game last night (admittedly I’m basing this on only the hightlights). We have enough injury problems already.

Koeman has a habit of beating Wenger.

I suspected Watford would beat us and I’m sure Everton will too. It’s all going wrong for koeman at present but he beats aw as he knows how to set up against him

On the evidence of his last three games, he deserves a chance in that midfield. He may not pull up trees every game – will certainly have some dodgy ones, but there is no strong argument against him if the displays of Xhaka, Elneny and Ozil are anything to go by.

I agree. Xhaka has been a big disappointment so far this season.

I think we all know that Elneny and Coq are squad players and useful in a limited way. But I was expecting Xhaka to really dominate that central area. Instead he just looks vulnerable and one dimensional, only effective when he has loads of space and time for his long range passing.

Time to mix it up. Maybe some time on the bench will do him good in the long run…

We rarely drop players playing badly. We like to play them back into form

Wilshere will help in a creative sense and with attacking transitions but we still have a problem with winning the ball back in midfield. Jack’s a good tackler and can press but he’s no true DM, he’d need someone alongside him who’s more defensive and we don’t have many options. Alternatively we could put another body in midfield but that requires a formation change.

Jack+Coq is the closest thing we have to Coqzorla in the current squad (plus they know each other’s games inside-out from their youth days). Worth a shot (though Coq is limited, and still looks rusty).

Interesting suggestion. Would prefer it was tested in Europa/one of the other cups first