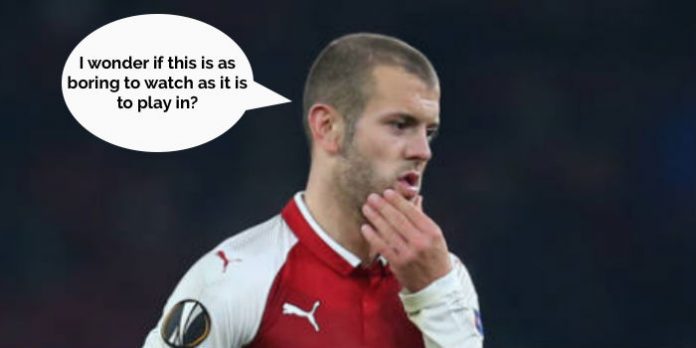 Arsenal qualified for the knock-out stages of the Europa League, despite a drab 0-0 draw with Red Star Belgrade at the Emirates this evening.

It was all change as expected from Arsene Wenger, with an eye on Sunday’s clash with Man City, but much like the previous game there wasn’t much to catch the eye in the performance.

Here’s how the players rated.

PS: Yes, we know we’ve got to get new players added to the system but there’s a worldwide shortage of sprites and bytes and we’re waiting for a shipment to come in.

Could only watch the first half…Zzzzzzzz

I get the feeling blogs is a bit bored of this feature. Or maybe we are just too predictably average so often

Well that was riveting

A whole lot of meh. Someone on the field desperately needs to take charge of the team. You could see that noone was really sure what the game plan was.

Stuck on repeat...
Reply to  Maniac

For this year’s Comic Relief, we should have Coq play upfront.

Lmao,it should be illegal for him to ever shoot again!

Given his last 2/3 performances, it should be illegal for him to ever play again! Same goes for Theo. Inept performances from 2 of our most experienced players

You gonna miss him against City…

I streamed it on my IPad, which was a first, cause an Alpha Male once told me that it wasn’t possible unless you download some app.
He was wrong.

He is clearly a beta male. Or at any rate, you are a better male.

I gave a mate my season ticket for tonight. I don’t think he’s my friend anymore.

I know a guy who’s name is Season. True story.

Our lack of identity is so worrying! We played better football during the banter era.

Song, Denilson and co would kept the midfield ticking over much better. Feel like our B team doesn’t work as well with 3 at the back, caught short in midfield.

The back 3 is also far too narrow in this team. Too many times were our CBs all drawn to just one attacker in the middle leaving the sides completely exposed. We were lucky not to concede from one of the many crosses they had.

To be fair, though, that back three had one actual central defender in it, plus a right back and a midfielder. I wouldn’t read too much into it.

I didn’t help that AMN was often caught wrong side of his marker or generally not well positioned to prevent red star from exploiting the channel between him and Holding.

Stuck on repeat...
Reply to  Nic

Think that was the biggest issue today. Our front was ok, & so was our back. The mid however was just weak even on paper before a ball was kicked, so really don’t get the scratching of heads as to why it didn’t work out. Am all for rotating the squad & giving experience to new young players…but our midfield is just hopeless at the minute even in our first team squad. Jack is doing great, so what is AW’s plan? Play him up front. This just leads to our problems remaining where they are. It’s going to be a… Read more »

There is a very obvious reason for that.
This starting XI only plays in a 3-4-3 because the first team plays that way and the boss doesnt want to change. Otherwise it is filled with players being played out of position or those who are ill-suited to the setup, just to accommodate the setup. These are not players being used to play to a plan, its just players being sent out to do a job which is sort of what they have been doing.

A different George
Reply to  Jagaban05

I would certainly worry if this were our first eleven. But with two kids on the flanks, one in midfield (and in goal), a box-to-box midfielder and a right fullback (with a kid, though an experienced one) in central defense, it’s really hard to talk about “identity.” Instead, think of how useful it is to give Holding these games, without having to worry too much that he will be exposed and have his confidence shaken. We will see the benefits for the next ten years. Think how useful it is to get Jack back to normal 90-minute appearances. And, of… Read more »

Gar14
Reply to  A different George

The second half was solid, if fruitless. Wilshere was our best player by a couple of streets. Final ball was a bit first-day-of-term from the kids, but, you know… kids.

He was very pedestrian most of the time. He cant play as part of the front 3

The real question is, how is Chu-Young still in the system?

Let’s say he has parked himself in the system.

Didn’t think Theo played that badly at all. Tried to make things happen, didn’t get any service to speak of, came back and defended. I think he was offside once…

Really? He hid and shirked as he has done for the last 12 years. Maybe we’ve just got used to it….

A different George
Reply to  ClockEndRider

Hid and shirked? The Troy Deeney school of football analysis.

Giroud was as bad if not worse than Theo last night but I guess he doesn’t get judged by the same standards….

The lack of offsides means he never really “Theod”. But the rest of his performance was all “Walcotted”…& unfortunately that is now never a good thing. He really does continually fail to shine….even in the role of Captain.

Basically, though, we couldn’t make a pass in the final third half the time. Much of that was down to the inexperienced midfield, probably. Maitland-Niles on the left wing probably did best. I still say once this team learns to pass, and pass more quickly, they could really be quite good (same goes for the 1st XI).

Does it matter? We played a second rate side with a second choice side. At no point were we going to lose. Who knows, if we had played 11 rather than including Walcott we might even have won.

I blame the formation ..

While the match may have been dreary, Lalas’ commentary (for anyone who managed to catch it) was thoroughly entertaining. Pure banter.

One of those rare occasions I really enjoyed the commentary. Made a boring match better.

“Arsenal has two separate teams” is the current refrain on the lips of many pundits. But on this showing, it is clear we have just one good team and a contraption – an amalgam of promising youth, Wilshere and a depressing bunch of mature guys heading downhill in the speed of Theo Walcott!
I hope Arsene does not put out this “Team” against West Ham in the Carabao cup: we could be embarrassed! He needs to mix things up.

I don’t understand why we persist with 3 at the back with the B team. We could have played
Macey
Debuchy Elneny Holding AMN
Willock Coq
Walcott Jack Nelson
Giroud
which would leave only Elneny and AMN out of posición and produce a muchos more fluid performance

Apologies all round for my autocorrect ?

From all the reviews and reports, I’m glad I didn’t watch this game. I’m glad we’re through to the next round

Blogs, as an Aussie who knows the pain you alluded to in your bonus rating, I can only say spare us a Fucken thought the next time we have a 2:30am kick off and play like a pack of cunts against a Watford or a West brom.
Now you’ve had a taste of how shitty it is that is hah

Nodding. Wish I had read the posts before posting myself. You summed it up nicely.

‘Bonus rating: 3/10 getting out of bed at 7am to watch this when I could easily have stayed in that bed … ASLEEP.’

Blogs, welcome to life of us Arsenal supporters this side of the world. Every midweek game is earlyish morning, weekend games in wee hours of the mornings.

Its the price we pay for supporting the establishment known as Arsenal.

At one point the announcer said something like , “the key offensively for Arsenal is Jack Wilshere and Theo Walcott”. I hear from my 15 yo son, “ if Walcott is the key, the fucking door better be unlocked”
I love Theo but hard to disagree

Bonus Rating: 10/10 resting all of our players for Sunday in a match that didn’t really matter

Has Wilshere lost his pace and flair? Is this Jack 2.0? If so than I’m skeptical as to his potential future, provided he stays fit.

What game were you watching? Jack was our best player by a couple miles.

Maybe so…but I was aiming at him as an Arsenal player…he is really far away from what he showed in his eraly days…can we expect him to grow back to those hights or did those few extra gears he had just get knocked out of him entirely.

greg
Reply to  The arsenaut

You know what was the cost of Wilshere style of play, don’t you? so to stay on his feet and compete the entire season, he MUST change his game, otherwise, we can tell him good bye in a couple of weeks, nothing more simple to understand.

Agree with the “3” rating of our Captain Fantastic – aka “Young Theo”…or as the case may be “Not so Young anymore & really should be doing better Theo”. He really does fail to shine.

Mind you, he was only off side once, so not sure if it’s fair to say “He Theoed. He Walcotted”. Think this means probably “He Walcotted” in his performance. But lack of off side calls means he never “Theod”.

When does Chambers get back? Coq to the bench and push Elneny into Mid and it’s a different game.

I’d like to figure out how to get AMN into DM too. Somebody more wingish on wingback, and him where he’s best. Hell, put Coq on wingback.

Coq and Dat Guy should both be back for the Cologne game. I think as our injured lads return we’ll see fewer and fewer kids in the second XI, and better and better results.

Here in India people were awake till 4 am to watch that performance.

Jack and Giroud had some excellent chances they got into.

Not saying Jack or Giroud were anyways brilliant but Elneny and Holding left much to be desired as well.

Out fans are a bit shit aren’t they? Boos and jeers at full time, and reading the comments on here…. It was a team of youngsters give them support for fucks sake. 2 things that stood out for me – elneny kept forgetting he was at centre back and what the hell was jack doing up front for 70 minutes? It didn’t work.

i fell asleep in the second half wtf

The same Theo who scored 19 goals last season and scored against some very big teams as well. As he does. He’s a player who has to be constantly playing to get any sort of form. The team was bits and pieces don’t really understand the ire. We are through.

Thats the problem with Theo. The more he plays its better for him but not good for the team. His flaws to his games is what pisses most of us off

It has become so painful to watch Walcott play these days, horrible decisions, constant turnovers and no impact on games in which he should be one of the leaders on the field (regardless of whether he has the captain’s armband or not). Overall quite a boring match.

Welcome to our world blogs. 6am midweek games, often 1am-3am kick offs for the weekend. No wonder us aussies are so relaxed, were just fucking tired all the time.

Was heavily stoned at the front of 121 watching the red star fans having a ball… was there a game on?