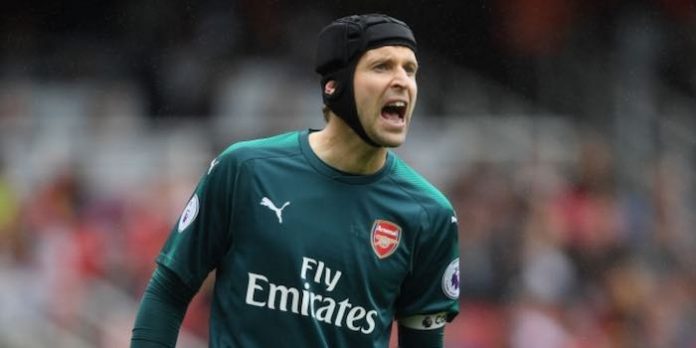 Petr Cech says that there has been no power shift in North London as the Gunners prepare for the North London derby this weekend.

Although last year was the first time the old enemy finished above Arsenal in the table for over 20 years, the Arsenal stopper believes there are always temporary blips, and he’s called on his teammates not to pay too much attention to what they do and focus instead on finishing as high up the table as possible.

The 35 year old was talking to Sky Sports ahead of the crunch clash at the Emirates on Saturday, and was asked about:

“I don’t think so,” he said. “There’s always the odd year where things can change. I think the most important thing for us is to compete with teams in the Premier League for the title and the glory.

“We’re not competing against Tottenham Hotspur. Two years ago, when we finished above them, we were disappointed because we didn’t win the title. This has been the same feeling.

“Our target is to win the title and to be successful during the season and not necessarily to be looking at what Tottenham is doing.”

On why Spurs have got better…

“The big factor was the appointment of Mauricio Pochettino,” he said.

“You can see his work at Southampton showed he was a very capable manager and a good coach. I think for me, that made the biggest difference. They have young talented players and experienced players, their team is very well balanced.

“There was always something missing and the difference was when Pochettino came and you can see it helped them to compete. Obviously, they are in the mix, they got into the Champions League and it’s a big difference.

“Last year was a strange season, we had more points than the previous season but ended outside the top four and the Champions League spots. It was a big disappointment to everybody.

When Tottenham nab our captain, win the league at the Emirates, then finish above us 20 years in a row they can claim to have had a power shift. Having said that, if Mr Florentino Perez could look to the white half (eighth?) Of north London for his next manager and striker it would be appreciated

Poch is a problem. Need him as far away from London as possible asap.

Totally agree SG, whilst they are currently better by a position or so in the league, and have been for over a year this is but their best era in decades, and far from our best. Currently it’s Spurs golden era (finishing 2nd-4th) versus our weakest in twenty years (struggling to claim Champs League spots). Look beyond the last three years (in which time neither team has achieved great significance) and you’d have to say the Premier League years have seen us fight for titles and claim ‘The Invicibles’ as a nickname, whilst Spurs were trying to use the likes… Read more »

He is such a level headed guy. A good speaker and a role model. Just like arteta wish he had joined us sooner. There wouldnt have been no inanimate carbon rod players to about.

They are going to bottle it soon. Don’t worry. Alli is overrated. Lloris and Dier too. Kane is absolute class though. Eriksen comes close and Aldeweireld maybe.. But don’t worry, they will bottle it. They are bigger bottlers than us.

You’d have to be a pretty hard-headed gooner to not concede that Sp*rs are a stronger side than Arsenal at the moment. In that sense, a ‘power shift’ has happened. It’s whether they can capitalise on their golden period and our relative weakness to win some trophies etc that will decide whether the shift is permanent or temporary.

He also talked about Özil and Sanchez, but well… who cares. Fans are funny, they demand commitment, but have already forgotten them.

Last I Cech…we was also behind Spurs so yes we should be looking at them bc we are competing as much against them as Chelsea united or City.

I’d prefer we do the business first and beat them before we talk about the absence of any “power shift”.

On the field Spurs are better, off the field we’re ahead. This sums up Kronke’s vision and what’s to come.

Are we even ahead off it? For now, sure. But they have a new stadium coming in, that will get lucrative NFL money. I dunno, I think the more Arsenal fans bury their head and just claim “we’ll always be best” without evidence is exactly how we’ve ended up where we are in the first place. For a while now, it’s been obvious they’ve been coming, but fans and the club have been “bah, it will never happen”. Then it happened and it was “oh it’s just once. Not gonna happen again”. Now it’s looking like it’s happening again and… Read more »

Whilst our recent past has been certainly better than their recent past what we need to pay attention to is the direction of travel. They are very much in the ascendency whilst we must admit to being stagnant at best. Spurs haven’t even started spending big money yet and already are arguably better run, more ambitious and better on the field. It’s hard to turn things around once your going one way.

Wouldn’t mind Pochettino as the next Arsenal manager. Step up for the manager and a young capable replacement for the club

Spurs won’t win the title. And they won’t pay their stars more than 150 per week so soon the best players will leave. Their manager will leave, and arsenal can reclaim their top four trophy.