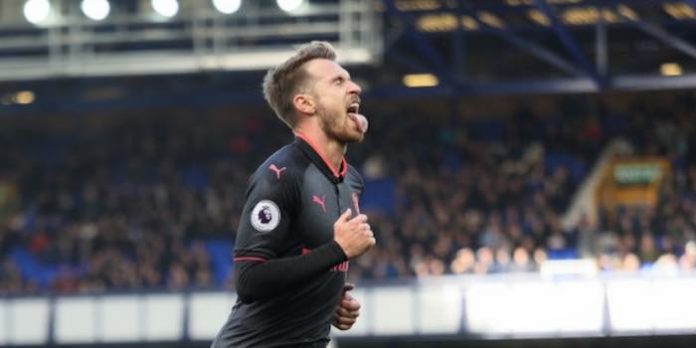 Chris Coleman has confirmed that Aaron Ramsey was only scheduled to play one of Wales’ two friendlies this weekend, hence his early return to Arsenal from international duty.

There were worries that the midfielder had picked up a knock in last week’s 2-0 defeat to France in Paris, but those fears have been allayed.

“Coming into the camp we knew we were only going to have him for France,” Coleman said ahead of tomorrow’s game with Panama.

“No matter how he felt afterwards we decided it would be one game for Aaron Ramsey.

“I think coming into the camp because of what’s been happening with him at Arsenal in terms of his fitness we thought one game would be better than two.

“That was the thinking, he’s gone back to Arsenal. He will be available for them at the weekend.”

Arsenal’s medical team will no doubt be kept busy towards the tail-end of the week as the rest of the international brigade return to London Colney. Already there are doubts over French duo Olivier Giroud and Laurent Koscielny.

Rambo is the key in this system!

Fortunately! The system is made for him. I’m not inventing anything: Wenger said it last season. And too bad if some more skilled players are played out of position.

Actually he’s correct, whether you agree with him or not, Ramsey is being tasked with being the ‘glue’ between the midfield and forwards. It’s not quite working as intended in my opinion yet either though.

Wenger´s instructions maybe his demise – but he is really a very good footballer which is being asked to do a free roaming role with bursts into the box which maybe isn´t what he´s best suited for.

I actually think that is what he’s best suited for, the problem is it’s hard to accommodate that when Oezil, and Sanchez somewhat, is doing the same thing.

Exactly. Late bursts into the box and a first time finish is classic Ramsey. He needs to maintain his fitness now and his form will pick up. Here’s to hoping for a screamer from him against sp*rs.

He is best in the Ozil role.

Wenger is trying to accommodate both but it could be at expense to maximum efficiency for us.

Yep last season his late bursts into the box resulted in 0 goals and his classic finish in the 90th minute of the last game of season that saw us finish out side top four first time in 20 years and below the scum. He celebrated like we had just won the league. A good player in a mid table team (like wales might be, though probably a championship team) but not in s team that wants to win leagues. Just not good enough I’m afraid. Shame.

He just won us the fa cup against Chelsea, scoring seconds after they had equalised! I don’t know about you but I certainly wasn’t thinking about our league position at that moment in time…some people are so negative and unhappy.

I’m not suggesting he’s not a good footballer but the thought of him, or any of our players for that matter, being the glue in a system which lacks any resilience is frankly laughable.

In this analogy there is no glue, only estranged objects moving independently of one another.

He’s played the link role before to good effect.

Last seasons dash for 4th at the end and the season before he held for a spell next to Flamini.

His trouble is when the goals dry up, his better instinct is to go forward and that presents gaps next to bless ideal players in the deeper role defensively.

I think the root of the problem up front is:
1) The amount of times our players (attackers and midfielders) lose the ball (esp retardedly stray passes)
2) Lack of Penetrating midfield creativity

That Chris Coleman fellow, what a very decent chap he is…

I don’t understand this Ramsey hate by (some) own fans! It’s true he has not managed to hit his 2013 form, but I don’t think anyone can question his attitude and work rate. He’s Arsenal through and through, puts in a shift every time he’s on the pitch and never sulks whatever position he’s made to play. Some people are just so hard to please.

You must have not seen the ‘shift’ he put in at Liverpool. Mainly involved light jogging or looking the other way.
He is a good footballer though. Just thin a top 4 team can get better. Look at the quality of the best teams in his position. He needs to create more too.

Exactly when has he indicated he wishes to play in Spain? He always looks to me as if he loves playing for Arsenal. It’s purely in your inagination

Oh ffs, read it realistically; there’s not a hint there of any burning ambition–or any real ambition–to play in Spain. If there had been stories of interest from Juventus or Bayern, he would have said the same about playing in Italy or Germany.

Too Drunk To Be Offside
Reply to  BoomXhakaLaca!

Now you see all those things that you described as his ‘qualities’ – are just what is expected of him in an Arsenal shirt. That is the bare min he could do, and that is not good enough.

Kwame Ampadu Down
Reply to  BoomXhakaLaca!

I think Rambo is a good player but not good enough to be a first 11 player in a title challenging side. Does that qualify as ‘hate’ these days? Just curious.

I think a large part of Ramsey hate is due to Wenger himself and indulging him.

Ramsey is no where near De Bruyne, yet the latter spoke of the collective and how he’s not even allowed to make flashy backheel passes, under Guardiola’s instruction. That’s arguably the best midfielder in the PL.

Yet Ramsey will make as many backheel passes to his hearts content, with no repercussions from Wenger.

That pisses people off. He’s always too quick to go for the flashy or the goal, at the expense of the basics.

“He’s Arsenal through and through”
Hmmmm, I’m not sure about that.

During his peak purple patch, he spoke of his ambition to play for Madrid. Something tells me if had carried on with that form, he would’ve happily courted Madrid.

And that’s half the issue people have with Ramsey. It’s not that he isn’t good, but in that there is a selfishness as individualism to his play only matched by the likes of Sanchez and Ronaldo. Problem is, he’s not on their level.

I think you need to read Vonnie’s post again. Maybe see if the lobotomy can be reversed.

We could play Jack next to Granit.

He may not last the intensity and will need to be subbed …likely Coquelin.

Other option is Iwobi. He is strong and has quick feet. Good eye for a through pass too.

Thumb them down thumb then down god damn it! All the ramsey haters thumb them we need airsupport!