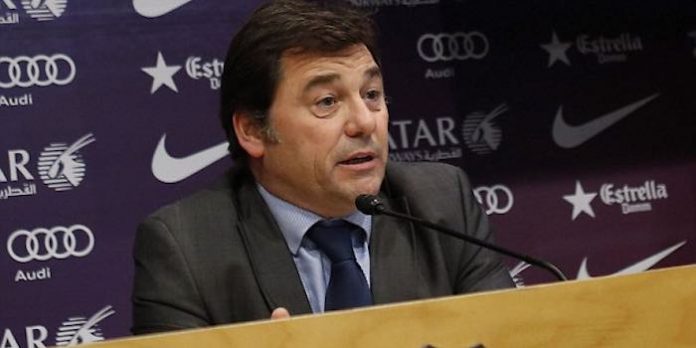 Last month stories emerged about Arsenal’s desire to appoint a Barcelona executive to a new role entitled Director of Operations.

The man in question is Raul Sanllehi, reportedly a close friend of Ivan Gazidis, and somebody who has vast experience behind the scenes at one of the biggest football clubs in the world.

With an aging board, it’s been imperative for some time that Arsenal prepare for the future, and last week a significant announcement was following the capture of Borussia Dortmund’s Sven Mislintat.

Now it has emerged that Sanllehi has left his position with the Catalan giants and could become the latest backroom addition, perhaps as early as the end of the week.

It’s a sign that as a club we are future-proofing, preparing for life without Arsene Wenger, and that can only be a positive.

With work to do in the January window, as well as potentially having to replace both Mesut Ozil and Alexis Sanchez next summer, the more hands and experience we have on deck the better.

Fingers crossed. Definitely need more footballing knowledge in the board room. Positive steps being taken perhaps with Raul and Sven

And it’s high time greasy sir chips gets the chop as well.

Looks like things are happening behind the scenes, but I’m skeptical, truth be told.

It’s all pointless in my opinion, unless we sack Boro Primorac.

What has Boro Primorac done/not done?

Pleased with the names. Sort of sounds like Ivan has been on holiday and brought back two legendary bartenders from Magaluf. Sven and Raul from that Scandinavian bar with all the blondes.

If this happens I’ll have to apologise to Ivan, catalyst of change, really happened

‘Competing with Bayern’ still seems a way off though…

taking 3-0 against Paris… I think we could definitely compete.

I agree, I think effecting change in any work environment is difficult enough, just dealing with office politics at a low level is infuriating enough, I can’t imagine trying to catalyse any type of change in an organisation as big as Arsenal. It’s never as simple as just turfing people out and get new people in, it would be foolish to presume otherwise. Looking at clubs like Everton who are looking at their third manager this year, perhaps the decision to keep Wenger, no matter the outcry may not actually of been the worst decision if it’s all part of… Read more »

I feel Gazidis is not as worse as he is been projected.

I feel your English is more worser than projected.

You really are the grammar teacher, Bastin. I am no native speaker of the language, Bro: more worser than projected just leaves a sour taste on the palate. And here you want to correct someone’s English.

Truth with a dose of optimism at the end. Nice work Hamilton!

…oh and most change should really be empowered and led (preferably by example) from the top.

This is almost as exciting as a new big-name signing for the team. Club leadership needs a massive overhaul and this bodes well for the future, if it happens. Fingers crossed.

Sanchez and Ozil may yet have a change of heart and decide to stay with us after all but if not, I now have faith in the club finding suitable replacements.

It’s impressive how many players (and now staff) have been traded between Barca and the Arsenal over the years. It’s nice to see us finally taking something from *them*.

Although I wonder if an agreement like this has any Ozil-sized strings attached.

Glad to see that something is being done at least.

Will any credit be given to Gazidis if this turns out to be true?
Great choice for Head of Recruitment
Great choice for DoO if this happens.
Changes to our backroom staff (Darren Burgess) and structure
StatDNA purchase (like it or not, he’s at least trying to modernise the system)
Updating facility
Significant investment and changes in the academy (which had fallen way behind other top clubs)
Heck he even wanted a change of management.

I know blogs love a dig at Ivan, but fair is fair, he seems to at least be doing his part.

On the hand these choices/selections aren’t made singlehandedly. Who’s to credit is unknown.

Concerned that StatDNA is just a tool to push our ‘purchasing strategy’ into one which aligns with the owners intention to just make a profit.

Things are in place because Stan wanted them that way.

The only way we get true change is from the top, and unless this guy has the swearing ability of Ramsey on a Kitchen Nightmares episode, we probably won’t get too much long term change since everything can be vetoed by Stan.

sounds exciting . could the next manager be in line already and ivan is clearing things up for him?

I think of this team, minus Venga, plus Tuchel or Jardim or Martinez or Owen Coyle

How many pints must man down, before he writes like this? (Apologies to Dylan!)

This makes me feel really good. I think as fans we don’t appreciate enough these sort of appointments. That’s probably down to the issue of playing personnel.. .some others are just disillusioned by Wenger’s stay and till he leaves as far as they are concerned, nothing good can happen at Arsenal

Great news. Also, how does one pronounce his name?

What happened last season with Arsene’s contract is beginning to make sense to me. The club was not ready for that transition and all the current restructuring of the back room staff points to that. It seems that it would have lead to a catastrophe if Wenger had left with the structure we had in place would.

These are much welcomed changes.

Why leave now…. he has what to work with finally.

Do we really need any of that?

I was under the impression that we’ve always got the better of Farca in negotiations.
I hope this is not the dude who paid us a total of 75m quid for the likes of Hleb, Song, Vermaelen and Fabregas!

I still reckon they got Fabregas on the cheap, £30m (if that?) for the best central midfielder at the time in the Premier League was a steal given we got £25m for Nasri the same season and someone like Pastore was going to PSG for €42m.

The other three I can’t argue with though. How on earth we got £15m+ for him is still a mystery to me.

Given the quality of the player, yes, it was an absolute steal. However, if we remember how much Fabregas himself was pushing the issue back then, perhaps 30m was not too shabby.

Didn’t we also bank some money on top of that, when he moved to Chelsea?

When a player goes ‘on strike’ to get that move (with zero interest in moving to any other club), that does weaken the clubs ability to get a decent price for him.
Fabregas cost us a lot of money by doing that, at a time when we were desperate for money.

Must say Wenger will leave the club in a very very healthy position with a new stadium, new training facilities, world class academy and the highest cash reserves in world football.
If the Sanllehi deal is done then credit to Ivan for walking the talk.

That dictator Wenger will not let anyone interfere with this club!

I was being sarcastic*

2018 will probably see the biggest buying spree in Arsenal’s history: Özil and Sanches must be replaced, probably by players that will cost more then 60m each. There is also room for improvement in defence and midfield, we could be looking at 200m or more. This will require researching a big number of prospects and many parallel negotiations, a huge operation.

I suspect a lack of capacity is at least partly responsible for the Thomas Lemar deal not going through last summer. Next time around, there might be four Lemars in play at the same time.

Let’s hope he has the ability to beat this board into shape!

He should make the board and Ivan read Running a Football Club 101 for Dummies before he agrees to sign.

Work to do in January? I won’t hold my breath