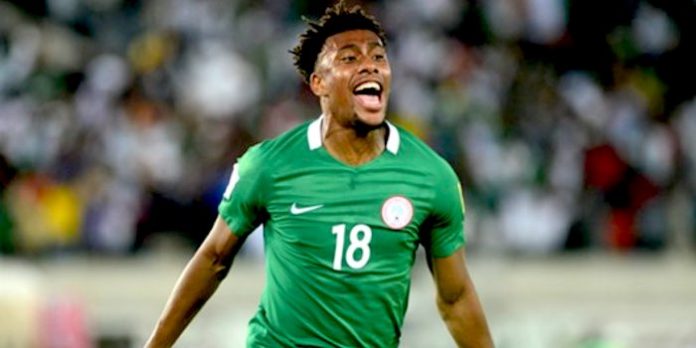 Alex Iwobi got himself on the scoresheet twice this evening during Nigeria’s 4-2 win at Krasnodar Stadium, Krasnodar, which is just off the Krasnodar Road.

The Arsenal man’s first brought the Super Eagles level, making it 2-2 six minutes into the second half.

His second sealed the victory, and it was some goal too. He picked the ball up on the edge of the box, nutmegged veteran Javier Mascherano and then finished beautifully with his left foot.

His two goal haul follows on from his critical strike last month when his goal helped send Nigeria through to the World Cup finals in Russia next summer.

A winner against that lot on Saturday is the next step. Take it away, Alex!

That second goal was pure class. A nice confidence boost for him.

First one was pretty good too. Good movement to make the space and a calm finish.

I watched the game and I was really impressed with the Nigerian team’s togetherness and commitment, it was really nice to see. I’m really happy for Iwobi, he looked very promising for us when he first broke through then his progression seemed to stall for a bit and it was the right move from Wenger to just completely take him out of the first team for a short period of time. Hopefully he’s back on the rise again because I genuinely believe he has the quality to become a top top player for us. I say play Iwobi and King… Read more »

I’m not a big french speaker myself, but i do know a few choice words – did the commentator drop a “medre” after Iwobi’s second…as in $hit that was good?!

We need him to start and ozil to benched on Saturday. We was superb today against Argentina with the likes of Mascherano and Otamendi in the Argentine defense. Showed real quality in a big match with Nigeria the big underdog

If England beat Brazil 4-2 people would go insane, this is as impressive imho

It’s even better. No doubt Argentina is the better team than Brazil currently.

Dunno If feel they are, they barely qualified.

I’d say it’s far more impressive given how much more established England is as a footballing nation and how much more players they have available to them. It would be the equivalent to Wales beating France 4-2 in the last friendly last week. England came up with two goalless draws and they media is acting like they won the World Cup. What really pissed me off was an idiot on BBC using Argentina’s loss to Nigeria today as an example of how the South American teams are all underperforming at the moment, and that England was a huge step up… Read more »

The English managed to qualify quite easily from a very very very tough group that had the strongest footballing nation. England winning the world cup with the likes of Tammy Abraham with Gareth Southgate as their coach

Iwobi is a fine player and great prospect but let’s not compare him to A world class player. If we want to beat Spurs we need our most creative player who has created more chances than any other player this season. I just cannot understand why so many people cannot see this.

They probably can’t see I think because they seldom see Ozil in big matches.

Maybe instead of just creating chances we need players who can make and finish them.
But that celebration needs some work.

Yup. Therefore we must start laca

lee dicks on
Reply to  Martin

It comes back to Wenger in my opinion. Having Ozil sanchez and lacazette on the pitch for only 70 minutes this season is nothing short of criminal.
It is not ozil’s fault there isn’t a stable midfield base for them to go and perform.

Ozil was great for Germany too. I’m just happy that they’re playin well and hope the game do it against the scum this weekend.

I don’t think Low cares about Ozils form for Arsenal. He knows where and how to get the best out of Ozils talent. The German midfield and defense provide a great support/cushion for Ozil to carve out chances, and of course the forwards make full use of the chances.
At Arsenal, well that’s a whole other story….

Have to agree on this.

That second goal is a thing of beauty!

Great victory for Nigeria. Even as a Nigerian, I must say I didn’t see that coming. Iwobi was an inspiration to watch. Instrumental to all the goals. Good days to watch Nigeria’s super eagles play. I hope he can replicate such performances wearing Arsenal’s shirt.
#COYG.

Congratulations on the win, I thought it was an outstanding performance. I’ve been following Nigeria for the past year and I’m so impressed by their youngsters. They also have a lot of other youngsters that have the option to play for Nigeria but currently play for other countries’ youth teams like Akpom and Tammy Abraham. As a neutral that’s not English or Nigerian, I’d chose to play for Nigeria over England any time. They actually have a quality group of players who seem to get along really well off the pitch – which is reflected on the pitch. Happy days… Read more »

Thoroughly enjoyed the game, as a Nigerian of course. Iwobi is class; a good enough replacement for Ozil, and seeing that he’s only 21 with room improvement he could be an upgrade.

Fuck me, the bit of skill, the pace, the execution. All was perfect for the 2nd goal.

I still doubt his ability as a player. However if he can keep this up… fingers crossed.

Thanks iwobi we really need you on our next game

I don’t think Arsene will start him on Saturday because he played 90 mins tonight. Front three will likely be Alexis, Ozil and Lacazette against that lot. Iwobi has shown that he can be reliable and if he has started adding goals to his game then he is getting closer to the complete package.

“I don’t think Arsene will start him on Saturday because he played 90 mins tonight.”

Lacazette has also played 70 minutes of football – and counting – today. He’s on a hat-trick, btw.

Love the way he was calling for the ball in his first, almost as if he knew he would score. Keen ‘me coming son. Plus he retained his ‘gunner celebration’.

As a Nigerian gooner, this kid fills me up with joy every time i watch him play. Was superb today. Top top top quality.

Easy on the pressure now mate.

What a quality player.

We’ve done alright bringing in some players in recent season …Coquelin, Bellerin, Iwobi …Nelson Nketiah on the horizon…lest we forget Jack from a slightly different era.

I think Iwobi is a genuine option for us.

If we can get a Draxler or a Mahrez (god forbid both) to replace the likely outgoing Alexis and Ozil…Iwobi will be in the mix with Say Ramsey in the two behind the front man Lacazette.

Think the Mahrez boat has sailed now. He should have left when Kante did to fulfil his potential

Anyone can score beautiful goals in the run of play, but can Iwobi come in with six minutes to go in a 4-1 blowout, fall over in the penalty box and then take the PK when you have barely broken a sweat? Only one striker is greatest enough for that kind of contribution!

Two very clinical finishes from a young man on his way up. Hope he takes this game as the marker that will help propel his Arsenal career forward

I don’t care I would start both Iwobi and Welbeck ahead of Sanchez and Ozil on Saturday. Maybe it’s too early to start Welbeck but I feel like we through too many sticks to Ozil for disappearing in big games meanwhile Sanchez does the same. We need committed players to start upfront. And I feel it’s about time Wenger start to switch back to a back 4 because it allows Ozil to play in his preferred role and add another striker upfront. He seems to hate the idea of leaving either Monreal or Kolasianac on the bench and that’s he… Read more »

If Iwobi was playing under the guidance of Mauricio Pochettino he’ll be great because I see so much similarity between Alex Iwobi and Dele Ali though they’re both Nigerians. Iwobi isn’t doing much for Arsenal all because of Arsene

I’d like to see Iwobi as a CM next to Xhaka, with Ramsey more forward.

Does anyone know if he plays a little further forward for Nigeria than for Arsenal? Getting lots of goals!

To be honest. I feel iwobi would thrive in the dele alli-esque role if offered the chance. His last season in u23 he was banging in goals when moved to center forward