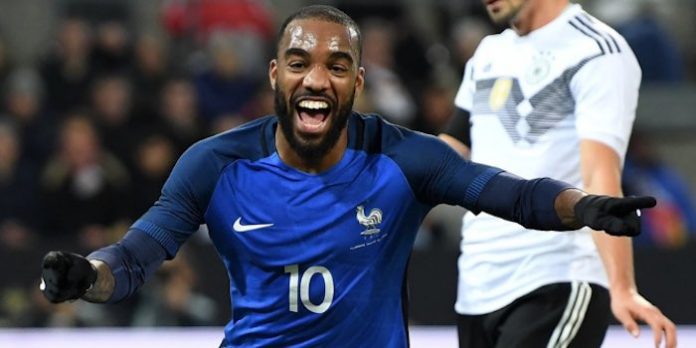 France , and there was big Arsenal involvement in all the goals.

First, Alexandre Lacazette was provided a tap-in by some lovely Anthony Martial play in the German box.

Then Mesut Ozil provided the perfect throughball for Timo Werner to equalise for Germany:

Then Lacazette popped up with his second:

And Ozil was involved in the German equaliser with a lovely pass.

Hopefully it augurs well ahead of Saturday’s North London derby, and that the front three that we deployed against Everton can cause the Sp*rs defence some problems when they come to the Emirates.

Assuming, of course, that we don’t see another odd selection by Arsene Wenger. Surely not for this one though. Surely not?

It comes on top of Alex Iwobi’s two goal haul for Nigeria against Argentina, so while Christian Eriksen made headlines for his hat-trick against Ireland, the Arsenal men were getting their sights set-up too.

Heh, it ended 2-2 with an *amazing* Ozil pass for Germany’s 2nd at the last minute!

Pretty sure it was a draw blogs. You been on the iron juice again?

I don’t think it would be odd to put Ozil on the bench for this game. Odd for Arsene, yes. But honestly I’ve been unhappy with our #11 for a while now. He still has not signed a new contract. He was invisible against Man City except when making a run for a ball over the top like he’s a) going to fight for it and b) finish a chance. Ozil is never going to fight, I’m sorry he’s in fact a fucking pussy, and we should be playing fighters against Spurs. Nothing but Arsenal men through and through. Think… Read more »

Although I somewhat agree with what you’re trying to say, Ozil is not a pussy, and has made plenty of nice runs in behinds to score some screamers (ludagarets wonder goal) or give an assist. And I don’t buy the “he’s lazy” argument, that’s just a lazy assessment. The finger should be pointed at the manager who I’m almost certain gives him instructions not to come back in defence, and to get ready to start a counter attack. If you look at the distance covered every game you’d see that not only is he not lazy, he’s always one of… Read more »

Too true. Our play is horrendous failing to link up properly in attack and being over all the place while exposing ourselves in defense. We truly are well messed up at the moment

A P
Reply to  Mississippi Gunner

I rather bench Alexis.

This attitude that somehow dropping Ozil would improve our current state really jars me. Lots of pundits have had an agenda against him for years, and it’s like their lazy assessments have finally seeped through to our own fan base. It drives me crazy because he’s really not been any worse than the majority of the other players in our squad this season. Hardly anyone’s shown up for us because the manager simply hasn’t laid out any kind of fucking system. Like which player in our squad has been playing well enough to deserve a spot ahead of him? I… Read more »

I didn’t say he was lazy. He definitely runs a lot. I said he was a pussy. I mean, fuck the meathead pundits who constantly peddle his laziness every time we lose, but shit. I’m sick of his feigning challenges and half-pressing. It’s ok to tackle people sometimes Mesut. I’m sick of defending his unique, elegant abilities when they get us no where if his teammates aren’t as good or if he narrowly misfires. Jesus Mesut, sign a contract or gtfo. Thanks for your Ludogoretz goal. That was nice.

Huh, haven’t seen such a clear through ball from Özil for us in quite a time, I believe. I guess this is what we expected to see at least a bit more frequently with Lacazette’s arrival. But I think he wasn’t 1 on 1 with a keeper for us yet, right?

It would help if they played together more often.

Well, they might be teammates for just another month or two, so I guess now it’s time to find out if they would click…

That’s Özil when he plays 10 and not on the right to please Ramsey and before Oxlade-Chamberlain.

Well, technically he was playing on the right for Germany, as Gündogan was playing in the number 10 role. But he was roaming around as usual, worked hard for every ball, even defensively, and had a great game

Lacazette bloody knows how to finish

Ridiculously good. His movement for the second is brilliant as well

I swear to God If Lacazette doesn’t start on Saturday I’m going to sell my house, wife and car and go live as a hermit in Indonesia feeding gorillas.

I was thinking about how furious I’d be Saturday if he wasn’t starting, don’t think I would go that extreme though.

How much do you intend to sell?

A Different George
Reply to  Nathan

There are no gorillas in Asia, but otherwise an understandable reaction.

I remember Ozil being our best player of the season, I fell in love with him and he became one of my best players ever and he still is. I would watch his individual video compilations for each and every game. His touches, vision passes, genuine joy to watch. How the media lambasts him at every chance, and I won’t speak about some of our own fans, is ridiculous for me. I really feel it’s in his best interest to leave us, not only because of the treatment he gets, but because of how arsenal don’t really provide the platform… Read more »

Exactly as I feel too. Thank you. I just don’t get the hate and under-appreciation that Mesut has to put up with. We never have a balanced squad, he’s a playmaker, and even he can’t work miracles if there’s no play to be made. The German national team is full of movement ahead of him and a good solid defence behind him, Arsenal is all over the place and the manager sets up the team to fail. I suppose it’s just easier to blame Mesut than take a cold hard look at everything going on around him, our non-existent midfield… Read more »

why cant we see the first lacazette goal

Ozil has never been the weak link…we have far greater issues.

But some players tend to be unfair lightning rods for criticism. Flamini, Per, Giroux to name a few far better than their critics would like to suggest.

At the same time some players get the benefit of the doubt too easily…Jenkinson, Holding, Elneny even Koscielny…make mistakes but the same voices turn a blind eye.

As for Lacazette, we need to play him in the big games. Not so sure what the thinking has been there.