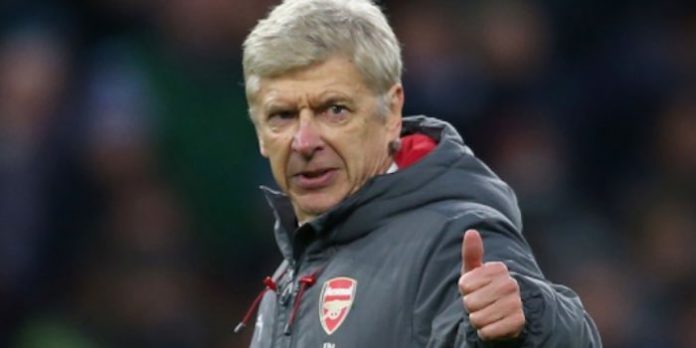 Arsene Wenger has paid tribute to his back three following Sunday’s 1-0 win over Burnley, and said he demanded more from his side at half-time.

The Gunners second half performance in which they dominated territory ultimately led to a mistake at the back, James Tarkowski’s foul on Aaron Ramsey which provided Alexis Sanchez with the game winning moment.

Afterwards, the Arsenal manager pointed to his three centre-halves as key performers on the day.

“We kept a clean sheet and they were really up for it, Burnley,” he told the official Arsenal website.

“We won 1-0, but I’d like to congratulate our three centre-backs again today, because they did a remarkable job.

“I give us a merit today because we didn’t concede a goal. Our defence worked well again and we were relentless in the second half.

“We kept our heads and in the end we got the penalty that we wanted.”

Wenger’s half-time chat sparked an improvement in the second period, and despite not scoring Arsenal were on top for those 45 minutes plus the two minutes of injury time.

“The first half was an even game but in the second half it was all us,” he continued.

“We changed our organisation a bit at half-time and I told the players that we were at 80 per cent of what we could do.

“We had to get more out of ourselves in the second half and I think we did that much better.”

For more on yesterday’s win, check out today’s Arseblog: Clarets give Gunners a push over the line

Burnley away is a tough match, they have decent players and a noisy crowd. Leaving aside the diving tactics they use.

We did well to come through. Apart from United and Liverpool we have mid table opposition through a lot of the rest of 2017 so have a chance to consolidate and move upwards in the table, if we maintain the same commitment.

‘Apart from Manure and liverpool’? Its almost December Mate:)

8 matches to go until the end of the year. All the rest are mid table or lower, so we have a great chance to pick up points if we concentrate and play hard.

Over 20% of the PL matches in the season are before the end of the year.

You have certainly earned your name.

There are no easy games. Especially away from home given our away form so far.

True, though there are lots of matches that theoretically we ‘should’ win, no saying that we will without the concentrating and playing hard mentioned above.

I don’t think there are really any easy games in the Premier League anymore. When those mid table teams come to Arsenal, they see the stadium, see the pitch, and they’re bang up for it. We tend to forget as Arsenal fans its always a big deal when these smaller teams come to London, so the players always want to make a good account of themselves, as they don’t want to get humiliated, so we’ll still have to be at our best to beat them. I think this sort of lackadaisical approach to the smaller teams at home in recent… Read more »

Monreal is a gem in that back three

If Mustafi can keep playing like he has in the last two games we have a quality back three. Loving his new found aggression.

He always had that aggression in him, he just found a way to channel it properly

Indeed the defense was grand in the first half and the midfield was superb in the second half. In the second half we pinned Burnley in their own half and our defenders (Kos especially) played like an additional body in midfield. We were quick to recover the ball and as a result they never got the chance to swing in a single cross to their towering striker that was brought on.

Mustafi has been brilliant

I would love to hear a recording of one of Wenger’s halftime chats. He is always so composed during interviews, would be interesting to see if he keeps that composure/what he says to actually motivate the players.